Frances Perkins (April 10, 1880–May 14, 1965), Franklin D. Roosevelt's secretary of labor from 1933 to 1945 and the country's first female cabinet member, Page 750  |  Top of Article molded New Deal welfare and labor legislation. Daughter of Susan Bean and Fredrick W. Perkins, a businessman, Fannie Perkins (she later changed her name to Frances) was born in Boston, raised in Worcester, and attended Mount Holyoke College in Massachusetts from 1898 to 1902. In 1910, Perkins received a master's degree in economics and sociology from Columbia University in New York, and became executive secretary of the New York City Consumers League, where she lobbied for maximum work hours, workplace safety, and other labor laws. Outraged by the 1911 Triangle Shirtwaist factory fire, Perkins and others demanded that the state legislature act, leading to creation of the Factory Investigation Commission, cochaired by state senator Robert F. Wagner and assembly leader Alfred E. Smith. Perkins testified before the commission as an expert witness, became its chief investigator, and arranged surprise factory visits for lawmakers. Based on the commission's findings, New York enacted more than thirty laws protecting industrial workers.

When Smith became governor of New York in 1919, he appointed Perkins to the state Industrial Commission and heeded her advice on labor and welfare policies. In 1929, Governor Franklin D. Roosevelt elevated Perkins to the post of industrial commissioner of New York. Once the Depression hit, Commissioner Perkins became a leading advocate for unemployment insurance and direct federal aid to the jobless.

As President Roosevelt's secretary of labor, Perkins helped establish the Civilian Conservation Corps, the Public Works Administration, and the Federal Emergency Relief Administration. She insisted that the National Recovery Administration (NRA) codes include wage and hour standards and that they prohibit child labor. After the Supreme Court declared the NRA unconstitutional, Perkins backed the Wagner Act, guaranteeing labor's right to collective bargaining. She also had Labor Department lawyers draft a minimum wage, maximum hour, child labor-banning bill. A modified and weakened version of the bill passed Congress in 1938 as the Fair Labor Standards Act.

In June 1934, President Roosevelt created the Committee on Economic Security, with Perkins as its chairperson, to formulate a social security program. Working with scores of experts and state and federal officials, often with conflicting views and interests, Perkins delivered to the President recommendations that became the basis for the 1935 Social Security Act. Disappointed by the law's exclusion of farm, domestic, and some other workers, she fought for the rest of her life to extend social security to everyone.

Rising labor militancy and the split between the American Federation of Labor and the Congress of Industrial Organizations complicated Perkins's job. Though she was neutral and urged reconciliation between the AFL and CIO, each accused her of favoring the other. On her advice, Roosevelt refused to use force in the 1934 San Francisco Longshoremen's and general strike and in the wave of sitdown strikes. This angered management and conservatives, as did Perkins's refusal summarily to deport Harry Bridges, the radical leader of the San Francisco strike. In 1938, the House Committee on Un-American Activities demanded her impeachment, but dropped the matter after a few hearings.

Perkins's and the Labor Department's role diminished during World War II as Roosevelt created independent wartime agencies to mobilize industry and labor and to curtail strikes. President Harry S. Truman accepted Perkins's resignation as secretary of labor in July 1945, subsequently appointing her to the Civil Service Commission, where she stayed until 1953. Perkins remained active, writing, lecturing, and teaching at Cornell University, until two weeks before her death. In 1965, Secretary of Labor Willard Wirtz summarized her importance: "Every man and woman in America who works at a living wage, under safe conditions, for reasonable hours, or who is protected by unemployment insurance or social security, is her debtor." 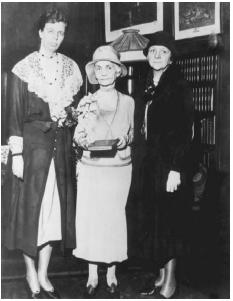 Severn, Bill. Frances Perkins: A Member of the Cabinet. 1976.