It may be goodbye to Gaddafi, but it's far from Mission Accomplished

Asked in 1971 for his opinion on the French Revolution of 1789, Premier Zhou Enlai of China is said to have replied; "It is too soon to say."

Those laptop bombardiers who have rushed to celebrate the fall of Tripoli, congratulate the Libyan rebels, eulogise Nato and mock the critics of military action against Muammar al-Gaddafi would do well to heed Zhou's words. The fighting in Libya is far from over, and a secular, liberal democracy isn't-yet-on the horizon. It is too soon to rush to judgement, too soon to declare victory and move on.

Let me be clear: I despise and loathe Gaddafi, a vile and vicious dictator. In fact, I loathed him in 2004 when Tony Blair was hugging him in the desert and bringing him in "from the cold"; I loathed him in 2009 when Senator John McCain was shaking his hand and, according to US diplomatic cables released by WikiLeaks, promising to "provide Libya with the [military] equipment it needs"; I loathed him last year when David Cameron was selling him sniper rifles and tear gas.

So I won't be shedding any tears for the brutal colonel as he flees the advancing rebels. The question now is: what comes next? The imminent demise of Gaddafi might be the beginning of the end of this conflict, which began in mid-March. But, on the other hand, it might only be the end of the beginning. Indeed, recent history suggests it would be wise for the interventionists to refrain from triumphalism.

Allow me to take you on a short trip down memory lane. Let's start with Afghanistan. "Support for the Taliban is evaporating ... they are in total collapse," a jubilant Blair told the House of Commons less than 48 hours after the fall of Kabul in November 2001. Three hundred and seventy-nine British troops have since been killed in Afghanistan by the Taliban-led insurgency. A decade on, we have been forced to switch from war-war to jaw-jaw: on 23 June, Foreign Secretary William Hague confirmed that the UK had made "contacts" with the evaporating Taliban.

Next up, Iraq. On 1 May 2003, three weeks after the fall of Baghdad, George W Bush arrived on a US aircraft carrier in a flight suit, stood in front of a "Mission Accomplished" banner and smugly proclaimed: "In the battle of Iraq, the United States and our allies have prevailed." But most of the hundreds of thousands of military and civilian deaths in Iraq occurred after Bush made his hubristic statement - as did the Abu Ghraib torture scandal, the siege of Fallu-jah, the 2006 sectarian war and the 2007 surge. Violence continues to blight Iraq. This month, insurgents launchedawave of co-ordinated and deadly attacks across the country, killing at least 89 people and wounding more than 300.

And dare I mention Kosovo, long mythologised as a model of liberal intervention? "Unnecessary conflict has been brought to a just and honourable conclusion," declared Bill Clinton on 10 June 1999, the day the Nato bombing campaign came to an end. Yet, in the subsequent months and years, hundreds of thousands of Serbs and Roma were driven out of the province in acts of "reverse ethnic cleansing" by the newly empowered Albanian majority. In December 2010, Kosovo's prime minister, Hashim Thaci, a darling of Nato and friend of Blair, was accused in a Council of Europe report of having exerted "violent control" over the heroin trade and dabbled in organ-trafficking.

Unlike in Kosovo and unlike in Iraq, the US and UK governments secured UN backing--and the support of the Arab League - for the bombing campaign against Gaddafi. Civilian casualties were minimised; a ground invasion was avoided. 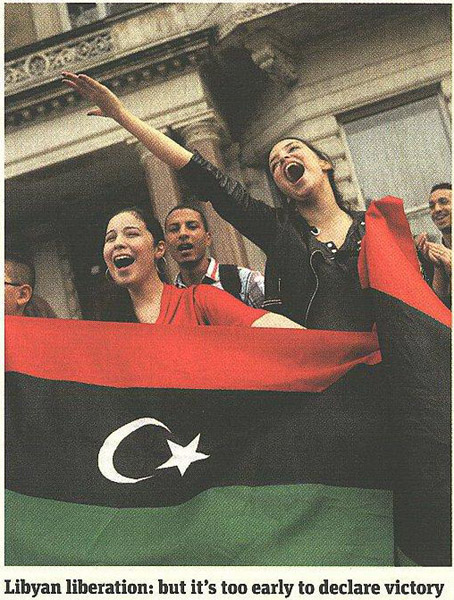 Nonetheless, those who suggest Libya could be a template for intervention are deluded. It was sold to us as a short, sharp, humanitarian intervention to protect the innocent inhabitants of Benghazi; it then morphed into a political intervention to force regime change. The US president, Barack Obama, promised that it would last "days, not weeks"; but the bombing campaign against Gaddafi's ragtag army dragged on for six months. The Chancellor, George Osborne, promised thatthe cost of military action would "be in the order of tens of millions of pounds, not hundreds of millions"; the MoD now says it has spent [pounds sterling] 200m.

The costs could continue to rise. Evidence is mounting that western governments may do a U-turn on the question of ground troops - or "peacekeepers", as they will now be called. In May, in little-noticed remarks to a security forum, the US admiral Samuel Locklear, commander of Nato's Joint Operations Command, suggested a "small force" might be necessary following the collapse of Gaddafi's regime.

On 23 August, Richard Haass, president of the Council on Foreign Relations, wrote in the Financial Times that Obama might have to "reconsider his assertion there would not be any American boots on the ground". Yet such a move would risk provoking a bloody backlash from the rebels - especially those of the Islamist variety.

But there is another, bigger, more long-term danger. This "victory" for Nato in Libya will only embolden those hawks - both neoconser-vative and liberal-interventionist - who have been licking their wounds since they pushed for the catastrophic invasion of Iraq. I expect there will be renewed calls for Nato to intervene in other conflict-ridden parts of the globe. Patient diplomacy, economic carrots and "people power" revolutions will once again take a back seat to US-led military action. The default response to a foreign crisis will be to send in the bombers. Call me old-fashioned, but I tend to believe that war should be a last resort, not the first or only option.

Mehdi Hasan is senior editor (politics) of the NS