Tunisia: 'change will take time': a year after the coalition government of Tunisia was elected, and just under two years since Mohamed Bouazizi set himself alight sparking the Arab Spring, Intissar Kherigi, a Tunisian human rights lawyer and activist (and daughter of Ennahda leader Rached Ghannouchi), writes in a personal capacity on the challenges facing Tunisia's new government

THE WORLD WAS MESMERISED BY Tunisia's sudden sprint to revolution, as surprising as it was short. As the warm afterglow of unity and solidarity has faded away, the jubilant sprint has given way to a gruelling marathon.

Tunisians have now been left with the tough task of transforming their revolutionary spirit into a meaningful, structural change, and the country's first democratically elected government now faces the challenge of translating the revolution into new policies and concrete actions.

The challenges facing the government, made up mostly of former political prisoners and human rights activists, make the days of opposition seem easy in comparison. There is a high demand for jobs and reforms in the security, justice, police, civil service, education and transport sectors, amongst others.

Freedom of expression has enabled, for the first time, a frank discussion of social issues, shining a light into the darkest corners and unleashing a process of discovery of decades of social problems that had festered beneath the cover of repression.

All this takes place against a background of continuous counter-revolution by those who refuse to play by the new rules of the game. Across government, a political battle of wills between reformists and entrenched forces is being pitched. Thus, facing the government is an array of diverse and contradictory demands.

These demands, which drove Tunisians to take to the streets in December 2010, can be reduced to two core themes--jobs and justice, the foundations of a dignified life and a just and equal society. 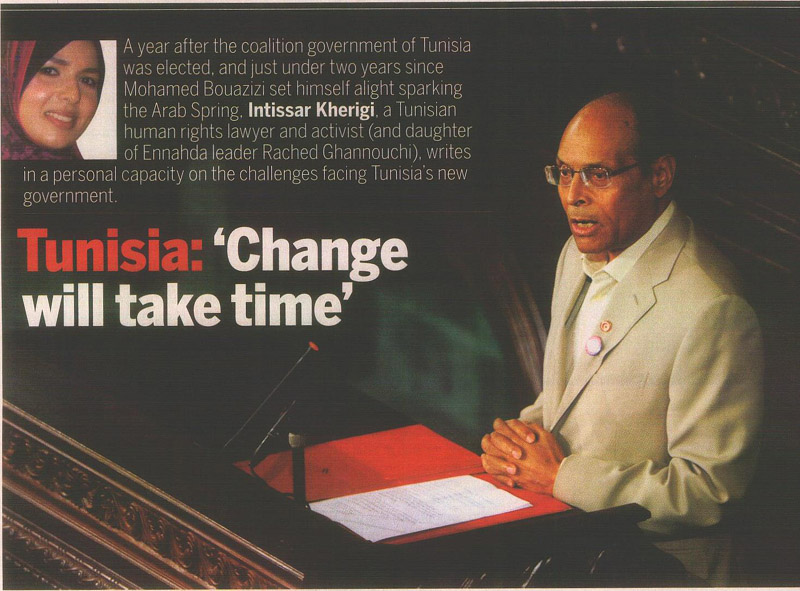 Job creation requires economic growth, which in turn requires stability. Justice, on the other hand, requires deep-seated reforms and the overturning of the existing system of corruption, patronage and impunity, which threatens to endanger the stability needed for economic growth. This tension forces the government to walk a tightrope between stability and reform.

These tensions are exemplified in the area of security reform, perhaps the most complex of the policy areas. The police and internal security forces were former President Ben Ali's most prized instrument of repression, and are widely reviled by Tunisians. It was police mistreatment--Mohammed Bouazizi's altercation with a policewoman--that sparked the entire revolution. Yet the continued functioning and cooperation of law enforcement agencies are critical to the stability and security of the nation; it is the key to Tunisia's economic wellbeing, particularly in the area of tourism, which contributes nearly 7% of GDP and 450,000 jobs.

In the instability following the revolution, tourist numbers halved, falling from 7 million tourists in 2010 to 3.5 million in 2011, with approximately 100,000 jobs being lost as a result, and foreign reserve inflows slashed in half.

The first task of the new government was, therefore, to restore security. Doing this required relying on, and gaining the trust of, the internal security forces, while simultaneously removing and prosecuting those members of the security forces responsible for violations, and putting in motion a programme of serious reform to train the security forces in their new role of protecting the population as opposed to the government.

Transforming this huge dysfunctional beast--estimates put the security forces at 100,000 to 200,000, more than the UK's police force, for a population one-sixth of the size--has proven to be a minefield. The first task of the new interior minister, Ali Laarayedh--a political prisoner of 16 years previously tortured in the basement of the very ministry he is now heading--has been to get to grips with a labyrinthine network of security forces, including the police, National Guard, Presidential Guard, SWAT forces, and Judicial Police.

Within this network lie sub-networks of allegiance built by the former government to maintain its grip on security. The dangers of disrupting these were demonstrated by the fate of the post-revolution interim interior minister, Farhat Rajhi. When he attempted to introduce sweeping reforms by sacking a number of senior officials, he was forced to step down, having lasted only two months in office.

This episode provided a stark lesson in how sudden radical reform could prove destabilising and ultimately ineffective, signalling to the coalition government that if it is to succeed, it must pursue a different path. Interior minister Laarayedh has instead opted for a policy of gradual reform, seeking to weaken existing power structures by demoting senior officials and transferring others. He has come up against numerous institutional obstacles.

Five weeks after taking charge, he demoted Moncef Laajimi, head of the Security Intervention Unit responsible for firing on and killing protesters during the revolution. Laajimi called on the help of his loyal unit, who barricaded him and went on strike, leaving several areas and key installations with no protection.

This is only one example of a battle of wills that is taking place across government ministries, with new ministers coming up against a web of institutional obstacles, power configurations, and bureaucratic obstructionism.

Any assessment of the achievements of this government must take into account the internal obstruction and complexities of breaking up these networks faced by ministers, as well as the challenge of inheriting a governing system eaten up by decades of corruption and designed to execute orders, not innovate solutions.

In the other side of the balance lies the economy. The right to employment and a decent standard of life drove the Tunisian revolution, uniting urban unemployed graduates with mine workers in deprived inner regions. One of the most pressing issues is the escalating number of unemployed graduates, with some 50% of those with higher education left without a job. 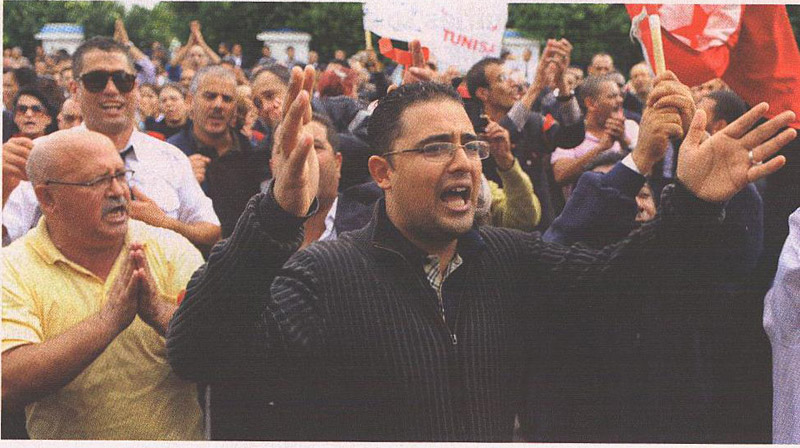 GDP growth had already slowed in 2009-10, due to the global economic crisis and its impact on Tunisia's main trading partner, Europe. The revolution further dented the economy, with growth plummeting from 3% in 2010 to minus 1.8% in 2011. Thousands of strikes and sit-ins took place nationwide--an estimated 3,000 in Sidi Bouzid alone, the birthplace of the revolution. This has not helped, disrupting industrial production, paralysing transport networks, and resulting in the loss of 40,000 jobs as 120 foreign companies withdrew from the country.

The government's strategy has been to restore stability and confidence and increase spending to generate employment and attract investment. It has managed to stabilise Tunisia's key sectors of manufacturing, tourism and agriculture.

Whilst tourist numbers dropped by a third after the revolution, numbers have rebounded in 2012, with hotel occupancy rates almost back to pre-revolution figures. GDP growth went from minus 1.8% in 2011 to 3.2% in the first half of 2012. Growth and government investment resulted in over 90,000 new jobs in 2012. Unemployment fell from the first to the second quarter of 2012, in comparison to the same period in 2011.

Foreign direct investment has been rising, and has even exceeded pre-revolution rates, reaching 942.3m Tunisian dinars at the end of the first five months of 2012, an increase of 14.4 % compared to the same period in 2010. The most pressing issues remain persistent high unemployment and vast inequalities between coastal areas and interior regions, stoking social tensions. Nearly 70% of the unemployed are under 30 years of age due to a significant increase in graduates since the mid-1990s that has been unmatched by a similar rise in labour demand.

The public sector has been unable to absorb the rising tide of graduates whilst demand in the private sector has remained limited, providing mainly unskilled jobs. In the tourism sector, for instance, only eight out of every 100 jobs are suitable for those with post-secondary school education. This leaves many young Tunisians with the paradoxical situation that the more educated they are, the less employable they find themselves.

Significant results will take years, if not decades, to achieve. The government is currently drafting a new investment code in order to rationalise investment laws, improve governance, and remove barriers to entrepreneurship and investment, creating more skilled jobs, but this will take time to bear fruit. It is crucial to remember that when the Tunisian people took to the streets in December 2010, they fought to bring down not just a reviled tyrant but an entire system that oppressed their lives for over 50 years.

The dismantling of that system and rebuilding of a new just democratic order is a complex balancing act between multiple actors and conflicting factors--reform and stability, economic growth and social justice, accountability and reconciliation, liberalisation and government intervention, decisive action and consensus-building.

The lifting of censorship has opened new spaces for public debate, unleashing a process of self-discovery as society is finally allowed to examine its problems in all openness. However, the opportunities to establish a new political culture are being threatened by vested interests, partisan politics and ideological polarisation.

The coalition government must manage these centrifugal forces whilst maintaining stability and pushing ahead with a clear plan of reform. In each area of reform, they encounter resistance from entrenched elites used to dictating the rules and manipulating results to their ends.

Democracy cannot be dictated, but must emerge through consensus-building and bargaining. Government reform has been slow in a number of key areas, but if we want to have real consultation and public dialogue, and create real stability and economic growth, we must accept that reform will take time.

Despite numerous challenges and the relative inexperience of the new government, it has largely managed to maintain stability and grow the economy, which are the primary concerns of Tunisians according to numerous surveys. Reform initiatives are underway in the fields of justice, transport, security, foreign policy, agriculture and human rights. Change will take time. We are witnessing none other than the painful birth of a new democracy, a deep struggle between competing structures of authority and a shift in the country's institutions and modes of governing.

In this formational phase, a certain amount of trial and error is to be expected. These challenges require that opposing parties bridge their ideological divide and use this opportunity for a process of consensus-building, not trench warfare. Among all the challenges facing the new Tunisia, this is the deepest, and requires not just a change of policy but a change of mindset by all of us.

Intissar Kherigi is a human rights lawyer and activist. She studied Law at King's College, Cambridge before specisalising in human rights. She has worked in the UK's House of Lords, the UN's Security Council and a number of human rights NGOs.