Return engagement: Justin Wilson takes himself off the IndyCar driver market by re-signing with D&R, but other big names remain in play

One of the key questions about the 2011 IZOD IndyCar Series was answered in November when Justin Wilson, who was pondering opportunities with several teams, opted instead to re-sign for a second season with Dreyer & Reinbold Racing. In his exclusive Web blog for RACER.com, Wilson said the progress he felt within the team this past season was key to his decision.

"There really is a lot of untapped potential here, and a lot of talented people," Wilson said. "If we stay focused, keep on having a very logical pattern of what we're doing in testing and carrying each plan out to the letter, there's no reason why we shouldn't be winning races in 2011."

D&R has yet to announce the remainder of its team, with Mike Conway, Tomas Scheckter and Paul Tracy all hopeful of racing for the team. Meanwhile, free agent Tony Kanaan raised eyebrows by testing the De Ferran Dragon team's Dallara, and China's first F1 test driver and GP2 racer Ho-Pin Tung also put himself in the mix by testing for FAZZT. The Canadian team is working hard to add a second car alongside team co-owner Alex Tagliani for 2011. 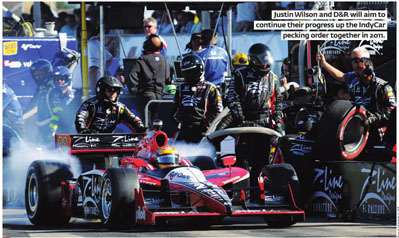 Graham Rahal continued to loom off-stage, too. His announced sponsorship package with Service Central increasingly looked to be headed toward a third car program at Chip Ganassi Racing.