Much can happen in a decade. At the end of 2001, the 20-year-old Fernando Alonso was preparing himself for a year as test driver for Renault, after making a name for himself in his rookie Formula 1 season with Minardi. Now his role at another Italian team, the world's most famous car marque, ranges far wider than just driving the car. He's become Ferrari's talisman, its motivator and very clearly its No. 1 driver.

The fundamentals haven't changed, though. In '01, what caught the eye was how Alonso regularly qualified 18th in a car only good enough for 21st. Ten years on, Alonso still outperforms his car. A string of fifth places on the grid benchmarked the Ferrari on pure pace, yet Alonso earned 10 podiums and was in the running for second place in the championship all the way to the last race in Brazil.

It could have looked even better had he not so often lost positions while struggling on prime tires in the final stint--and, indeed, had he not been punted off the road by eventual winner Jenson Button in Canada. But, all things considered, Alonso sees it as a positive season.

"Definitely from a personal point of view, my feelings are very positive about the 2011 year," he says. "Obviously, we're not happy with how competitive we were--winning only one grand prix is not enough for Ferrari. But if you take the 2011 season as a preparation for our next big opportunity, I think it was a huge step forward regarding the weak points we had in 2010. We made massive improvements in some of the areas where we weren't strong enough: when we have a competitive car, the team in general is now very prepared."

So what went wrong in 2011? As ever, there is no single answer, but there was one major weakness, and that was the aerodynamics of the Ferrari 150 Italia. 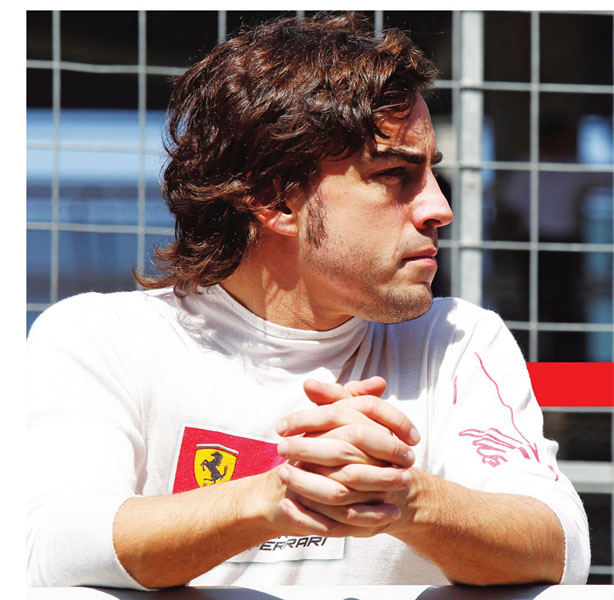 "In 2011, all competitive cars were built around the blown diffusers," says Alonso, "and we were a little bit behind that concept from the beginning until the end. After the first couple races, we realized we had a problem, especially in the wind tunnel--a correlation issue and there were some races that were a little bit of a mess. We put parts back on from the launch car in January because we discovered that car was quicker than the car we were racing at the time."

As a result, it was not long before it began to look unlikely that Alonso would be adding to his 2005 and '06 crowns.

"I think the championship hopes finished at the Belgian Grand Prix in August," he admits. "The gap [to the Red Bull Racing RB7s] had been huge, but because of how the 2010 championship went to the last race, we still wanted to keep pushing until the last moment. But at Spa we had a big upgrade for the car, and it was still not competitive."

Ferrari also struggled more than others to get a proper handle on the new Pirellis. It seemed that the car couldn't use its tires hard enough to generate enough grip in qualifying, although that in turn often created an advantage in the races.

"After the pit stops and in qualifying we often seemed to lack some pace. It happened in two or three consecutive races--Nurburgring, Hungary, Spa when we were second or third and then we finished fourth or fifth. The car was performing well, and then you put on a different type of tire, you improve your times but the others are flying. They maximized much more than us on some types of tires. It was frustrating, but it was a lesson to learn, because if we want to be stronger next year, it's better that we learn this year."

Given Ferrari's weaknesses, Silverstone proved to be a perfect storm--not only did the damp track at the start mean there was no requirement for Alonso and teammate Felipe Massa to use the harder tire at the end, but also, for one race only, blown diffusers were reined in by the FIA.

It also happened to be the 60th anniversary of Ferrari's first World Championship grand prix win--an ideal way to celebrate: "It was like destiny!" agrees Alonso. "Right from the morning, the day was a bit different. A sunny day which is unusual at Silverstone--and everything was perfect. Then I did the laps in the 1951 car [the ex-Froilan Gonzalez car which won at Silverstone 60 years earlier], which I really enjoyed. Overall, Sunday was very special."

Ferrari has said that in 2012 there'll be a lot more winning. There's been a lot of talk about a more aggressive approach, but talk is cheap. What has Alonso seen that inspires genuine confidence?

"First, this year's cars were built around the blown diffusers," he replies, "so next year without that possibility, everyone will start more or less from zero. So that will be a help for us, because we were not very well developed on diffusers.

"We also had problems with some of the stuff that we reorganized, and like I said earlier, issues with the wind tunnel correlation. We all made mistakes--with the design of the car and the way we prepared for the 2011 season. But that, in a way, is very positive because we're sure that we will not have those problems again."

The man charged with turning around Ferrari is chassis technical director Pat Fry, who joined from McLaren on July 1, 2010. Alonso may not have enjoyed his curtailed stint with the British team in '07, but clearly he has a lot of respect for Fry.

"I was happy with him. He was the guy who prepared the 2007 car at McLaren, so I had a close relationship with him, and obviously it's a huge help for Ferrari to have him now in an important role. With many years' experience in motor racing, he knows how to deal with specific problems, and he brings different philosophies to Ferrari, in some of the areas where maybe Ferrari was not especially developed or good. You can learn from everyone."

Meanwhile, Alonso himself continues to develop. He for one believes he is better now than when he took those two titles with Renault. 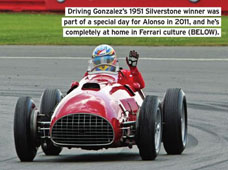 "Now I am a much more complete driver," he declares. "Maybe in a single lap or in a race situation, it hasn't changed too much. But in overtaking maneuvers, at the start, pit stop approach, or in mental preparation to the race, I think in '05 and '06 I was much weaker than now."

So it's ironic that he hasn't won the World Championship since then. He came within a whisker in '07 with McLaren and in '10 with Ferrari, but he's not too bothered by the title drought. 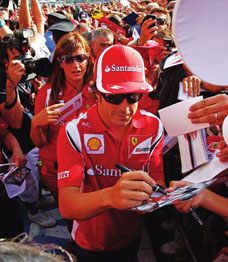 "I know I could have more championships," he says, "but you can't move forward by looking back. You need to look at the present and future. I'm totally confident that a championship will come sooner rather than later, because I'm in the perfect team to do that. I have more motivation than ever, so it only needs time.

"Hopefully not much more time," he adds, "because I'm 30 and I don't know how many years I will be here. But I'm at the peak of my career and I'm in the best team. I don't have any doubts that championships will arrive."

It's intriguing that Alonso says he doesn't know how long he will be around, given that this year he extended his Ferrari contract until 2017, giving both parties unprecedented security.

"I'm committed to Ferrari," he states. "The two years that I've spent here have been a great experience. I've felt at home from day one, and I still have this feeling after two years. We share values, we like competition and we like motor racing. The Italian people, the Italian culture and the way they deal with things is very similar to mine.

"So the next five years I'm committed to the team. That allows us to be completely relaxed--not only me, but also the team itself, so it can build a long-term program with no doubts that I'll always be fully committed to Ferrari. And it was important for me to have their commitment to do this, because I'm ready to give 110 percent for them." H 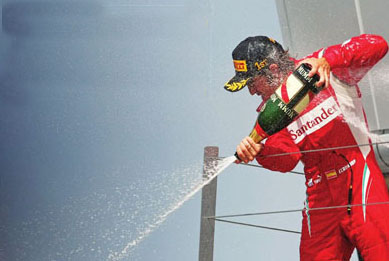 Fernando Alonso has racked up six wins in his two years at Ferrari. In the same period, teammate Felipe Massa has managed just five podiums and no victories, and this past season, he didn't finish higher than fifth. No one seriously expects him to be at Ferrari in 2013.

So why is a driver who came within 20 seconds of winning the '08 World Championship no longer good enough? Massa's life-threatening accident in July '09, when a spring shed by a rival car struck Massa just above the eye as his Ferrari was traveling at 162mph, is one possible factor. It's plausible he's lost something in his driving. There are flashes of speed, but he's very inconsistent. Some who are close to Massa privately even speak of noticing changes in his character, although it's speculative to tie this to the crash.

Other factors? Well, he's struggled to get his tires up to temperature in qualifying over the past two years but that's a Ferrari trait. Then there is Alonso himself. Even Massa at his '08 best would be expected to lag behind the Spaniard, albeit not to the extent that he has done.

Some also point to his lost victory in Germany last year, which Ferrari ordered him to give to his teammate. But while that was a clear dent to his confidence (coming a year to the day after his accident) Massa was 0.5sec off his teammate in qualifying and was fortunate there were no McLarens between him and the lead when Alonso and Sebastian Vettel slowed each other up on the run to Turn 1. In other words, it was a one-off circumstance.

Massa is Ferrari's weak link. Over the last two years, we've seen enough of him to say that, if he ever was a top-liner, he isn't anymore. Next year, he must shape up or ship out and, unfortunately, it's hard to see him having the tools to do the former.