About the Author: The Forty-seventh United States Congress passed the Chinese Exclusion Act in 1882; ten years later the Fifty-second Congress renewed the act's provisions and strengthened Chinese immigration laws with the Geary Act.

The California Gold Rush in the late 1840s sparked the first major wave of Chinese immigration to the United States. U.S.-Chinese trade relations had been in place since 1784, and Chinese immigrants had been a part of American immigration for decades, though their numbers had been very small. News of California gold reached China just as China's empire experienced economic hardship; by 1851, more than 25,000 Chinese had emigrated to the west coast of the United States.

Chinese immigrants initially came as gold prospectors but many settled into mine work, laundry services, and as peddlers of household or mining goods. Discrimination and outright resentment of the Chinese ran high among native prospectors; mine owners often exploited Chinese workers by paying low wages, fellow prospectors forced Chinese prospectors to work depleted mines, and violence against Chinese immigrants was common.

In the 1850s, many Chinese immigrants began to work on railroad construction; in the 1860s, the Central Pacific Railroad specifically recruited Chinese workers for jobs on the Transcontinental Railroad. Anti-Chinese sentiment ran high after the Civil War, when former slaves, poor southerners, and migrating eastern immigrants from countries such as Ireland and Russia moved west in search of opportunity. Viewing the Chinese immigrants as competition for jobs, nativist sentiment led to scapegoating and increased discrimination against the Chinese. In 1871, an anti-Chinese riot led by white men in Los Angeles led to the killings of more than twenty Chinese immigrants.

An 1876 report on Chinese immigration from the California State Senate, titled "An Address to the People of the United States upon the Evils of Chinese Immigration," increased federal interest in Chinese immigration. An 1877 report from the Joint Special Committee to Investigate Chinese Immigration claimed that Chinese immigrants took jobs away from white immigrants, were unable to understand democracy as they came from "despotic" government systems, refused to learn English, and would harm the republican ideals of the United States by their presence in large numbers on the west coast.

In 1882, the forty-seventh Congress passed the Chinese Exclusion Act, and President Chester A. Arthur signed the act, with strong public, labor union, and government support.

An Act to execute certain treaty stipulations relating to Chinese Whereas in the opinion of the Government of the United States the coming of Chinese laborers to this country endangers the good order of certain localities within the territory thereof: Therefore,

SEC. 2. That the master of any vessel who shall knowingly bring within the United States on such vessel, and land or permit to be landed, any Chinese laborer, from any foreign port or place, shall be deemed guilty of a misdemeanor, and on conviction thereof shall be punished by a fine of not more than five hundred dollars for each and every such Chinese laborer so brought, and may be also imprisoned for a term not exceeding one year.

SEC. 3. That the two foregoing sections shall not apply to Chinese laborers who were in the United States on the seventeenth day of November, eighteen hundred and eighty, or who shall have come into the same before the expiration of ninety days next after the passage of this act, and who shall produce to such master before going on board such vessel, and shall produce to the collector of the port in the United States at which such vessel shall arrive, the evidence hereinafter Page 379  |  Top of Article 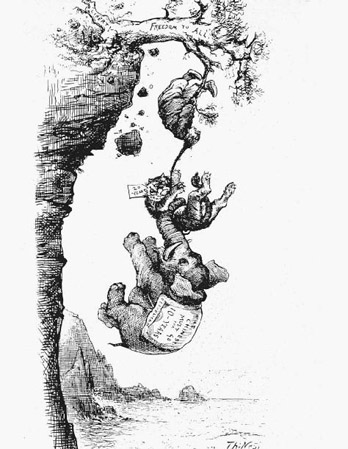 An editorial cartoon about the Chinese Exclusion Act of 1882. Supporters of the bill are shown in stylized form trying to pull a stereotyped Chinese man off of a branch labelled "Freedom to All." The tiger represents the Democrat's Tammany "Tigers" political machine. The elephant is a traditional symbol of the Republican Party. © Hulton Getty/Liaison Aisonagency. Reprodued By Permission Page 380  |  Top of Articlein this act required of his being one of the laborers in this section mentioned; nor shall the two foregoing sections apply to the case of any master whose vessel, being bound to a port not within the United States, shall come within the jurisdiction of the United States by reason of being in distress or in stress of weather, or touching at any port of the United States on its voyage to any foreign port or place: Provided, That all Chinese laborers brought on such vessel shall depart with the vessel on leaving port.

SEC. 6. That in order to the faithful execution of articles one and two of the treaty in this act before mentioned, every Chinese person other than a laborer who may be entitled by said treaty and this act to come within the United States, and who shall be about to come to the United States, shall be identified as so entitled by the Chinese Government in each case, such identity to be evidenced by a certificate issued under the authority of said government, which certificate shall be in the English language or (if not in the English language) accompanied by a translation into English, stating such right to come, and which certificate shall state the name, title or official rank, if any, the age, height, and all physical peculiarities, former and present occupation or profession, and place of residence in China of the person to whom the certificate is issued and that such person is entitled, conformably to the treaty in this act mentioned to come within the United States. Such certificate shall be prima-facie evidence of the fact set forth therein, and shall be produced to the collector of customs, or his deputy, of the port in the district in the United States at which the person named therein shall arrive.

SEC. 8. That the master of any vessel arriving in the United States from any foreign port or place shall, at the same time he delivers a manifest of the cargo, and if there be no cargo, then at the time of making a report of the entry of the vessel pursuant to law, in addition to the other matter required to be reported, and before landing, or permitting to land, any Chinese passengers, deliver and report to the collector of customs of the district in which such vessels shall have arrived a separate list of all Chinese passengers taken on board his vessel at any foreign port or place, and all such passengers on board the vessel at that time. Such list shall show the names of such passengers (and if accredited officers of the Chinese Government traveling on the business of that government, or their servants, with a note of such facts), and the names and other particulars, as shown by their respective certificates; and such list shall be sworn to by the master in the manner required by law in relation to the manifest of the cargo. Any willful refusal or neglect of any such master to comply with the provisions of this section shall incur the same penalties and forfeiture as are provided for a refusal or neglect to report and deliver a manifest of the cargo.

SEC. 9. That before any Chinese passengers are landed from any such line vessel, the collector, or his deputy, shall proceed to examine such passenger, comparing the certificate with the list and with the passengers; and no passenger shall be allowed to land in the United States from such vessel in violation of law.

SEC. 10. That every vessel whose master shall

knowingly violate any of the provisions of this act shall be deemed forfeited to the United States, and shall be liable to seizure and condemnation in any district of the United States into which such vessel may enter or in which she may be found.

SEC. 13. That this act shall not apply to diplomatic and other officers of the Chinese Government traveling upon the business of that government, whose credentials shall be taken as equivalent to the certificate in this act mentioned, and shall exempt them and their body and household servants from the provisions of this act as to other Chinese persons.

SEC. 14. That hereafter no State court or court of the United States shall admit Chinese to citizenship; and all laws in conflict with this act are hereby repealed.

SEC. 15. That the words "Chinese laborers," wherever used in this act shall be construed to mean both skilled and unskilled laborers and Chinese employed in mining.

Ten years later, Congress renewed the act and passed the Act to Prohibit the Coming of Chinese Persons into the United States in May 1892. Commonly known as the Geary Act, named after Congressman Thomas J. Geary of California, the 1892 act increased restrictions on Chinese immigrants. All Chinese immigrants were required under the Geary Act to carry a certificate proving residence and legal status in the United States; no other immigrants Page 382  |  Top of Articlewere required to carry such documentation. Failure to produce such documentation on demand from law enforcement officers could lead to deportation or forced hard labor sentences.

In addition, the Geary Act denied Chinese immigrants the right to post bail and to appear as witnesses in court. The Geary Act extended the Chinese Exclusion Act for ten years; by 1902 it was renewed once more with no expiration date.

Anti-Chinese sentiment decreased over time as development, urbanization, and expansion on the west coast lessened economic competition. By the end of World War I, immigration was a powerful force in shaping the United States demographically and culturally, though the Chinese Exclusion Act remained in place with Chinese immigrants as the sole object of such targeted legislation. The 1943 Magnuson Act repealed the Chinese Exclusion Act, though a quota of 105 Chinese immigrants per year was set. In 1945, more than six thousand Chinese women were permitted to enter the United States as part of the War Brides Act. Chinese immigrants did not receive equal legal treatment until the Immigration Act of 1965, which set a limit of 170,000 immigrants per year, with no more than 20,000 immigrants from any one country.