The proliferation of technology during the 1990s obviously affected schools around the country. As Vice President Al Gore said regarding the expansion of technology in schools in remarks to the 1994 National Education Association Higher Education Conference, "the net result will be to elevate our ability to equip the children and adults seeking education in this nation as we have never been able to do before." Computer technology became a necessary addition to the infrastructure of every school in the nation. Indeed, in some ways it redefined the concept of "school" through its ability to allow instruction and interaction to happen in more than one distinct location simultaneously. What once was a luxury became a requirement for schools. As the decade progressed so did expectations of students, parents, and employers about the school's ability to provide the necessary skills to function in an increasingly technical world.

As the use of the Internet became more commercialized in the latter part of the 1990s, it is hard to remember it was originally intended to connect university and government researchers across the nation and eventually the world with each other's data. A change in its use occurred when publishers wished to print their materials online. Copyright became an issue and programmers were set to develop methods of limiting access to what had been free information. Copyright infringements and the wide interactive nature (through email and chat rooms) provoked active debates about the regulation of the Internet, often prompted by concerns that since anyone could publish to the World Wide Web, then children could not be protected from harmful materials or people.

Teachers comfortable with the technology lauded the interactivity, the immediacy, and the globalization of the information. The possibilities of discussions with students in foreign countries, the ability for students to publish, and the chance to gain access to a wide range of government information led teachers to encourage students to access materials outside their classrooms in a way that could not have happened before. Consequently, the Internet became a favored tool, and its use as an educational conduit was recognized across the country. Between 1994 and 1998, Internet access in public schools increased from 35 to 89 percent, but the percentage of classrooms with access only went from 3 to 51 percent.

Recognizing that schools with severely limited resources would begin to lag even further behind other schools, the Clinton administration took steps to equalize the ability of schools to provide Internet access to their students. In 1996, as part of the Telecommunications Act, the Universal Service program was born. Commonly known as the "E-rate," the program structured a series of discounts for schools and 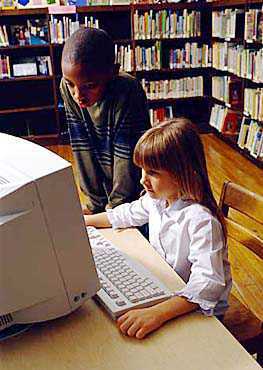 Technology becomes an integrated part of school curriculum. O'Brien Production/Corbis.
libraries to help defray the cost of telecommunications and Internet technologies. The details of the controversial program were left to the Federal Communications Commission (FCC), which inaugurated the program in May 1997. The FCC determined several guidelines, including which schools and libraries were eligible to receive discounts, the amount of discounts that schools and libraries could receive, and what services were eligible for discounts.

Overseen by the Schools and Libraries Division (SLD) of the Universal Service Administrative Company, the program received over 62,000 applications in its first two years of operation. Funding requests topped $2.435 billion by the second year, and far exceeded the first year's requests of over $2 billion. Originally slated to have a budget of $2.25 billion per year, the FCC cut the program's funding for the first year to only $1.2 billion, thereby forcing the SLD to deny or significantly reduce the grant to each school. It was clear, however, that schools and libraries saw an imperative for increasing their accessibility to the Internet and were prepared to present plans that outlined their specific needs.

In spite of the growing popularity of the Internet, some opponents of the E-rate felt that schools should be spending their money in other areas-that the vast, unpredictable, often unreliable, and in some cases unmanageable glut of information available on the Internet was more glitz than substance. Still others objected to the method used to provide the discounts-mandated fees to providers (such as long distance companies) that inevitably were passed on to consumers.

As rapid as the growth was in terms of the use of the Internet, both socially and as a teaching tool, the use of the computer in other walks of educational life expanded almost as quickly. Schools that originally used their computers to teach computer science were now bombarded with requests to teach computer applications as well, or in some cases, instead. The computers were no longer the province of the "nerds"; their use was a requirement of all students. Schools struggled with issues of how technology fit into the curricula. If teachers were expected to use technology to teach, should students be expected to demonstrate their competence in basic technology? Better yet, what were the basic technology skills? How did research skills fit into that picture? Did schools teach the use of a specific applications product? These questions plagued many schools as they tried to determine not only how to make use of the technology, but how to measure the cost effectiveness of their expenditures.

Whereas most students felt entirely comfortable with computers and accompanying technology, and in many cases, expected its use, teachers required more convincing. Fears of increased plagiarism, dismay at redirected funds, claims of "making life easier," and unwillingness to look foolish in front of students who were obviously better versed in the use of the technology were but a few of the stumbling blocks faced by administrators trying to convince teachers of their technology plans. Others, recognizing the revolutionary changes that technology wrought in the business world, called for an immediate increase in its use.