Mapping the West. From 1867 practically to the end of the nineteenth century a series of geological surveys led by Clarence King (1842–1901), Ferdinand V. Hayden (1829–1887), and John Wesley Powell (1834–1902) explored and mapped the West. Carried out under the aegis of the U.S. Army Corps of Engineers, King's survey of the Fortieth Parallel (the “Great Basin” between the middle Rockies and the Sierra Nevada) in 1867 was mainly utilitarian in its objectives: King had justified the survey by claiming it would stimulate the discovery of mineral deposits. His books The Mining Industry (1870) and Systematic Geology (1878) were products of this survey.

Searching for Dinosaurs. Hayden, who joined the Interior Department in 1867, organized a survey of the western territories, pushed for the establishment of Yellowstone Park (which was authorized in 1872), and became first director of what was then called the U.S. Geological and Geographical Survey of the Territories. Hayden established the tradition of attaching paleontologists to geological surveys, his best ones being Edward Drinker Cope, well known for his studies of dinosaurs, and the great paleobotanist Leo Lesquereux. Insofar as geology was concerned, the results of both the King and Hayden surveys were stratigraphic, mapping layers of 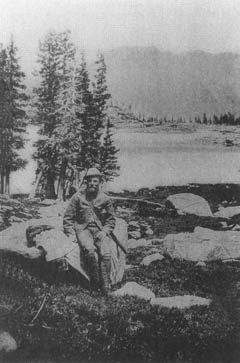 Clarence King, the first head of the U.S. Geological Survey, established in 1879

rock following the terminology established by James Dwight Dana in his influential Manual of Geology (1863).

Powell and Geomorphology. During the 1870s Powell established his own survey in the Colorado River basin. His brand of earth science was quite different from that of his predecessors. While King and Hayden had been classical stratigraphers, Powell and his staff were more interested in geomorphology, that is, the historical processes that had created the major topographical features of the region. Thus one of Powell's principal interests was in the force of erosion that had carved out the canyons of the West. In 1875 Powell hired Grove Karl Gilbert to study the Henry Mountains in Utah. Gilbert's 1877 report includes an important chapter on the principles of earth sculpture by water and rain. In addition to climate Gilbert found two other conditions that influence the way water erodes rock. According to the law of structure, soft rock washes away faster than hard rock, which remains in prominent formations. The law of declivities, Gilbert's most important contribution to modern geology, deals with the slopes of drainage lines: the closer a slope lies to the divide between two watersheds the steeper it will be; and conversely, the farther it is from the divide the gentler it will be.

Establishment of the U.S. Geological Survey. The U.S. Army also mapped the West during the 1870s, mainly to supply its need for accurate maps in waging Indian campaigns. Hayden and Powell opposed the army mapping projects because of inevitable duplication of efforts and because a new generation of American scientists did not want to serve under army officers who had no scientific education. Powell also felt that maps drawn by civilian scientists would display both the topographical features that the army needed as well as scientifically interesting geological features. Finally the National Academy of Sciences recommended that a U.S. Geological Survey be established within the Interior Department to provide economically useful data, a strategy designed to appeal to western congressmen, while the Coast Survey would remain in charge of geodesy and topography. As a result, the Geological Survey, with King as director, was established in 1879.

Powell's Leadership. From his earlier studies of the West, Powell came to believe that the laws regulating the settlement of the arid regions of the West were environmentally destructive. He opposed the provision in the Homestead Act (1862) of 160 acres per settler, favoring grants of smaller parcels that could be irrigated. Western grazing interests defeated Powell's attempts to convince Congress to act on his suggestions. When King resigned as director of the Geological Survey in 1881, Powell became director. In 1884, when Congress investigated the federal government's role in scientific research, Powell responded to representatives who wanted to restrict the scientific activity of government bureaus to applied problems and described what these agencies had accomplished:

The scientific works prosecuted under the General Government of the United States, and in like manner prosecuted by other nations, may broadly but with sufficient accuracy be classed under two heads: In the first class are constructive works, such as the erection of public buildings, the improvement of rivers and harbors, and the construction of light-houses. In all of the operations of this class, in order that the work may be properly executed, scientific principles and methods must be observed: but such works chiefly involve problems of applied science. The second class of operations in which the government of the United States, like all other civilized nations, is engaged, involve in their nature original investigation. They are designed in large part to furnish needed information to the people, and they involve not only questions of applied science, but, that the purpose for which they are prosecuted may be properly accomplished, new facts and principles must be discovered. Such an institution is the Geological Survey, the Coast and Geodetic Survey, the Signal Service or Meteorological Bureau, the Fish Commission, the National Museum, the Hydrographic Bureau, and the National Observatory. The functions of such bureaus cannot properly 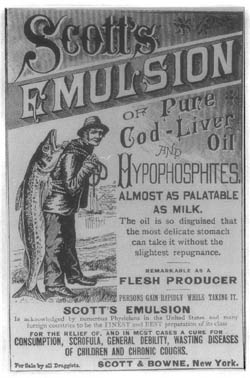 A patent-medicine advertisement from the 1890s

be performed without scientific research, and their value depends upon the wisdom and efficiency of the methods of investigation pursued.

Powell knew that advances in science were frequently made unexpectedly, and therefore he argued against strict legislative control of scientific research programs. In this instance Congress heeded Powell's advice.

Western Irrigation Studies. In 1888–1894 some western senators—spurred to rethink Powell's recommendations regarding irrigation by a severe western drought that lasted from 1886 until 1897—let him conduct an irrigation survey of the West. Powell called for long-term planning, including the resolution of federal versus state jurisdiction over large rivers and a rational program of building dams for irrigation and flood control. Congress, however, looked to short-term gain and refused to fund the programs necessary to implement Powell's plans. This difference of opinion led to another struggle and ultimately to Powell's resignation from the Geological Survey in 1892.

William H. Goetzmann, Exploration and Empire: The Explorer and the Scientist in the Winning of the American West (New York: Knopf, 1966);

Wallace Stegner, Beyond the Hundredth Meridian: John Wesley Powell and the Opening of the West (Boston: Houghton Mifflin, 1954).