The flawless voice and delivery of singer Ella Fitzgerald is woven tightly into the tapestry of American popular music. Her place in the canon of jazz artists was ensured early in her career, while she reached a wider audience throughout the world with her renditions of those enduring songs that have come to be known as standards. Her name is almost synonymous with the compositions of Irving Berlin, George Gershwin, Rodgers and Hart, and Cole Porter, as well as the music of Duke Ellington. Her interpretation of their music is forever enshrined in her famous “songbook” series of albums, in which she uniquely included the verses to the songs. Billed as “The First Lady of Song,” she commanded sellout attendance at concerts at home and abroad, touring extensively from the mid-1940s onward, but her unique integrity to the music and the high standards she set never wavered in the face of her immense popularity.

Born in Newport News, Virginia, and raised in Yonkers, New York, Fitzgerald was discovered at the age of sixteen while singing in a talent contest at the Apollo Theater in Harlem. She joined the Chick Webb band in 1935 and became the idol of Harlem's Savoy Ballroom. She was featured on most of Webb's recordings, and Decca was committed to pushing her recording career, which began with “Love and Kisses” in 1935. She had her first hit with the humorous and perkily tuneful ditty “A-Tisket, A-Tasket” in 1938, which propelled her to the top of the charts. In the course of her subsequent recording career, she made more than 250 albums and won thirteen Grammy Awards. 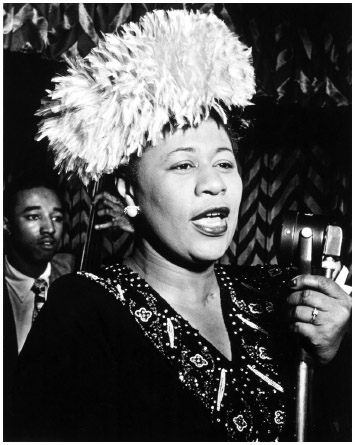 Ella Fitzgerald in the 1940s. Over the course of her fifty-nine-year recording career, Ella Fitzgerald won thirteen Grammy Awards and was presented with the National Medal of Arts and the Presidential Medal of Freedom. WILLIAM GOTTLIEB/REDFERNS/GETTY IMAGES.
Page 326  |  Top of Article

Fitzgerald inherited Webb's band after his death in 1939 and muddled along until Norman Granz, later her manager (and instigator of her “songbook” albums), began to feature her in his Jazz at the Philharmonic Concerts. Mingling with great jazz musicians at a time when jazz drew enormous audiences and dominated the popular music scene gave her the exposure and education that allowed her to move to the front rank of vocalists.

ADMIRED BY HER PEERS

Fitzgerald was blessed with a crystal clear voice and perfect pitch. Indeed, the Memorex Corporation capitalized on her ability to break glass in their famous commercials that asked whether it was Fitzgerald or Memorex tape. Her tone was generally bright and cheerful, and some critics caviled that her sense of fun got in the way of her overall art, depriving her of emotional depth. In fact, her technique enabled her to do anything she desired with a song, and she loved what has come to be termed the Great American Songbook (that is, songs by Berlin, Porter, et al.). Her clarity of diction was the admiration of her peers, including her male counterpart of perfection, Frank Sinatra, and her live performances were suffused with warmth and a quality of youthful vulnerability that she never lost.

Fitzgerald is often bracketed with Billie Holiday, her contemporary, as among the greatest of jazz vocalists, but although she could, and did, swing and scat with the best of them, her repertoire was not jazz dominated. Holiday is generally defined as the more emotional and sensual of the two, implying her greater depth and sophistication, whereas Fitzgerald is considered to have greater simplicity and directness. Her dexterity was considered equal to that of the best horn players, and Bing Crosby was not alone in saying she had “the best ear of any singer ever” and called her “the greatest.”

Speaking of Fitzgerald's skill, Ellington noted that “her artistry brings to mind the words of the maestro, Mr. Toscanini, who said concerning singers, ‘Either you're a good musician or you're not.’ In terms of musicianship, Ella Fitzgerald was beyond category.” Mel Torme marveled that “anyone who attempts to sing extemporaneously—that is, scat—will tell you that the hardest aspect is to stay in tune. You are wandering all over the scales, the notes coming out of your mouth a millisecond after you think of them. … Her notes float out in perfect pitch, effortlessly and, most important of all, swinging.”

Her live recordings demonstrate the musical affection she and her audience shared. On Ella in Berlin, for example, she forgets the words to her version of “Mack the Knife,” but she keeps going, making it up as she playfully teases herself. The audience loved it. This moment would probably have been cut out of a studio recording. Fitzgerald enjoyed touring and continued to do so for most of her life until ill health prohibited it. She generally appeared with a trio but was also frequently found at festivals where she would join groups of varying sizes. Fortunately, many of these live performances, in which she was in great form, were recorded.

Fitzgerald loved Louis Armstrong, and the three albums and many radio checks she made with him can be placed with her best work. The respect and affection these artists had for each other shines through their recordings, and their Porgy and Bess album remains essential to any jazz collection.

A favorite guest artist on television programs—Dinah Shore and Crosby featured her often—Fitzgerald was in particularly good form on the Swing into Spring programs of 1958 and 1959 and in a program produced by Norman Granz on PBS in November 1979, which featured Count Basie and his Orchestra, Roy Eldridge, Zoot Sims, Joe Pass, and many other leading jazz artists. She also made a number of cameo appearances in movies and was featured more substantially in Pete Kelly's Blues (1955) and St. Louis Blues (1958).

Fitzgerald came of age in a period that respected elegance and artistry. She continued to hone her craft throughout her long career, and her fans instinctively appreciated her note-perfect musicianship and precise technique that was so admired by the cognoscenti. Her long career saw her singing in numerous and varied settings and winning fans across several generations. She rose from simple origins to become a goodwill ambassador for the United States.

In 1947 Fitzgerald married bass player Ray Brown and the couple adopted a son, Ray Brown Jr., before divorcing in 1953. She suffered some eye trouble in the 1970s but continued to perform happily at concerts and festivals until the late 1980s, when she grew debilitated as a consequence of the diabetes from which she had suffered for a number of years. She continued to perform, even after both her legs were amputated below the knee in 1987, until she retired a few years before her death in 1996 the age of seventy-nine.