The Sacco and Vanzetti Case

THE SACCO AND VANZETTI CASE

On 15 April 1920 in South Brain-tree, Massachusetts, Frederick Parmenter, the paymaster of the Slater-Merrill Shoe Company, was about to enter the factory grounds with two metal boxes containing slightly more than $15,000 in cash when he and a security guard were accosted by two armed robbers. After fatally wounding Parmenter and his companion, the bandits seized the payroll boxes and were seen driving away with a third man in a Buick touring car. Onlookers described the gunmen as "short, dark, foreign types." The getaway vehicle was later found in the nearby town of Brockton. 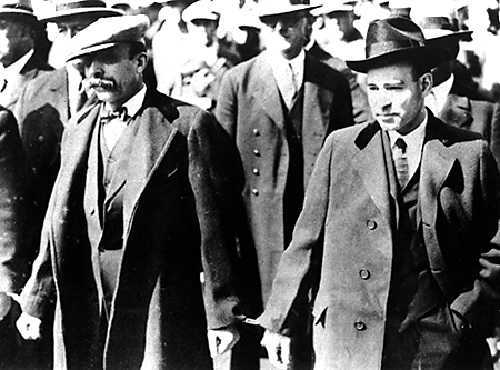 The end of the longest journalistic death watch during the 1920s Archive Photos, Inc. Reproduced by permission.

The next month state police officers raided a private dwelling in Staughton, Massachusetts, that was suspected of being a "safe house" for fugitive political terrorists. Among those taken into custody were Nicola Sacco and Bartolomeo Vanzetti, two Italian immigrants. Both men were outspoken advocates of anarchism and union organizers who worked among laborers in local textile mills.

Sacco was found to be in possession of a .32-caliber Colt automatic pistol similar to a weapon used in the South Braintree robbery. Ballistics experts later claimed that the bullets found in this gun matched those extracted from the victims' bodies. It was suspected Sacco and Vanzetti had staged the heist to secure funds for their cause. Several onlookers firmly identified the two anarchists as the murderers, and other witnesses came forward to state that on several occasions they had seen Vanzetti at the wheel of the hold-up car.

While much of the evidence was circumstantial, the two men were indicted for armed robbery and murder. They were finally brought to trial in Dedham County Court on 31 May 1921, and six weeks later the jury declared the defendants guilty on all charges. The trial judge, Webster Thayer, sentenced both men to death by electrocution.

In February 1925, while visiting in the Soviet Union, two leading American Communists, William Z. Foster and James P. Cannon, analyzed the Sacco and Vanzetti case. They agreed on the need for an organization in the United States that could organize and fund public defense campaigns for similar "political prisoners." Moreover, such an entity could help to "educate" American workers about the class nature of "capitalist justice."

On 28 June 1925 more than 150 political activists assembled at the Ashland Auditorium in Chicago to organize the International Labor Defense Fund (ILDF). Representatives of various leftist political views were at this meeting, but the majority of those in attendance were Communists, and from the start the ILDF was viewed as a Communist front group.

The delegates agreed to defend all "victims of American ruling class terror" regardless of "color, creed, nationality, or political belief." Besides providing free legal counsel to various prisoners the ILDF pledged to provide them with monthly financial support. It was estimated that in 1925 approximately 128 such individuals in the United States were either awaiting trial or serving extended jail terms. Chronic political factionalism undermined the work of the ILDF almost from the beginning. While it lasted until the 1940s the ILDF achieved few notable victories against "class oppressors."

A Political Cause Célèbre

Initially the condemned men had few defenders outside radical political circles. Their extreme views and heavy accents appeared to confirm every stereotype about "Italian wild men." Through a series of deft maneuvers during the appeal process, their lawyers, led by William Thompson, delayed the executions for several years. During this interlude many Americans, especially liberals and intellectuals, had reassessed the case and decided that the arrest and conviction of the two anarchists was really a "political prosecution." By late 1925 a national Sacco and Vanzetti defense committee had been organized and sponsored a series of mass demonstrations in major American cities. By 1926 the defense team had enlisted valuable assistance from Michael A. Musmanno, a young labor attorney from Pittsburgh, Pennsylvania, who believed that evidence had been fabricated and that Sacco and Vanzetti had been condemned to death for their political beliefs.

Such intense public pressure finally induced Gov. Alvan T. Fuller of Massachusetts to convene a special three-member commission, headed by President A. Lawrence Lowell of Harvard University, to review the entire case. In June 1927 the Lowell Commission upheld the validity of the original verdict and advised Fuller not to grant clemency. While critics denounced these findings as an "official white-wash," Massachusetts officials planned to proceed with the executions that August in Charlestown State Penitentiary.

Defense attorneys, most notably Musmanno, made an effort to secure last-minute stays of execution from the U.S. Supreme Court. But despite the great public outcry, that tribunal declined to intervene. Musmanno had been especially hopeful that Supreme Court Associate Justice Oliver Wendell Holmes Jr. would be sympathetic to his cause, but on 21 August 1927 Holmes refused to stay the executions. He later told liberal friends that he did not have the constitutional authority to intervene in a state criminal case. Moreover, he believed that Sacco and Vanzetti were guilty. On 23 August 1927 Sacco and Vanzetti calmly went to their deaths. Considerable controversy has remained over whether either man was guilty as charged.

The Sacco and Vanzetti Case