Cuban communist revolutionary guerrilla fighter and leader of Cuba since January 1959. Fidel Alejandro Castro Ruz was born on 13 August 1926 in the municipality of Mayarí (Oriente Province). His father was a wealthy sugarcane planter of Spanish origin. Castro studied at the University of Havana, earning a law degree in 1950. Here his political formation began in the action-oriented and often violent student politics of the period. As part of the wave of disaffection with government corruption, he joined the new Ortodoxo (Orthodox) Party led by Eduardo Chibás and in 1947 participated in actions to overthrow Dominican Republic dictator Rafael Trujillo. In 1948 Castro attended a student congress in Bogotá, Colombia, where major disturbances broke out after the assassination of the popular radical politician Jorge Gaitán.

After the 1952 Cuban military coup carried out by Fulgencio Batista, Castro and his Orthodox Party allies initiated a campaign of resistance against the newly installed dictatorship. On 26 July 1953, the youthful rebels attacked the Moncada military barracks in Santiago de Cuba, the country's second-largest city. The assault failed, and Castro was ultimately imprisoned on the island of Pines. His defense speech at his trial, titled “History Will Absolve Me,” was a powerful denunciation of social and economic injustice that would subsequently serve as a rallying cry in his struggle against the Batista regime.

In 1955 Castro was released from prison as part of a general amnesty and took refuge in Mexico. There he and his comrades, who would eventually establish the July 26 Movement, connected with Argentinean physician and revolutionary Ernesto “Che” Guevara. In December 1956 Castro, Guevara, and their followers sailed from Mexico on board the yacht Granma and landed in southeastern Cuba. This marked the beginning of a two-year military and political campaign to overthrow the U.S.-supported Batista regime. In the last days of 1958 Batista fled the island, and Castro entered Havana in triumph in January 1959.

His defense speech at his trial, titled “History Will Absolve Me,” would subsequently serve as a rallying cry in his struggle against the Batista regime.

From that point on, Castro steadily increased his influence. In February 1959 he made himself premier. Increasingly, he based his regime on anti-Americanism. During 1959-1962 he moved Cuba radically to the Left. Two agrarian reforms—confrontation with the United States over American investments in Cuba and U.S. support for counterrevolutionary movements culminating in the 1961 Bay of Pigs invasion—led to a break in diplomatic relations with the United States. In December 1961 Castro declared that he was a Marxist-Leninist. Economic, political, and military ties with the Soviet Union strengthened steadily throughout the 1960s.

Settlement of the October 1962 Cuban Missile Crisis led to Cuban anger over what was seen as a Soviet betrayal of Cuban interests. It initiated a Page 380  |  Top of Articlecomplex period in Cuban-Soviet relations characterized by Castro's suspicion of the Soviet Union's motives tempered by a growing reliance on Soviet economic assistance. While Cuba became a member of Comecon and received important Soviet military aid in the 1960s, Castro's foreign policy, especially in Latin America, embraced the strategy of armed revolution conducted by guerrilla movements in Guatemala, Venezuela, Peru, and Bolivia. This challenged Soviet support for policies of peaceful coexistence with the West. 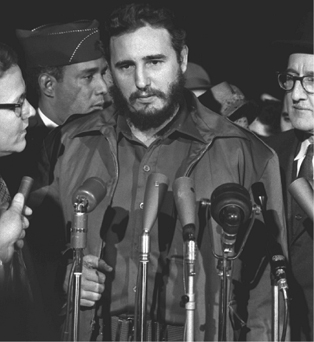 By the end of the 1960s the failure of the first wave of Castro-inspired guerrilla wars and the collapse of his ambitious plans to industrialize Cuba and produce a record 10 million-ton sugar crop in 1970 led to an accommodation with Soviet economic and strategic goals in the 1970s. Steady economic growth and institutionalization weakened Cuba's commitment to continental and even worldwide revolution. However, adjustment to Soviet economic orthodoxy did not completely erode Castro's commitment to support of socialist liberation movements.

In Bolivia during 1967-1968 with support for Guevara's revolutionary expedition and then in the 1980s in Grenada, El Salvador, and Nicaragua, Castro assisted revolutionary movements and left-wing governments. He began sending Cuban military forces to Angola in November 1975, which helped to turn the tide there against South Africa's attempt to defeat the left-wing Movimento Popular da Libertação de Angola (MPLA, Popular Movement for the Liberation of Angola) in Angola. Some see the Cuban victory in the 1988 Battle of Cuito Carnavale as the beginning of the end of the apartheid regime.

The renewed Cold War of the 1980s ended with the defeat of the Cuban-supported Sandinista government in Nicaragua and the negotiation of an end to the civil war in El Salvador, which pitted Cuban-supported Farabundo Martí National Liberation Front (FLMN) forces against a series of U.S.-supported governments. The collapse of communism in Eastern Europe and the dissolution of the Soviet Union itself in 1991 were serious setbacks for Castro both economically, with a sharp falloff in Soviet aid, and diplomatically. In the 1990s Castro announced the launching of “The Special Period in Times of Peace,” which inaugurated a shift away from Soviet-style economic institutions toward a limited tolerance for private economic enterprises. It also embraced tourism and encouraged investments from Europe, Asia, Canada, and Latin America.

The end of the Cold War did not, as most observers anticipated, bring about the demise of Castro's regime. In spite of his adoption of many Soviet models, the indigenous, nationalist roots of Cuba's noncapitalist path since 1959 continued to confound predictions.