Political movement launched in the People's Republic of China (PRC) by Chinese leader Mao Zedong during 1966-1969, although its influence was felt into the mid-1970s. Mao termed the Cultural Revolution (CR) his “lifetime achievement” apart from leading the successful 1949 revolution. Some have compared its significance to the 1917 Bolshevik Revolution in Russia, but it has also been seen as a clash of personalities, ideologies, and policies between Mao and President Liu Shaoqi, the second most powerful figure in the PRC. Mao sought to use the CR to enhance his authority. High-ranking CR proponents included Mao, Premier Zhou Enlai, Foreign Minister Chen Yi, and Defense Minister Lin Biao. On the other hand, the so-called capitalists who opposed the CR dominated the Chinese Communist Party's (CCP) Politburo, Central Committee, regional bureaus, and provincial party committees, including the crucial Beijing unit. They included Liu, General Secretary of the CCP Deng Xiaoping, Beijing Mayor Peng Zhen, chief of the People's Liberation Army (PLA) General Staff Luo Ruiqing, and Marshal He Long.

These groups differed over the handling of contradictions inside and outside the CCP in regard to society, culture, and the economy. Among the contentious issues was whether the CCP should be revived with new socialist ideals or maintained predominantly as a bureaucratic entity. The two sides also clashed on the collectivization of agriculture, moral/material incentives, and self-reliance versus free markets. The rift also pitted the Maoist mass line model advocating a continuing class struggle against those capitalists who advocated economic development and modernization as a means to achieve superpower status.

External factors also drove the CR, including the Sino-Soviet split, the Soviet Union's revisionism peaceful coexistence with the West, and antipathy toward supporting developing nations. Liu was labeled a “Chinese Khrushchev” during the CR, in reference to Soviet leader Nikita Khrushchev's reforms of the 1950s.

The sixteen-point guidelines issued on 8 August 1966 initiated the CR, although the more immediate catalyst was Beijing Vice-Mayor Wu Han's play Hai Rui's Dismissal from Office, an allegory about a Ming Dynasty official's vindication after being forced from his post. The play indirectly referred to former Defense Minister Peng Dehuai's 1959 removal from office following the Lushan Conference, when Peng criticized Mao for the disastrous Great Leap Forward. Radicals within the Politburo, including the Gang of Four clique comprising Mao's wife Jiang Qing and Shanghai-based Communist Party members Wang Hongwen, Zhang Chunqiao, and Yao Wenyuan, responded in late 1965 with countercritiques, one by Yao to the Shanghai newspapers and a literary critique from Jiang, that rallied the opponents of Peng.

Once Mao in August and September 1966 accorded legitimacy to the CR through the medium of the big-character poster, the movement spread across the PRC. Soon, a three-in-one system was formed, comprised of the military, revolutionary cadres, and representatives of the masses. In March 1967, they were tasked with carrying forward the revolution. The CCP's Central 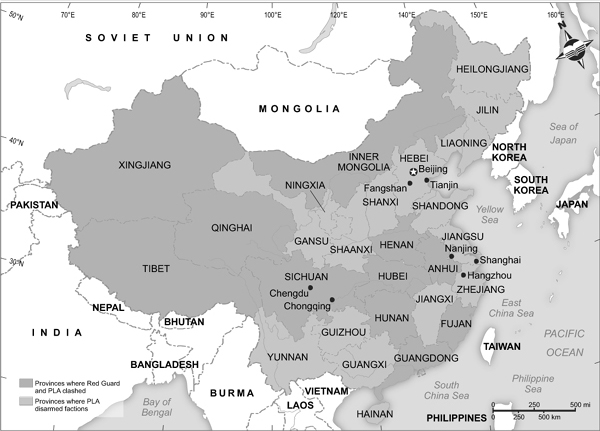 Committee thereby lost its influence to the Central Cultural Revolution Small Group—radicals loyal to Mao. The so-called Red Guards, tasked with replacing “old world with new world,” were one of the main proselytizers of the CR movement.

Beginning in August 1966, the Red Guards carried out actions against the Four Olds: old ideas, old culture, old customs, and old habits. In the process, they condemned, humiliated, and often brutalized or killed Communist Party cadres and corrupt revisionist authorities accused of taking the capitalist road and criticized petit bourgeois teachers. PRC military and security forces were ordered to support the revolutionary masses of the Left and, in the latter phases of the CR, to restore order in the chaotic society and economy. In January 1967, Mao pressed the PLA to restore order in the country, and by April 1969 the CCP's Ninth Congress declared the CR at an end.

The effects of the CR were numerous. Liu, in ailing health, was imprisoned and denied medical treatment. He died in prison of diabetes in 1969. Peng, Luo, and others were purged. Many students were sent to rural outposts to learn from peasants in 1968. Thousands of households considered bourgeois were ransacked and their occupants killed. Priceless cultural artifacts, regarded as feudal or capitalist anachronisms, were smashed or otherwise destroyed. Over the long term, the CR also led to the erosion of the CCP's political authority. The CCP's 27 June 1981 Resolutions on Questions of Party History stated that the CR imposed a “severe setback and the heaviest losses suffered by the party, state, and the people” since 1949.