The Great Migration was a massive population shift that occurred in the United States between 1910 and 1970, when nearly 8 million African Americans left rural communities of the South seeking greater economic opportunity and racial tolerance in cities of the Northeast, Midwest, and eventually the West Coast. In 1914, 90 percent of African Americans lived in the states of the former Confederacy. By 1970 more than 50 percent of blacks lived outside the South. Scholars continue to study the so-called “push” and “pull” factors that caused this migration, as well as the dramatic economic, social, and cultural changes that resulted from it.

After the Civil War (1861–65) and through the end of the nineteenth century, most blacks remained in the South, where their ancestors had worked the land as slaves. Maintaining the communities in which they had been raised, they lived primarily in rural areas and worked in agricultural jobs. Even as free citizens, however, Southern blacks had little or no opportunity to own land or build financial independence. Generally limited to sharecropping, they remained dependent for their livelihoods on the landowners (previously slave-holders), who loaned the seed and capital (such as livestock and plows) needed to grow the crops, controlled the sale of the harvest, and kept the financial records. Moreover, whereas cotton growing had been lucrative on the large-scale model of a 500- to 1,000-acre plantation, it was extremely difficult to turn a profit on a sharecropper's tract of 40 to 50 acres. Under these circumstances, the average sharecropper struggled continually to pay his debt to the landowner and was rarely able to save enough money to buy his own tools or advance in other ways.

The severe limitation of the Southern agricultural livelihood is described as a “push” factor for migration—that is, one that eventually drove blacks out of the South. The prospect of earning higher factory wages in the industrialized cities of the North is described as a “pull” factor—one so attractive that African Americans would risk moving to an unknown region of the country to start a new life.

Another significant “push” factor began in the late 1870s with the enactment in the South of the discriminatory statutes that later became known as Jim Crow laws. These laws mandated the physical separation of blacks and whites in all public places, including buses and railway cars, restaurants and theaters, and hospitals and schools. Validated by a series of Supreme Court rulings during the 1890s, Jim Crow policy was ultimately cemented by the landmark Plessy v. Ferguson ruling of 1896, which enshrined the doctrine of “separate but equal” in the United States. Far from providing equality, Jim Crow laws effectively consigned African Americans to the status of second-class citizens, denying their right to vote and other civil rights and curtailing their social, educational, and economic opportunities.

Despite these combined factors, African Americans did not begin leaving the South in large numbers until the second decade of the twentieth century, when World War I (1914–18) provided a critical new “pull” factor that greatly accelerated the migration of African Americans to Northern cities. Until then factory jobs in Northern cities had been largely filled by European immigrants, who had begun flooding into the United States in the 1880s, seeking prosperity in the New World. During the war years the needs of the defense industry increased demand for industrial labor,

In the early aftermath of the Civil War (1861–65) and before the Great Migration (1910–70) of Southern blacks to the North and West, the promise of economic advancement for Southern blacks was largely embodied by an emancipated slave named Booker T. Washington (1856–1915). Unlike his contemporary W. E. B. DuBois (1868–1963), who saw classical education and the growth of an elite black leadership as necessary for the political advancement of African Americans, Washington maintained that self-determination must come from economic independence, which could only be realized through the acquisition of practical skills and manual trades. Washington founded the Tuskegee Institute in Alabama to provide vocational education of this kind. As he became popular among white political leaders for his emphasis on economic opportunity over political protest, Washington was bitterly criticized by DuBois and other intellectuals as an “accommodationist” who would capitulate to the premise of white supremacy rather than fight for the equality of his race.

Booker Taliaferro Washington was born in Franklin County, Virginia, on April 5, 1856. Just nine years old when the Civil War ended, Washington struggled to gain his education while working in salt mines to help support his family. From 1872 to 1875 Washington attended the Hampton Institute, a school devoted to educating former slaves, where he was able to pay his tuition by working. Washington quickly embraced the educational philosophy of the Hampton Institute, which saw the acquisition of practical skills and manual trades as key to improving the status of African Americans. Although Washington went on to study briefly at the Wayland Seminary in Washington, D. C., he left the school, finding the purely academic and theoretical atmosphere too removed from the everyday reality that most African Americans experienced at that time.

Returning to the Hampton Institute as a teacher in 1879, Washington was soon appointed to serve as the founding principal of a new school for African Americans to be built in Tuskegee, Alabama. At the Tuskegee Normal and Industrial Institute (later renamed the Tuskegee Institute and then Tuskegee University), Washington espoused the Hampton Institute's philosophy of self-reliance, emphasizing manual and industrial education; practical trades such as carpentry, farming, mechanics, and teaching; and the value of personal discipline, cleanliness, and thrift. The Tuskegee Institute expanded, and by 1888 it covered 549 acres and enrolled more than 400 students.

In the years that followed, Washington's influence extended beyond his students in Tuskegee. In 1895, not long after the legality of Jim Crow segregation had been upheld by the Supreme Court ruling Plessy v. Ferguson, Washington addressed an all-white audience of about 2,000 people at the Cotton States and International Exposition in Atlanta, Georgia, delivering a speech that was later dubbed the “Atlanta Compromise.” Outlining his proposal for racial harmony in the United States, he explained that educational and economic self-improvement were key to dispelling African American resentment and public protest. Ultimately Washington indicated his willingness to accept racial segregation as the price of economic opportunity, declaring, “In all things that are purely social we can be as separate as the fingers, yet one as the hand in all things essential to mutual progress.”

Washington's speech was popular among white Americans, and he was touted as a model for his people. He went on to develop strong ties with Northern philanthropists such as Andrew Carnegie (1835–1919), George Eastman (1854–1932), Henry H. Rogers (1840–1909), and Julius Rosenwald (1862–1932), who appreciated Washington's entrepreneurial approach to race issues. Washington also became an advisor on racial matters to Presidents Theodore Roosevelt (in office 1901–09) and William H. Taft (in office 1909–13). Washington himself realized that economic opportunity alone was not enough to improve the conditions of African Americans. Although his public position never wavered, Washington privately supported campaigns against injustice. He anonymously financed lawsuits against disfranchisement and segregation and secretly influenced other legal actions.

Washington maintained a demanding public life until he became ill during a lecture series and died on November 14, 1915. At the time of his death, Tuskegee boasted an enrollment of 1,500 students and a larger endowment than any other black institution. Ironically, it was at this historical moment that blacks were beginning to migrate to the North in large numbers, believing that economic advancement would never be possible in the segregationist South.

Boston, Michael. The Business Strategy of Booker T. Washington: Its Development and Implementation. Gainesville: UP of Florida, 2010. Print.

Norrell, Robert J. Up from History: The Life of Booker T. Washington. Cambridge: Belknap-Harvard UP, 2009. Print. 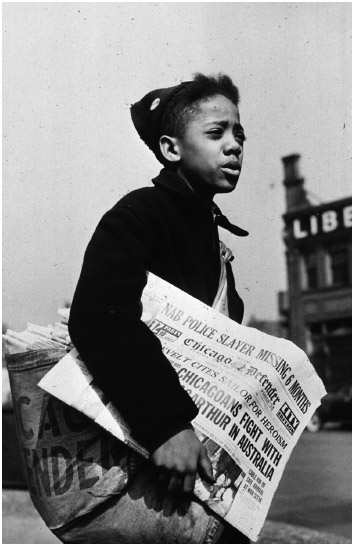 The Chicago Defender, an African-American newspaper, promoted the social and economic promise of the North, thus encouraging African Americans to migrate from the South. This photo, taken in 1942, shows a newsboy selling copies of the paper. DELANO/LIBRARY OF CONGRESS/GETTY IMAGES

while European immigration saw a marked decline, drastically reducing the competition for jobs. Meanwhile, African American newspapers, perhaps most notably the Chicago Defender, played a significant role in promoting the social and economic promise of the North to Southern blacks just as the South was experiencing devastating floods, an infestation of boll weevils that decimated the cotton crop, and other agricultural disasters. During the decade between 1910 and 1920, the African American population of the North and West grew by 450,000, principally in Chicago, New York City, Detroit, and Cleveland.

Black migration remained strong during the 1920s, when new anti-immigration legislation continued to limit competition for urban jobs, but it dwindled considerably during the 1930s, as the Northern industrial economy was hobbled by the Great Depression. Migration resurged again during World War II (1939–45), when many of the same push-pull factors (including wartime job opportunities, restricted foreign immigration, and continued racial hostilities in the South) launched a second wave of African Americans from the South, many of them relocating as far as Los Angeles, Oakland, and other West Coast cities. The black exodus from the South peaked during 1940s and 1950s, when nearly 3 million people abandoned the region.

Although segregation was not legally enforced outside the South, African Americans settling in industrial cities faced unmistakable racism nonetheless, including the threat of violence or intimidation if they sought to move into the same neighborhoods as whites. Relegated to living in densely populated all-black enclaves (commonly referred to as “ghettos”), African American migrants were initially confined to stereotypically “negro” jobs, such as cooks and porters, or worked in low-skilled industrial positions. Eventually black workers moved up the occupational ladder to hold an increasing number of skilled manufacturing jobs and clerical positions. At the same time, new African American communities formed, generating a new urban black culture and a growing inclination toward political activism. As African Americans in industrial cities began to agitate for fair wages, equal protection under the law, and the chance to vote and hold political office, the seeds of the civil rights movement (1950s and 1960s) were born.

By 1970 migratory flows between the North and South had more or less equalized. Not only had Jim Crow laws been overturned in the South but new manufacturing jobs and the spread of air conditioning were contributing to the emergence of the so-called Sunbelt (a coast-to-coast swath of 15 Southern states) as an attractive place to live and work. The Great Migration remains an important topic for economic historians because it effectively redefined the social, economic, and cultural fabric of the nation.

Hahn, Steven. A Nation under Our Feet: Black Political Struggles in the Rural South from Slavery to the Great Migration. Cambridge: Belknap-Harvard UP, 2003. Print.