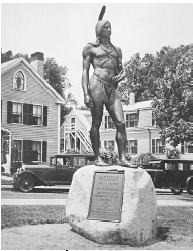 Portrait: Massasoit. Reproduced by permission of The Library of Congress.

" . . . not only the greatest King amongst them called Massasoit, but also all the Princes and people round about us, have either made suit unto us, or been glad of any occasion to make peace with us. . . . "

Massasoit was a Native American leader who worked to maintain friendly relations with English settlers in the early seventeenth century. He is also believed to have taken part in what has become known as the first Thanksgiving. While it is true that Massasoit strove for good relations with the Europeans, his story is more complicated than schoolbooks have led generations of Americans to believe. Massasoit maintained his treaty with the settlers even after a majority of Native Americans began to resist the colonists' expansion. As a result, he was criticized by other Native Americans for giving up too much in return for personal power and prestige.

From his home village of Pokanoket, near present-day Bristol, Rhode Island, Massasoit ruled the Wampanoags and a number of related tribes in southeastern New England. Little is known about Massasoit except that he was physically strong and, when conversing with the settlers, was "grave of countenance and spare of speech"—in other words, he was serious-looking and chose his words carefully. Dressed in traditional Page 200  |  Top of Article Native American attire, with his face painted red and wearing a thick necklace of white beads (the sign of authority), Massasoit was a formidable (cause of fear or dread) presence. Although he initially frightened English settlers, he gave much-needed assistance and goodwill.

In 1620 about one hundred Pilgrims (early English settlers who wished to freely practice their own form of Christianity) arrived at Plymouth, Massachusetts. When their ship, the Mayflower, sailed back to England in the winter of 1620, it left behind a group of men, women, and children unprepared to deal with life in the wild land. As they shivered in their brush huts against the New England cold, they were surrounded by a "howling wilderness," an endless forest they imagined to be full of blood-thirsty savages, wolves, and maybe even devils. The new settlers did not know how to hunt, fish, plant, or build adequate shelters. They had few supplies to carry them through to spring. Under such terrible conditions, they struggled to stay alive. One by one the settlers died of malnutrition, disease, and gnawing hunger. Only half of them survived the first winter of 1620–21, and those who remained were weakened and confused, with little hope for the future. It seemed they would soon all be gone, dying thousands of miles from home on this wild, foreign shore, their bones dragged into the forest by fierce animals.

In 1614 an English sea captain kidnapped a number of Patuxent tribesmen who lived in the area where the Plymouth (Massachusetts) colonists landed. He sold them as slaves in Spain. Through a strange turn of events, one of the Patuxent men, Squanto was brought out of slavery by monks who wanted to convert him to Christianity. He later made his way to England and from there returned to his homeland. When he arrived, however, he was horrified to find his village abandoned. Tribeless, he joined Massasoit's people, the Wampanoags. When the Pilgrims arrived, Squanto followed Samoset, another Native American leader, out of the forest to greet them—in English—and helped them survive the harsh conditions in Plymouth. Squanto's friendship helped the colonists established a friendship with the far more powerful Massasoit.

Massasoit comes to their rescue

Massasoit first appeared in the Plymouth Colony in March 1621. He followed Samoset, another Native American

[Image not available for copyright reasons]

leader, and Squanto (see entry), English-speaking Native Americans who paved the way for friendly relations with the English. When Massasoit and his sixty warriors stepped out of the wilderness and stood on a hilltop looking down on the settlement, the few surviving able-bodied colonists scrambled for their guns. But the settlers slowly realized they were not confronting enemies who wanted to kill them. Instead, the Native Americans turned out to be friendly people who gave them food in exchange for baubles (trinkets) and, moreover, helped protect them against marauding (roaming and raiding) Native American tribes. Massasoit seemed to be a blessing from Heaven. Squanto led the Native Americans in teaching the Pilgrims how to plant crops. After a bountiful harvest in the fall, the colonists had a feast of celebration to which they invited Massasoit and ninety of his men. Squanto was reportedly among them. This feast has come to be known as the first Thanksgiving, and Squanto in particular is associated with the event when it is commemorated each year in the United States.

When the Pilgrims arrived at Plymouth, Massachusetts in 1620, they were not prepared to face a harsh winter in a strange environment. By spring 1621 many had died. Native American chief Massasoit and other Wampanoags came to the colonists' rescue, and an English-speaking Native American called Squanto taught them how to plant crops. After a bountiful harvest in the fall, the Pilgrims held a feast of celebration, to which they invited Massasoit and ninety of his men. In a letter dated 1621 and excerpted below, Plymouth governor William Bradford (see entry) described this event, which is now known as the first Thanksgiving.

A Letter Sent from New-England to a friend in these parts . . . .

. . . . We set the last Spring some twentie Acres of Indian-Corne, and sowed some six Acres of Barley and Peas, and according to the manner of the Indian, we manured our ground with Herrings or rather Shads [a type of fish], which we have in great abundance, and take with great ease at our doors. . . . Our harvest being gotten in, our Governor [Bradford is referring to himself] sent four men on fowling [hunting for birds], that so we might after a more special manner rejoice together, after we had gathered the fruit of our labors. They four in one day killed as much fowl, as with a little help beside, served the Company almost a week, at which time amongst other Recreations, we exercised our Arms [fired their weapons], many of the Indians coming amongst us, and amongst the rest their greatest King Massasoit, with some ninety men, whom for three days we entertained and feasted, and they went out and killed five Deer, which they brought to the Plantation [settlement] and bestowed on our Governor and upon the Captain, and others. And although it be not always so plentiful, as it was at this time with us, yet by the goodness of God, we are so far from want, that we often wish you partakers of our planty [plenty]. We have found the Indians very faithful in their Covenant of Peace with us; very loving and ready to pleasure us. We often go to them, and they come to us; some of us have been fifty miles by Land in the Country with them; the occasions and Relations whereof you shall understand by our general and more full Declaration of such things as are worth the noting. Yea it hath pleased God so to possess the Indians with a fear of us, and love unto us, that not only the greatest King amongst them called Massasoit, but also all the Princes and people round about us, have either made suit unto us [appealed to us], or been glad of any occasion to make peace with us. . . .

Massasoit and the Pilgrims also signed a peace treaty, which promised that the Native Americans and the English would live in harmony and that they would defend each other from outside attacks. Massasoit honored the treaty for the next forty years. During this time, the two groups exchanged Page 203  |  Top of Article numerous friendly visits. When Massasoit became ill, for instance, Plymouth colonists went to Pokanoket to treat their ally (one who is associated with another as a helper). On several occasions, Massasoit or his fellow Wampanoags probably saved the colonists from slaughter by warning them of possible attacks by warring tribes.

Massasoit in a difficult situation

Massasoit would later be criticized by other Native Americans for being too friendly with English settlers. At the time, however, he was in a difficult situation. Disease had recently ravaged his people. For this reason the number of Wampanoag warriors had greatly decreased, and their enemies wanted to take advantage of this fact. To the west, across Rhode Island at Narragansett Bay, roved the powerful Narragansett tribe, eager to slaughter Massasoit and the Wampanoags. To the east, the English, whatever their troubles, were rumored to have valuable trade goods and strange, new, "fire-breathing weapons" (guns). Caught between his traditional enemies to the west and the English on the coast to the east, Massasoit may have had little choice other than to ally himself with the newcomers. After all, they might be able to help the Wampanoags defend themselves.

All relations between Europeans and Native Americans had not been so congenial (pleasant), however. European contact with Native American tribes in the New England area had been happening for decades before the colonists established the Plymouth Colony, and there were many conflicts. Kidnappings and other incidents took place when European sea captains and fishermen threatened Native American territory. The Europeans also carried diseases, among them smallpox (a disease causing skin sores), typhus (a disease transmitted by body lice that causes high fever and other symptoms), and measles (a disease that causes a red skin rash). Lacking immunity from these diseases, whole Native American villages were devas tated. Understandably, most of the Native Americans—even those who had not yet seen white men—thought of Europeans as bearers of deadly illnesses. Considering this, Massasoit's friendship was the exception to the general rule.

Despite earnest efforts at goodwill, such as Massasoit's, the situation between the Wampanoags and their enemies was bound to get worse. New colonists starting other settlements cared nothing about honoring old agreements, such as the peace treaty between Massasoit and the Plymouth colonists. Having lived with little or no land of their own in Europe, these new colonists had not pulled up stakes and risked the dangerous, months-long voyage to be restrained upon their arrival. What they wanted was land of their own, and the land in the New World seemed theirs for the taking. All that stood in their way were the Native peoples, who fought back against the increasing invasion of the European settlers. Despite resistance from Native Americans, however, Europeans continued to expand into their territory.

In spite of these developments, Massasoit kept pressing for good relations with the Europeans. In his negotiations, he often valued the rights of the settlers over those of his own people. As a result, he weakened the Wampanoags in return for trade goods, personal fame, and security against his enemy, the Narragansetts. Critics claimed that while these things may have seemed necessary to Massasoit, they were hardly worth the price he paid for them.

Massasoit took an unpopular position by linking his fortunes to the English. As pressures against the Native Americans mounted, many of them decided to unite and either drive out the invaders or die in the attempt. Toward the end of his life, Massasoit, too, began to deeply resent the encroachment of the English settlers. Fourteen years after Massasoit's death, his son Metacom (also known as King Philip; see entry), initiated Metacom's War (also called King Philip's War; 1675–76) to win back the land his father had given away. Eventually involving several tribes and all the New England colonies, Metacom's War was the bloodiest conflict between Native Americans and colonists in the history of New England.