Co-heads of Research in Motion 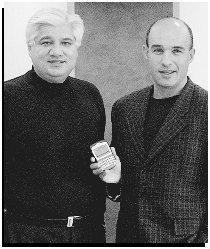 As the heads of Research in Motion (RIM), Jim Balsillie and Mike Lazaridis are best known for bringing the innovative BlackBerry wireless device to the market. Balsillie serves as RIM's chairman and co-chief executive officer, primarily handling the business side of the company. Lazaridis, the founder of RIM, focuses on product development and research and development, and is the company's visionary. Though RIM faced some difficult legal challenges regarding patents and the BlackBerry Page 23  |  Top of Article in the United States, the success of that device made them both extremely rich and their company quite successful. The pair used their wealth for philanthropic endeavors in their native Canada.

Lazaridis was born in 1960 in Istanbul, Turkey, into a Greek family. He is the son of Nick and Dorothy Lazaridis. The family left Turkey when Lazaridis was quite young. After living for a short time in West Germany, the family moved to Canada in 1966. They came on a ship to Montreal, and eventually settled in Windsor, Ontario. His father, who had worked as a clothing salesman in Turkey, found employment at a local Chrysler automotive factory. His mother worked as a seamstress.

Lazaridis was an intelligent child and greatly enjoyed school, especially reading and science. The gift of an electric train led to the growth of his interest in science and as he got older, he built rockets and radios, and did chemistry experiments. By high school, Lazaridis enjoyed both shop and academic classes. With a friend, Doug Fregin, he won the Windsor science fair. The pair created a solar-powered water heater. During the summers, he did work in his school's electronics lab, counting his teacher, John Micsinszki, as an early mentor. Micsinszki inspired Lazaridis' business, once telling his student that whoever puts together wireless and computer technology will be important.

After graduation, Lazaridis entered the University of Waterloo in Ontario, where he studied electrical engineering. He paid for his first year of school with the profits he earned from an improved buzzer system he created for his high school. Though Lazaridis took school seriously, he left a month before graduation in 1984. He had a contract with General Motors (GM) lined up that was worth $600, 000, and could not go to school and complete the project at the same time. His parents gave him the money to start a company so he could fulfill the contract. With his childhood friend Fregin, Lazaridis founded RIM. The pair completed the project for GM, which involved creating a display system for LED signs at General Motors factories which could scroll messages.

In 1987, RIM landed a contract that changed the course of their company. Rogers Cantel Mobile Communications hired RIM to look at the possibilities of wireless digital networks. This contract led to the company designing wireless local area networks. By the early 1990s, Lazaridis realized that he needed to find someone to handle the business side of RIM because he knew engineering was his specialty. That is when Jim Balsillie stepped in to run RIM.

Balsillie was born in 1961 in Seaforth, Ontario, Canada, the son of Raymond and Laurel Balsillie. His father worked as an electronics technician for Ontario Hydro. From an early age, Balsillie was interested in business as well as athletics. By the time he was a teenager, he held numerous summer jobs such as camp manager, trailer park maintenance man, and manager of a painting company which hired students. During winters, he worked at a ski hill. He also held a number of paper routes.

Scholarships allowed Balsillie to enter the University of Toronto's Trinity College, where he studied commerce. He graduated in 1984, and spent the next three years working at Clarkson Gordon for their Entrepreneur Services Group. Balsillie then entered Harvard's business school in 1987. While a student, he held several jobs on campus, including editor of the student handbook. Balsillie graduated in 1989 with his M.B.A., and later earned his Ph.D. from Wilfrid Laurier University.

When Balsillie completed his M.B.A., he chose to take a job at Sutherland and Schultz in Kitchener, Ontario, though he could have had a higher-paying, higher-profile job on Wall Street. Sutherland and Schultz was a small technology company that created a ground-breaking product which allowed computers to be linked. Balsillie chose to work there so he could learn everything abut running a company. He was originally named the vice president of finance, before being promoted to executive vice president and chief financial officer. Balsillie spent three years learning much about business, including how to deal with a patent suit when Sutherland and Schultz took on Rockwell International Corp.

Balsillie's job at Sutherland and Schultz ended when the company was sold and he was replaced. Balsillie had previously met Lazaridis when the latter did some contract work for Sutherland and Schultz. Balsillie joined RIM in 1992, and believed in Lazaridis' vision, even though RIM was lacking in funds. Balsillie put up much of his own money and even mortgaged his home. They first worked in a small office with just one employee, Mike Barnstijn.

At RIM, Lazaridis and Balsillie shared duties. Lazaridis focused on the creative side: research and development, product strategy, and manufacturing. Balsillie focused on finance, the development of the business, and the strategy of the company. As Balsillie told Erin Anderssen of the Globe and the Mail, "My job is to get the money. Mike's job is to spend it."

By the early 1990s, Lazaridis was already working on his idea to bring together the technology of pagers and computers to make a device for exchanging Page 24  |  Top of Article e-mails over a wireless network. He decided to use Internet standards, which later helped with his device's popularity. He also developed other wireless products like interactive pagers, wireless modems for laptop computers, and wireless terminals for credit card and debit card purchases.

Lazaridis also created other significant devices for RIM's clients. In the early 1990s, under a contract RIM won from the National Film Board of Canada, he worked on technology that proved to be important in film, the DigiSync Film KeyKode reader. This piece of equipment automated the process of putting together film negatives. Bar codes were printed on the film's edges, and Lazaridis' product was a high speed bar code reader. The device cut down dramatically on the time it took for a film editor to do the work, and became used on a widespread basis in the film industry. His creation of the DigiSync Film KeyKode reader earned Lazaridis an Emmy Award and an Academy Award. Though not a particularly financially lucrative invention, the reader brought prestige to RIM and put the company in the news.

By 1996, Lazaridis had created a predecessor to the BlackBerry, the rather large Interactive Pager. A year later, the same year that RIM went public, he put down the idea for the BlackBerry itself. One night, working in his basement, Lazaridis typed up a "white paper" (a document espousing the benefits of particular technologies and products) entitled "Success Lies in Paradox" and e-mailed it to his office. In the paper, he explored the idea that a small keyboard could be just as efficient as a large one. He saw that thumbs could be used to type on a tiny keyboard. Lazaridis then created a handheld device which could produce and send e-mail simply on a small keyboard and securely over a wireless network. The device would always been on. It also had an address book, memo pad, and calculator. Originally, the BlackBerry was used by RIM's employees as the company's engineers figured out how to keep the amount of power the device needed on the small side while ensuring a large capacity.

The original BlackBerry was launched in 1999, and was an instant hit with corporations who could now reach their employees anywhere. Stockbrokers and celebrities were early fans of the device. Lazaridis and RIM continued to improve the BlackBerry over the years. By 2001, it could also be used as a cellular telephone and had voice capabilities. A year later, the BlackBerry had hands-free capabilities as well. Such improvements only added to its popularity. RIM sold BlackBerries to corporate clients and often created custom packages for software, servers, and airtime. Within a few years, BlackBerries were being used in many countries around the world.

The success of the BlackBerry made Balsillie and Lazaridis rich men. They used their wealth for a number of philanthropic causes. Lazaridis donated at least $100 million for programs to encourage educational research in the Waterloo, Ontario, region. In 2000, he used some of the wealth he accumulated to found the Perimeter Institute for Theoretical Physics, which focused on cutting-edge scientific research in experimental physics. Lazaridis wanted to make it the largest such physics institution in the world. He loved physics and was intrigued by its possibilities. A physicist at the institute, Ray Laflamme, told Erin Anderssen of the Globe and Mail, "His curiosity is beyond bounds. He wants to know the little details of how things work and the big pictures of where things are going. And he wants to connect the dots in between."

BlackBerries continued to make both men wealthy in the early 2000s. By 2005, there were more than three million BlackBerry users and the company had a market value of $14.3 billion. Yet RIM was facing legal difficulties that had the potential to affect its long-term viability. In 2001, a lawsuit was filed in the United States, where RIM did about 70 percent of its business. RIM was sued by NTP, Inc., a patent-holding firm based in Virginia, for patent infringement. RIM lost the initial rounds in court and refused to settle with NTP for several years. By Page 25  |  Top of Article May of 2005, RIM finally agreed to pay NTP $450 million to end the legal battle. A month later, the deal fell apart and NTP threatened to enforce a court order which would shut down all BlackBerries in the United States. In March of 2006, an agreement was reached in which RIM paid NTP $612.5 million.

In addition to other potential lawsuits, RIM faced increasing competition for BlackBerries and other products they produced, but Lazaridis and Balsillie remained committed to their vision and continued innovation. Mark Guibert, the vice president of corporate marketing for Rim told McLaughlin of CRN, "Mike has a passion for excellence that is driven by a deep understanding of science and engineering and grounded by his own pragmatism. He wants RIM designing products for the real world—it can't just sound good on paper." Balsillie believed no matter what happened, RIM would keep going. He told David Paddon of the Toronto Sun, "We carry on anyway. One way or another, our services are staying running. One way or another, we're going to keep selling and growing."