About the Author: Abraham Lincoln (1809–1865) rose to prominence as an attorney and orator whose hallmark was his opposition to slavery. Lincoln helped to found the Republican Party, and in 1860 he was that party's presidential candidate. At the time, the United States was deeply divided over the issues of state's rights and slavery. When Lincoln won the presidential election, many slave-holding Southern states that believed strongly in state' rights responded by seceding from the United States to form a new country. The result was the U.S. Civil War (1861–1865). Lincoln is renowned for successfully guiding the United States to victory in that conflict, as well as the wisdom and humanity he displayed while in office. Shortly after the end of the war, Lincoln was shot by a symphatizer with the Southern cause. He died on April 15, 1865.

During the Hartford Convention in December 1814 and January 1815, the word "secession" was mentioned some forty-six years before the Civil War in the United States. Concerns over the high cost of the War of 1812 weighed heavily on the minds of New Englanders, and New England proposed secession from the Union. By convention's end the New England delegates rejected secession, but thirteen years later, in 1828, South Carolina's Senator John C. Calhoun would utter the word again in his famous arguments against the financial hardships imposed on the south with the Tariff of 1828.

The primary cause of the war was states' rights: did each state have an inherent right to set the laws and Page 108  |  Top of Article 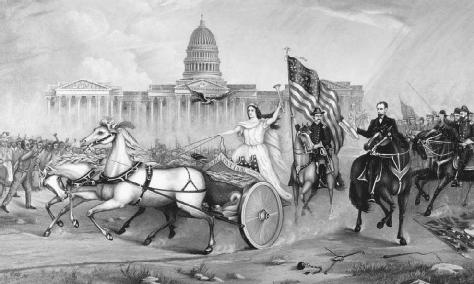 A.A. Lamb's painting "The Emancipation Proclamation" depicts President Lincoln holding the proclamation while a female figure symbolizing emancipation rides past, to the cheers of soldiers and freed slaves. © Francis G. Mayer/Corbis. Reproduced by Permission. policies that would govern the behavior of its citizens? Did federal law trump state law? Meanwhile, the continuation of the slave society of the south, where labor demands were met by ownership and use of slaves of African ancestry, generated civil rights questions for abolitionists. What rights did human beings have? Was skin color a determining factor in retaining—or removing—natural rights as human beings? Were slaves of African ancestry worth less than white owners? If the Constitution counted slaves as three-fifths of a person for House of Representatives districting, but the slaves could not vote, what roles and rights did slaves have in American government and civil society, if any? These rights issues set the stage for secession and war.

On April 12, 1861, just six weeks after President Abraham Lincoln's inauguration, the first battle of the Civil War took place at Fort Sumter; the Confederacy won. As war began, four "slave states" did not secede: Delaware, Kentucky, Maryland, and Missouri remained a part of the Union, in part because President Lincoln used a variety of legal maneuvers, including the suspension of habeus corpus, to force these border states to remain within the Union. While Lincoln had promised not to abolish slavery in slave states during his campaign for the presidency, in spite of his personal belief in freedom for slaves, his commitment to the Union was stronger than his belief in states' rights.

In 1861, Congress passed an act stating that all slaves employed against the union were to be freed, and in 1862 a similar act, freeing slaves of men who supported the Confederacy, passed Congress as well. By 1863, with strong support in the north for abolition, Lincoln wrote and published The Emancipation Proclamation.

"That on the first day of January, in the year of our Lord one thousand eight hundred and sixty-three, all persons held as slaves within any State or designated part of a Page 109  |  Top of ArticleState, the people whereof shall then be in rebellion against the United States, shall be then, thenceforward, and forever free; and the Executive Government of the United States, including the military and naval authority thereof, will recognize and maintain the freedom of such persons, and will do no act or acts to repress such persons, or any of them, in any efforts they may make for their actual freedom.

Arkansas, Texas, Louisiana, (except the Parishes of St. Bernard, Plaquemines, Jefferson, St. John, St. Charles, St. James Ascension, Assumption, Terrebonne, Lafourche, St. Mary, St. Martin, and Orleans, including the City of New Orleans) Mississippi, Alabama, Florida, Georgia, South Carolina, North Carolina, and Virginia, (except the forty-eight counties designated as West Virginia, and also the counties of Berkley, Accomac, Northampton, Elizabeth City, York, Princess Ann, and Norfolk, including the cities of Norfolk and Portsmouth[)], and which excepted parts, are for the present, left precisely as if this proclamation were not issued.

And by virtue of the power, and for the purpose aforesaid, I do order and declare that all persons held as slaves within said designated States, and parts of States, are, and henceforward shall be free; and that the Executive government of the United States, including the military and naval authorities thereof, will recognize and maintain the freedom of said persons.

And I hereby enjoin upon the people so declared to be free to abstain from all violence, unless in necessary self-defence; and I recommend to them that, in all cases when allowed, they labor faithfully for reasonable wages.

And I further declare and make known, that such persons of suitable condition, will be received into the armed service of the United States to garrison forts, positions, stations, and other places, and to man vessels of all sorts in said service.

And upon this act, sincerely believed to be an act of justice, warranted by the Constitution, upon military necessity, I invoke the considerate judgment of mankind, and the gracious favor of Almighty God.

In witness whereof, I have hereunto set my hand and caused the seal of the United States to be affixed.

Done at the City of Washington, this first day of January, in the year of our Lord one thousand eight hundred and sixty three, and of the Independence of the United States of America the eighty-seventh.

By the President: ABRAHAM LINCOLN

Misinterpretation of The Emancipation Proclamation is common; the document did not free all slaves. Only those slaves held in areas under rebellion as of January 1, 1863, were freed by Lincoln; ironically, some slaves in southern rebel areas under Union control were not free. Lincoln exempted the four border slave states, Tennessee, forty-eight counties in Virginia that later became West Virginia, and portions of New Orleans as well.

Initially, slave owners ignored the terms of The Emancipation Proclamation, and word of the declaration spread slowly among slaves. As the union army gained control over more lands, waves of slaves were freed gradually. Many detractors stated that the proclamation was too timid and applied only to those areas not under Union control in places where Lincoln had no power. As the news spread among slaves, however, abolitionists hoped that slaves would have a stake in ending the war and helping the Union to victory. By offering "that such persons of suitable condition, will be received into the armed service of the United States to garrison forts, positions, stations, and other places, and to man vessels of all sorts in said service" Lincoln issued a direct call to Page 110  |  Top of Article 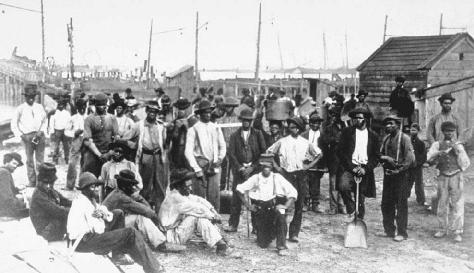 A group of African American men, former slaves freed by the Civil War and its aftermath, gather to look for work at a harbor. U.S. Signal Corps. National Archives and Records Administration action to slaves—and more than 200,000 took him up on his offer.

By war's end, four million slaves were freed, with a combined financial value of over $3 billion. Property seized by the Union when secession occurred led to massive property transfers—goods, land, farm equipment, and houses. British support for the South vanished; although the British textile industry suffered without Southern cotton, British support for abolition was stronger.

Lincoln campaigned in 1864 on the promise to push through a constitutional amendment giving slaves their freedom. Fearful of a Supreme Court reversal of the proclamation, Lincoln made plans in April 1865, as the war ended, to give former slaves the right to vote. In his last official speech before his death, President Lincoln announced on April 11, 1865, his intention to enfranchise former slaves. John Wilkes Booth, an actor, was in the audience that day; three days later he assassinated Lincoln in Ford's Theater.