The arrival of 1863 changed the legal status of people whom the U.S. government had previously labeled as contraband: subject to seizure like any other Confederate property such as horses, mules, and cows. Their long journey to freedom suffered from many fits and starts. When General John C. Frémont liberated the slaves of disloyal owners in Missouri in August 1861, Lincoln, recognizing the country was not quite ready for emancipation, ordered him to retract the order. In April 1862, slavery was abolished in Washington, DC, with money set aside to reimburse loyal owners and remove any slaves who wished to leave the United States. Finally, in September 1862, after the Union victory at Antietam, Lincoln issued the Emancipation Proclamation as a war measure to go into effect on New Years Day, 1863.

In the North and occupied regions of the South, January 1, 1863, arrived with fanfare beyond the usual New Year celebrations. Abolitionists, free blacks, and freedpeople around the country rejoiced. Slaves in Kentucky, Missouri, Maryland, Delaware, and West Virginia had to wait, for the document did not apply to them, but only covered the states in rebellion. Furthermore, it only had teeth in areas occupied by Union forces, otherwise the Confederates thumbed their noses it at. In Union occupied Hilton Head, South Carolina, thousands of freedpeople journeyed to the camp of the First South Carolina Regiment of African Descent to listen to speeches, give speeches, and otherwise have a good time.

One eyewitness said the crowd "constituted one of the most motley assemblages of which it is possible to conceive." Present, eager for a speech, and some barbecue from the ten oxen roasting over a fire, the crowd consisted of "young and old, of all shades, sizes, and costumes; ancient domestics… antiquated aunties, done up in turbans, tickled and curtseying to everyone they met; gay and gaudy yellow girls, decorated with superabundant jewelry, smiling profusely at the gay and gallant youths around them." Also present were "toothless crones, sucking on black pipes, and young mothers violently hushing their babies, while here and there gleamed the red bayonet and glowed the red breeches of a South Carolina volunteer" (New York Herald, January 7, 1863). 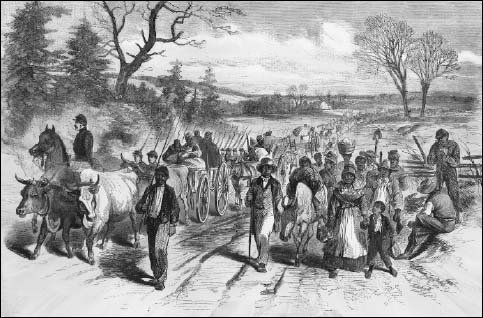 Others had to wait on the Union army to liberate them before they could celebrate, and even then concern for the future tempered some of their celebrations. Booker T. Washington, who at the close of the war lived Page 227  |  Top of Articleon a tobacco farm near Roanoke, Virginia, recalled how a Union officer rode up, read the Emancipation Proclamation, and told the assembled slaves that they were free. His mother broke into joyful tears and kissed her children, explaining to them what it meant. After a short celebration, the weight of responsibility sank in. "The great responsibility of being free, of having charge of themselves, of having to think and plan for themselves and their children, seemed to take possession of them. It was very much like suddenly turning a youth often or twelve years out into the world to provide for himself." Washington explained that to dream of freedom was one thing, but to actually have "freedom was a more serious thing than they had expected" (Washington 1901, p. 21–22).

Former slave Caroline Richardson stated that they had "been teached dat de Yankees will kill us, men women an' chillun." So, when the Union army came, "de drums wus beatin', de flags a wavin' an de hosses prancing' high. De whole hundret of us runs an' hides." They eventually came out of hiding to hear what the Union soldiers had to say. Many freedpeople left the plantation, but Caroline's family stayed on and worked for wages which was quite common at war's end (Born in Slavery, Richardson, p. 201). Mattie Gilmore recalled a similar experience in Athens, Texas, when after the announcement sunk in, her master invited her family to stay on and work for wages (Born in Slavery, Gilmore, p. 73). Some heard the news of emancipation from their masters, without ever had come into contact with Union soldiers. G. W. Pattillo a former slave who lived on a plantation near Griffin, Georgia, heard the news from his master. The master, having called the slaves together, told them that "Mr. Lincoln whipped the South and we are going back to the Union. You are as free as I am and if you want to remain here you may. I am not rich but we can work together here for both our families, sharing everything we raise equally," which Pattillo's family did for five years after the conclusion of the war (Born in Slavery, Pattillo, p. 170). William Black of Hannibal, Missouri, recalled that "when we was freed our master didn't give us nothing, but some clothes and five dollars. He told us we could stay if we wanted to, but we was so glad to be free dat we all left him. He was a good man though" (Born in Slavery, Black, p. 33).

In her interview with the Works Progress Administration writer during the 1930s, Mattie Gilmore, commented on how unprepared the freedpeople were for liberty, recalling that they "never done no managin' and didn't know how." Some, in the rush to get away from their masters, or preserve their freedom by following the Union army, did not fully understand the dangers that faced them. Along the Mississippi River they fled from plantations in the interior by the thousands, overwhelming the infrastructure of the river towns. Union Brigadier General Joseph Stockton, upon observing the cavalcade of freedpeople that followed William T. Sherman's army into Vicksburg after the raid on Meridian, felt pity for the freedpeople. He wrote that "the men were held at the Big Black River and recruited into regiments while the women and children were permitted to come into Vicksburg where they were furnished such quarters as could be found. Most of them had to take the open air for their cover and take such food as they could get. Poor things, they will die off rapidly" (Stockton Diary, March 4, 1864). Unable to feed themselves or even find shelter, they languished until the U.S. organized relief efforts and set up a bureaucracy to address their needs.

For those who remained on the plantations far removed from the Union army's line of march, and unwilling to flee, emancipation came later rather than sooner. For black in Galveston, Texas, freedom came when Union General Gordon Granger's troops landed on June 19, 1865. Today it is celebrated around the country as June-teenth. Some Confederates resisted emancipation as late as July 1865. Samuel Glyde Swain, a Union officer who served in Mississippi during the latter half of the war, wrote to his brother the summer after the war ended, remarking that "it will require the presence of troops through the country for some time yet to make the citizens through the country respect the Emancipation Proclamation." He based his opinion on the fact some Southerners were engaging in violence against freedpeople, "trying to keep up slavery by force, practicing greater cruelties upon the negroes than ever before the war" (July 26, 1865).