As a result of the American Civil War (1861–1865), which nearly halted the South's cotton exports, cotton cultivation in Egypt escalates to meet global demand.

Cambodia becomes a French protectorate in 1863. France soon establishes protectorates in several other countries in the region as well.

The Paraguayan War breaks out in 1864, with Paraguay fighting against the Triple Alliance of Argentina, Brazil, and Uruguay for control of the Río de la Plata region.

The Seven Weeks War (also called the Austro-Prussian War) between Prussia and an alliance between Austria, Saxony, and Hanover is fought in 1866 over control of several German states.

The Beirut-Damascus road, completed in 1863, opens the interior of Syria to Western travel and commerce.

The Pony Express transports and delivers mail by horseback between Missouri and California from 1860 to 1861, ending service after the completion of the transcontinental telegraph made faster communication possible.

The 1860 presidential election was highly contentious. States in the South were already threatening secession, and the vote split along partisan and regional lines. The election went to Abraham Lincoln (1809–1865), a Northerner from Illinois with abolitionist leanings; though Lincoln's famous “House Divided” speech of 1858, delivered upon his acceptance of the Illinois Republican Party's nomination to the Senate, did not explicitly condemn slavery, it clearly indicated his opposition to it. Southerners feared that, as president, Lincoln would put an end to slavery, and they began to insist on a guarantee of their right to own slaves.

In December 1860 South Carolina became the first state to secede from the Union; Mississippi, Florida, Alabama, Georgia, Louisiana, and Texas soon followed suit. In February 1861 these states formed the Confederate States of America. Virginia, North Carolina, Tennessee, and Alabama joined the Confederacy in the weeks after the start of the American Civil War (1861–1865) in April 1861. 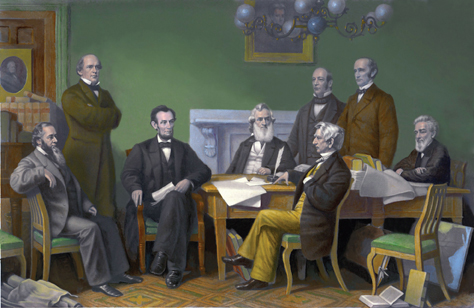 President Abraham Lincoln and his cabinet review the Emancipation Proclamation on July 22, 1862. The executive order, which declared the freedom of all slaves in the states that had seceded from the Union, was officially issued on January 1 of the following year. © EVERETT COLLECTION HISTORICAL/ALAMY

Lincoln refused to acknowledge the Confederacy as a legitimate and separate entity, declining to address official communications to its government or to remove forces from U.S. Army forts located in the Southern states. On April 12, 1861, war began when Confederate troops fired on Fort Sumter, a U.S. Army fort located on an island in the harbor of Charleston, South Carolina. This act of aggression began the longest and most deadly war in U.S. history, causing more American deaths than all the wars the United States engaged in during the subsequent 140 years.

Lincoln's aim during the Civil War was to restore the Union by forcing the Confederate states to give up their claims of independence. Initially he had not wanted to antagonize the border states that had remained in the Union, particularly the slave states of Delaware, Kentucky, Maryland, and Missouri, by abolishing slavery. As the war raged on, however, he began to believe that the only way he could save the Union was to resolve the issue of slavery permanently.

Lincoln presented the need to emancipate slaves as a military necessity. As early as May 1861, Lincoln had stood by an emerging practice of the Union army: to offer protection and employment to African Americans who had escaped enslavement and fled to the territories controlled by Union troops. The Union justified this break with the provisions of the Fugitive Slave Act (1850) on the grounds that liberating escaped slaves meant liberating contraband that would otherwise be at the disposal of the Confederate military effort. Tolerating and supporting the Southern institution of slavery no longer politically served the North, nor did it advance the cause of preserving the Union. Lincoln's counselors urged him to wait to make the proclamation until after a significant military victory for the Union so that the action would not look like an act of desperation.

Lincoln found his occasion following the Battle of Antietam on September 17, 1862, in which 22,700 men died in the bloodiest one-day battle in U.S. history. Taking place beside Antietam Creek near Sharpsburg, Maryland, the battle marked a turning point in the war as the Union forces were able to repel a Confederate attempt to invade the North. Lincoln issued what historians now call the “Preliminary Emancipation Proclamation,” warning the rebelling states that failure to surrender by the end of the year would result in his declaration of freedom for those enslaved in the Confederacy. None of the seceded states relented, and on January 1, 1863, Lincoln issued the Emancipation Proclamation, an executive order declaring that all slaves in the states that had seceded from the Union were now free.

The proclamation did not apply to the slaveowning border states that had remained loyal to the Union because Lincoln could not risk their alienation at this point in the war. Thus, slavery remained in practice in the United States, not only because it continued in the border states, but also because the Confederate states, which declared themselves distinct from the legal reach of the United States, continued to uphold slavery as an institution. Nevertheless, the Emancipation Proclamation carried great weight. In one stroke, Lincoln turned the Union's Civil War efforts into a moral imperative, giving it a powerful new force. Furthermore, though European nations such as England and France might have intervened to resolve a conflict about government on the Confederacy's behalf, they hesitated to defend slavery when it had been abolished in their own lands.

The signing of the Emancipation Proclamation was done very quietly in contrast to its open and explicit effect on the war, as well as on the lives of millions of African Americans. After a New Year's Day celebration that morning in the White House, Lincoln retreated to his study to sign the document in the presence of just a few people. He did not call a Cabinet meeting or stage a public ceremony; the announcement had, in fact, already been made in the preliminary version Lincoln had issued just after Antietam. By late afternoon, the Emancipation Proclamation had been transmitted to the press, where it went out across the country over the telegraph, appearing in newspapers that evening. Anticipation was high. Noted public figures, including the preacher Henry Ward Beecher (1813–1887) in Brooklyn and the poet Henry Wadsworth Longfellow (1807–1882) in Boston, gathered to wait for news of the proclamation's signing and to give speeches on the momentous occasion and celebrate.

Some scholars have called Lincoln's emancipation of slaves the single most influential act of any U.S. president. It granted immediate freedom to more than three million African American slaves. Although the federal government had no way to enforce the measure, thousands of slaves were set free as Union troops swept through the South. Many newly freed African Americans accepted Lincoln's call to arms. By the end of the war, almost two hundred thousand black soldiers had joined the war effort.

Perhaps more important, the Emancipation Proclamation established the abolition of slavery as a goal of the Union army in the Civil War. Neither Congress nor the Supreme Court believed it had the power to declare slavery illegal, but Lincoln assumed this power as president and commander in chief, and he came to consider doing so one of the most important accomplishments of his administration; it contributed directly to the demise of the Confederacy, and it was an important step in the national agenda toward the abolition of slavery in the United States. In 1864 Lincoln proposed that a constitutional amendment permanently abolishing slavery be included as part of the Republican Party's platform. The abolition of slavery throughout the nation was accomplished with the ratification of the Thirteenth Amendment on December 18, 1865, eight months after the end of the Civil War.

Those most directly affected by the Emancipation Proclamation, African Americans enslaved in the Confederacy in 1863, did not all learn immediately of Lincoln's declaration of their freedom and the Union's new interest in their cause. In Texas, for example, distance from the Union and the battlegrounds of the Civil War prevented the spread of this news. More than two years after the Emancipation Proclamation, on June 19, 1865, Union troops arrived in the port of Galveston, Texas, and informed enslaved people there of their freedom. They celebrated immediately. June 19 soon became a day known as Juneteenth, an annual holiday when African Americans in Texas, and later in other parts of the country, remembered and celebrated the day on which they realized the freedom promised by the Emancipation Proclamation.

Burton, Vernon. “Political Brilliance on the Path to the Emancipation Proclamation.” Lincoln Remembered. http://www.las.illinois.edu/news/lincoln/emancipation/ (accessed on May 10, 2012).