In the early 19th century, although Europeans had established settlements at several points along the African coast and North Africa was well known to them, the African interior remained largely uncharted. Yet by 1900, most of the continent had been carved up between European colonial powers, with only a few areas, such as Ethiopia, having been able to resist annexation. Anti-colonial resistance did occur, but in the end European armies always proved too strong.

In 1820, the development of quinine, an effective treatment for malaria, opened up the African interior to proper exploration for the first time. Even so, West Africa was so thoroughly unhealthy for outsiders that it was known as the “White Man’s Grave”; Mungo Park’s British-sponsored expedition there in 1805 ended in disaster when his party simply disappeared. In 1827, however, the Frenchman René-August Caillié became the first European to reach the fabled desert metropolis of Timbuktu and return alive, and by 1835, Europeans had mapped most of northwestern Africa.

An expedition in 1858 by Englishmen Richard Burton and John Hanning Speke located Lake Tanganyika and Lake Victoria, although they quarreled over which of the lakes was the source of the Nile. Speke argued (correctly) that it was Victoria, to which he alone had traveled. From the 1840s, the Scottish missionary David Livingstone managed to journey extensively in central and southern Africa. In 1853–56, he made the first known crossing of Africa from east to west, discovering the Victoria Falls on the way, before retiring to a remote station on Lake Tanganyika, where he was in turn famously “discovered” by Henry Morton Stanley in 1871.

A tropical pith helmet - worn by the Scottish missionary David Livingstone (1813–73) as he explored Africa.

By the end of the century, Europeans had charted the courses of the Nile, Niger, Congo, and Zambezi rivers, and the world was well informed of the vast resources that Africa might offer them.

THE SCRAMBLE FOR AFRICA

In 1869, the opening of the Suez Canal, linking the Mediterranean to the Red Sea and thus to Asia, focused European attention on Africa’s strategic importance. European colonial presence in Africa was still fragmented. It included Algeria, into which the French had made inroads in the 1830s; a few Spanish settlements; Portugal’s territory of Angola; and British and French trading stations in West Africa. Britain administered the Cape Colony, bordered by two Boer (Afrikaners of Dutch origin) states.

In 1884, the German chancellor Otto von Bismarck convened the Berlin Conference to settle rival claims. It was agreed that imperial powers could claim colonies only if they had agreed treaties with native chiefs and had established an administration there (the “Principle of Effectivity”). This led European countries to make effective their claims in areas they feared others might enter, setting off a “Scramble for Africa.” By the close of the century virtually all the continent was under European control.

Having made his fortune as founder of the De Beers diamond company in South Africa, British businessman Cecil Rhodes (1853–1902) turned to politics. A firm believer in British imperialism, his British South Africa Company made treaties that established a network of control throughout modern Zimbabwe. As Prime Minister of the Cape Colony from 1890, he sponsored the 1895 Jameson Raid, an attack on the independent Boer Republic of the Transvaal. However, the attack failed, ending Rhodes’ political career.

By 1914, only two areas remained free: Liberia, which had been settled by freed American slaves; and Ethiopia, which still retained its traditional rulers. 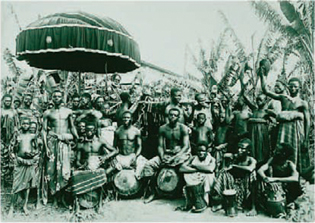 The Ashanti - were one of the few African peoples to offers strong resistance against European imperialism, but were subjugated by the British in 1900.

When France and Britain intervened in Egypt during the Napoleonic Wars (see pp. 278–9) they destabilized the Ottoman regime there, enabling Muhammad Ali—of Albanian origin—to seize power by 1807. He fought on the Ottoman sultan’s behalf against a revolt in Saudi Arabia in 1811–12, but then absorbed new territory before launching outright war on the sultan in 1832. An agreement in 1841 removed Muhammad Ali’s Syrian conquests to restore peace.

Ali reformed Egypt’s army and tried to strengthen the economy by establishing state monopolies. His successors, who took the title Khedive, continued this process, but Ismail Pasha (ruled 1863–79) overreached himself. His ambitious projects bankrupted the country, allowing the British to occupy Egypt in 1882.

The Suez Canal, - one of Ismail Pasha’s hugely ambitious projects, was opened by French Empress Eugenie in November 1868.

In 1877, the British military officer Charles George Gordon was appointed governor of the Egyptian-controlled Sudan, a post he held until 1880, when ill health forced him to retire.

Around the same time, a mystical Islamic movement arose under Muhammad Ahmad, who declared himself the Mahdi, promised savior of the Muslim world. The Mahdi’s forces annihilated a British expeditionary force under Colonel Hicks at El Obeid, central Sudan, in November 1883. Gordon was sent back to Sudan, but found himself besieged at Khartoum. After prolonged resistance, the city was stormed by Mahdists on January 26, 1885, and Gordon was killed.

Lord Charles George Gordon - faces down advancing Mahdist rebels on the steps of the British Residence at Khartoum, in 1885.

Although the Mahdi died in June 1885, his successor, the Khalifa ’Abdallahi, continued to rule Sudan until 1898, when a British force under Lord Kitchener invaded the country, bent on revenge for Gordon’s death. At Omdurman on September 1, the British, armed with the new Maxim machine gun, totally destroyed ’Abdallahi’s army and the Mahdist state collapsed.

The Dutch were the first Europeans to settle in South Africa, in 1652. From their first colony at Cape Town grew a distinctively Afrikaner, or Boer (“farmer”), society.

By 1815, however, the British had acquired possession of the Cape and, in the 1830s, the pressures of their new colonial masters led the Boers to embark on the “Great Trek” inland. A series of Boer republics grew up, including the Orange Free State and the Transvaal.

In 1877, Britain annexed the Transvaal, but the Boers declared independence again in 1880 and fought a brief and successful war to secure it. In 1895, the Jameson Raid, a botched British attempt to retake the Transvaal, led to a serious escalation in tensions and the outbreak of the Boer War in October 1899.

The Queen’s South Africa medal - was awarded to British troops for service in the Boer War.

The Boers struck first and began protracted sieges of Ladysmith, Kimberley, and Mafeking. A British counteroffensive in early 1900, after defeats at Colenso and Spion Kop in December 1899, required vast reinforcements to push the Boers back. Under serious pressure, the Boers turned to a guerrilla campaign, prolonging the war into 1902, while the British employed ruthless tactics, including the use of concentration camps. The Peace of Vereeniging ended the war in 1902, the Boer republics accepting British sovereignty in return for autonomy. 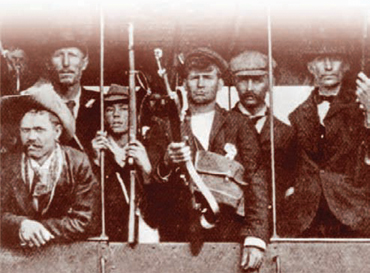 Guerrilla detachments - drawn from the Boer farming community managed to hold off the British for almost two years between 1900 and 1902.