A World Behind Bars

Americans of the 1950s did not like to dwell on one aspect of the growing crime problem: the nation's increasingly crowded prisons. By the end of the decade, the U.S. prison population—22,492 men and women in federal penitentiaries, 185,021 in state facilities—equaled the population of a city the size of Tulsa, Oklahoma. They made sure, often in violent ways, that the outside world could not ignore them. Between 1950 and 1953 people were shocked by a succession of riots in federal and state penitentiaries around the country, twenty in 1952 alone. With a few shameful exceptions, prisons in America were more humane than they had ever been. Yet convicts from New Jersey to Louisiana to California were demonstrating that some-thing was fundamentally wrong with the penitentiary system.

Were prisons intended to reform convicts, to punish them, or simply to separate them from society? This was a basic question that experts, from law-enforcement officials to social scientists, had been asking since the earliest modern prisons of the 1820s. In the 1950s it still went unanswered. Clearly convicts were not being reformed. A Nations Business magazine article from December 1954 reported that 62 percent of the convicts released from prison would be back. "There is not the slightest reason to believe that the remaining 38 [percent] have abandoned crime," the article continued. "Many of them learn enough in jail not to repeat previous mistakes in technique."

Penologists (experts on prisons) would have preferred to see convicts learning a trade. But not many facilities of the time taught job skills. Businesses in the outside world worried about competition from prisons acting as low-cost factories. Consequently, the convicts were left with either meaningless toil or languishing in their cells. The company of their fellow criminals had a much more significant influence on them than poorly planned work programs. A warden from a prison in Jefferson City, Missouri, the site of a bloody riot in 1954, was quoted in Life magazine as saying, "If we rehabilitate anybody here, it's by accident."

Nor were prisons effectively protecting society from its dangerous members. As previously mentioned, more than 60 percent of convicts were leaving to commit crimes again. The policy of indeterminate sentencing, in which the possibility of parole was offered as an incentive to good behavior, was an inexact science. The press seized on examples of dangerous criminals who had served abbreviated sentences; meanwhile, nonviolent offenders stayed behind bars. Penologists, according to Life, believed that "one quarter to one half of all the men in prison today could safely be Page 243  |  Top of Article released on parole and that their chances of going straight would in fact be improved by releasing them at the psychologically correct moment rather than keeping them confined." But there simply were not enough qualified experts to make such delicate judgments for each convict.

Whether it was intentionally the case or not, the only thing prisons seemed to do effectively was punish. Lack of privacy, one of the harsh realities of prison life, became a serious problem due to overcrowding. Cells designed to house two prisoners sometimes held three or four. Discipline suffered and violence among inmates became more common as the growing number of inmates overwhelmed prison authorities. The American Prison Association believed that no prison could be effectively run with more than twelve hundred inmates; yet, in the 1950s, facilities around the country housed two to three times as many. Life behind bars was a dehumanizing experience, certainly a punishment; but no humane person could claim that this was a productive goal in itself.

It was not impossible, however, for convicts to make positive contributions to the society that had locked them away. Some made heroic sacrifices in order to further medical research, often without any promise of reward. In February 1953 at Sing Sing prison in New York, sixty-two volunteers were injected with syphilis. During the Korean War, when the country had a vital interest in maintaining a supply of uncontaminated blood, convicts became guinea pigs in the fight against serum hepatitis. During the studies three prisoners lost their lives to the disease.

By the 1950s the more vicious cruelties of prison life—beatings, torture, starvation, filthiness—had been almost completely eliminated from American facilities. There were, however, a few unfortunate exceptions, especially in poor southern states. One such prison was Louisiana's Angola state penitentiary, where, as Newsweek reported on 12 March 1951, thirty-seven prisoners crippled themselves, some permanently, by slicing the tendons in their heels with razor blades. Warden Rudolph Easterly tried to downplay the incident, but such a graphic protest was difficult to ignore. Governor Earl Long appointed a committee to investigate conditions at Angola. 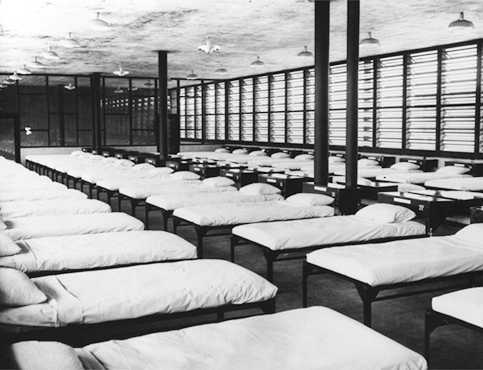 Governor Kennon vowed to improve the conditions at the Angola State Penitentiary, resulting in the construction of modern dormitories in 1957. AP/Wide World Photos. Reproduced by permission.

At the prison the committee found the miserable results of several decades of neglect by the Louisiana state government, beginning during the reign of Governor Long's brother, Huey, in 1928. Prisoners lived crowded together by the hundreds into wooden, tumbledown barracks. Four toilets without seats and four showers were shared among 250 men. Beatings were common. Prisoners were loaned as manual laborers to outside businesses. They were offered little medical treatment and no rehabilitation.

Long had not expected the committee to make a serious investigation, but the scandal over the disgraceful conditions at Angola contributed to the governor's downfall. Prison reform became a major issue of Louisiana's gubernatorial election of 1952, when Robert F. Kennon defeated Long's hand-picked successor. Acknowledging that "Angola was one of the big reasons I was elected," Kennon immediately set about authorizing the necessary funds and enlightened leadership "to change Angola from one of the worst prisons in the country to one of the best."