What Does a Biofuels Developer Do?

Biofuels developers create alternatives to fossil fuels. Biofuels are energy that is made from living matter—mostly plants. Bioethanol, biodiesel, and biogas are common types of biofuels, and although they currently have many uses developers are constantly searching for new and better ways to produce these and other types of biofuels. A biofuels developer's work always involves chemistry—how to eke out the most from each fuel and fuel mixture. For example, bioethanol, a familiar biofuel, usually consists of a blend of gasoline and alcohol made from corn, sorghum, potatoes, wheat, sugar cane, or biomass. Biomass is living matter left over from harvesting another crop, such as cornstalks or other vegetable waste. Biofuels developers research different crops to see which of these various blends and in what measure will burn at the right temperature, burn cleanly, and burn well enough to get reasonable mileage and performance.

At a Glance: Biofuels Developer

Certification and Licensing None

Indoors in an office or lab environment

Other fuels that have been developed or are currently being worked on by biofuels developers include biodiesel, which is Page 42  |  Top of Articleproduced from oil taken from plants or animals. It is currently mostly blended with petroleum diesel. Grease or oil from cooking can also be converted to biodiesel and is more sustainable because it is a byproduct of another process. Currently, with existing engines these oils can make up only 20 percent of the vehicle's fuel mixture. Developers are trying to find the right mix of oils so that the fuel burns cleanly enough to meet Environmental Protection Agency (EPA) and California emission standards set in 2007 for diesel. Gerhard Knothe is a research chemist and biofuels developer at the Food and Industrial Oil Research unit of the US Department of Agriculture's National Center for Agricultural Utilization Research in Peoria, Illinois. His interview appears on ScienceWatch.com : “My research is mainly concerned with the use of vegetable oils and their derivatives as alternative diesel fuels and related aspects. My educational background is in chemistry, specifically a Ph.D. in organic polymer chemistry.”

The last biofuel, biogas, is created as a by-product of decomposing plant and animal waste such as landfills, waste treatment facilities, and dairies. Biogas consists primarily of methane and carbon dioxide, both of which are greenhouse gases. The main challenge for biofuels developers is to make sure biogas burns cleanly to avoid having these by-products pollute the atmosphere. However, this fuel holds a lot of promise for developing countries because it has other uses besides transportation. Biogas can also be used for cooking and electricity and can be developed from readily found materials such as animal dung. Some biogas developers teach people in countries such as India to make biogas. The United States also takes advantage of biogas. Freshkills landfill in New York City produces enough biogas to power thirty thousand homes a year.

A biofuels developer may have a background in chemistry or biology but also needs math to do his or her work. This is because much of developing a new fuel depends on calculating the amount of raw product it will take to produce enough fuel to run a generator, electric light, or car. A biofuels developer who is in charge of a scientific team needs to oversee and communicate to others on staff. Biofuels developers also need to communicate the results of their research to their supervisors.

Much technical skill is involved in researching the biofuels. Developers must understand the potential of a particular fuel source, such as algae, then know how to separate and recover the fuel from the source. Then they have to evaluate the efficiency of the fuel and the cost efficiency of extracting the fuel. They must set up and construct their own experiments to figure out the viability of the fuel source. For this reason biofuels developers are not entry-level jobs but usually the culmination of years in the field. 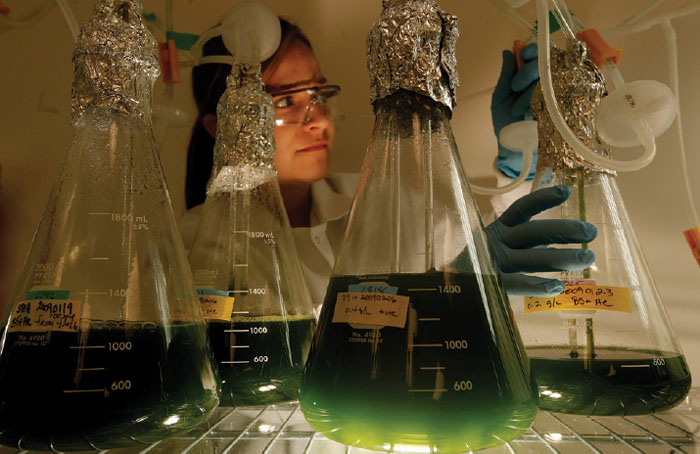 A researcher works with beakers containing algae that will be used in the production of biofuels. Biofuels developers seek to improve existing alternative fuels as well as create new ones.

Often biofuels developers work closely with farmers. In 2014, for example, biofuels developers were working with North Dakota farmers to develop a new type of ethanol from sugar beets. Because farmers must plan their crops three to four years in advance, biofuel developers must guarantee farmers that they will take all of their beets for several years in a row while they are developing the fuel. The beets that produce biofuels are called industrial beets, and they are genetically different from the beets grown for humans to eat. In addition to obtaining enough beets to make a refinery economically efficient, crops for biofuels must meet certain Environmental Protection Agency standards to reduce greenhouse gas emissions. So biofuel developers must prove that their fuel, still under development, will be able to do Page 44  |  Top of Articleso. There will be other hurdles once they have obtained the beets and built a refinery to extract the sugars and further refine those sugars into a usable fuel. All of these steps will be overseen by the biofuels developer.

Because the federal government oversees and often provides financial incentives to biofuels companies, people who work in biofuel development have to be able to work with many restrictions. Biofuel companies also work with the federal government in an attempt to influence energy policy, including relaxing or implementing different fuel standards or changing standards that may be outdated as a result of new fuel developments. Biofuels developers, because they are the experts on the impact of their fuels, are often asked to participate in these discussions. Susan Hager was a biologist working on cancer treatments who switched to working in the biofuels industry. She comments on these difficulties in an interview in biomassmagazine.com : “I really thought, what could be more challenging than working with [the] FDA trying to get drugs approved and on the market? … Trying to establish consistent energy policy is actually harder than getting a cancer drug approved.”

Another large project involving the work of biofuels developers is a collaboration between the Boeing Company, an Abu Dhabi airline company, and others. Biofuel developers at Boeing are working on a new type of biofuel from a plant called a halophyte. These plants have several advantages because they can be grown in the desert so the crops will not compete with food crops. They can also be watered with saltwater, so will not use up valuable freshwater supplies. Using halophytes to develop a biodiesel could have a significant impact on lowering the cost of fuel. Boeing and other airline companies are interested in developing biofuels because the cost of fuel has a significant impact on the cost of travel.

How Do You Become a Biofuels Developer?

The minimum education required for this position is a bachelor's degree in chemistry, biochemistry, microbiology, chemical engineering, or related field. However, most employers will require that Page 45  |  Top of Articlea job candidate have at least five to ten years of experience in the biofuels field in addition to a bachelor's degree. Those with a master's degree, however, will be not be required to have as much job experience. Candidates who go on to have earned a PhD degree may be able to have little or no actual work experience and still be hired for an entry-level position. This is because the position of developer often carries with it managerial responsibilities and knowledge of specialized equipment.

As with many jobs that require lab work, many in the field highly recommend working an internship to gain valuable work experience. Interested students can seek out internships at companies that specialize in biofuels and also at oil companies, which are doing their own biofuels research. Most of the internship opportunities are for graduate students. One internship offered at the National Renewable Energy Laboratory posted on Indeed.com describes the internship duties this way: “The intern will join a team of researchers who perform environmental sustainability assessments of energy technologies. The specific project involves estimating air pollutant emissions from the life cycle of biofuel production (feedstock production, handling and transport, fuel conversion). The core skills required are centered on chemical or process engineering-based estimation of air emissions from industrial processes, focused mainly at the biorefinery.”

A biofuels developer uses many of the same skills that apply in other science careers. That is why a variety of different science degrees can be used to become a biofuels developer. Often, though, a desire to do work that benefits Earth is something biofuels developers share. In an interview for biomassmagazine.com Hager talks about what led her to switch from immunology and cancer research to a career in biofuels. “The clean energy sector is probably the only other industry as altruistic as trying to cure cancer. … I started to get passionate about the technologies I was reading about. The company I joined had this really cool bacteria—biology at the core with really slick engineering.” People who work in this industry often have an interest in Page 46  |  Top of Articlethe environment and like the idea of searching for innovative ways to address environmental concerns.

In addition to having an interest in a green job, other skills are required. Excellent written and oral communication skills are necessary, as research is often written up and must be communicated to others. Knowledge of federal regulations and requirements of the development of biofuels is also necessary. As with many science-based careers, biofuels developers will also work with a lot of technical equipment, including oxygen monitors, flow sensors, compound microscopes, mass spectrometers, as well as technical software.

Biofuel developers usually work indoors in a lab or office environment. They must use specialized equipment and be proficient at using scientific instruments and lab protocol to come up with accurate research results. Those who work in colleges and universities may have a grant to complete their work.

According to recruiter.com , biofuels developers earn a high salary, from $96,000 to $144,000. This is tied to the fact that the job requires Page 47  |  Top of Articleeither an advanced degree or an undergraduate degree with the addition of at least five to ten years of work experience.

The position of biofuels developer is usually already at a management level position, and so opportunities to advance beyond it are few. However, running a research and development project is the epitome of advancement in this position. In such a position, a biofuels developer is involved with a product from conception in a lab all the way through to a commercial product.

What Is the Future Outlook for Biofuels Developer?

The Bureau of Labor Statistics, while not offering hard numbers, believes that all areas of green jobs will grow. The bureau is optimistic about careers in biofuels in particular because of the increase in government and private investment in the efforts. Careers in biofuels, in particular specialized positions such as in product development, should continue to experience robust growth.

ABO is a nonprofit organization whose mission is to promote the development of viable commercial markets for renewable and sustainable commodities derived from algae.

BIO is the world's largest trade association representing biotechnology companies, academic institutions, state biotechnology centers, and related organizations across the United States and in more than thirty other nations. BIO members are involved in the research and development of innovative health care, agricultural, industrial, and environmental biotechnology products.

The CFDC actively supports the increased production and use of fuels that can reduce air pollution and oil imports. CFDC develops support in industry and government to foster a healthy national energy policy. CFDC works with all interested parties to support clean fuel regulations and new technologies.