There are essentially three sources of radioactive elements. Primordial nuclides are radioactive elements whose half-lives are comparable to the age of our solar system and were present at the formation of Earth. These nuclides are generally referred to as naturally occurring radioactivity and are derived from the radioactive decay of thorium and uranium. Cosmogenic nuclides are atoms that are constantly being synthesized from the bombardment of planetary surfaces by cosmic particles (primarily protons ejected from the Sun), and are also considered natural in their origin. The third source of radioactive nuclides is termed anthropogenic and results from human activity in the production of nuclear power, nuclear weapons, or through the use of particle accelerators. 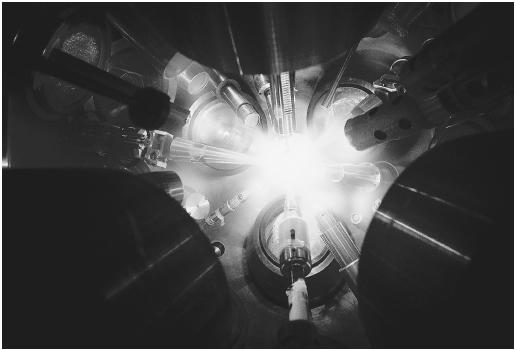 Lasers focus on a small pellet of fuel in attempt to create a nuclear fusion reaction (the combination of two nuclei to produce another nucleus) for the purpose of producing energy.

Marie Curie was the founder of the field of nuclear chemistry. She was fascinated by Antoine-Henri Becquerel's discovery that uranium minerals can emit rays that are able to expose photographic film, even if the mineral is wrapped in black paper. Using an electrometer invented by her husband Pierre and his brother Jacques that measured the electrical conductivity of air (a precursor to the Geiger counter), she was able to show that thorium also produced these rays—a process that she called radioactivity. Through tedious chemical separation procedures involving precipitation of different chemical fractions, Marie was able to show that a separated fraction that had the chemical properties of bismuth and another fraction that had the chemical properties of barium were much more radioactive per unit mass than the original uranium ore. She had separated and discovered the elements polonium and radium, respectively. Further purification of radium from barium produced approximately 100 milligrams of radium from an initial sample of nearly 2,000 kilograms of uranium ore.

In 1911 Ernest Rutherford asked a student, George de Hevesy, to separate a lead impurity from a decay product of uranium, radium-D. De Hevesy did not succeed in this task (we now know that radium-D is the radioactive isotope 210Pb), but this failure gave rise to the idea of using radioactive isotopes as tracers of chemical processes. With Friedrich Paneth in Vienna in 1913, de Hevesy used 210Pb to measure the solubility of lead salts—the first application of an isotopic tracer technique. De Hevesy wentPage 169  |  Top of Article on to pioneer the application of isotopic tracers to study biological processes and is generally considered to be the founder of a very important area in which nuclear chemists work today, the field of nuclear medicine. De Hevesy also is credited with discovering the technique of neutron activation analysis, in which samples are bombarded by neutrons in a nuclear reactor or from a neutron generator, and the resulting radioactive isotopes are measured, allowing the analysis of the elemental composition of the sample.

In Germany in 1938, Otto Hahn and Fritz Strassmann, skeptical of claims by Enrico Fermi and Irène Joliot-Curie that bombardment of uranium by neutrons produced new so-called transuranic elements (elements beyond uranium), repeated these experiments and chemically isolated a radioactive isotope of barium. Unable to interpret these findings, Hahn asked Lise Meitner, a physicist and former colleague, to propose an explanation for his observations. Meitner and her nephew, Otto Frisch, showed that it was possible for the uranium nucleus to be split into two smaller nuclei by the neutrons, a process that they termed "fission." The discovery of nuclear fission eventually led to the development of nuclear weapons and, after World War II, the advent of nuclear power to generate electricity. Nuclear chemists were involved in the chemical purification of plutonium obtained from uranium targets that had been irradiated in reactors. They also developed chemical separation techniques to isolate radioactive isotopes for industrial and medical uses from the fission products wastes associated with plutonium production for weapons. Today, many of these same chemical separation techniques are being used by nuclear chemists to clean up radioactive wastes resulting from the fifty-year production of nuclear weapons and to treat wastes derived from the production of nuclear power.

In 1940, at the University of California in Berkeley, Edwin McMillan and Philip Abelson produced the first manmade element, neptunium (Np), by the bombardment of uranium with low energy neutrons from a nuclear accelerator. Shortly thereafter, Glenn Seaborg, Joseph Kennedy, Arthur Wahl, and McMillan made the element plutonium by bombarding uranium targets with deuterons, particles derived from the heavy isotope of hydrogen, deuterium (2H). Both McMillan and Seaborg recognized that the chemical properties of neptunium and plutonium did not resemble those of rhenium and osmium, as many had predicted, but more closely resembled the chemistry of uranium, a fact that led Seaborg in 1944 to propose that the transuranic elements were part of a new group of elements called the actinide series that should be placed below the lanthanide series on the periodic chart. Seaborg and coworkers went on to discover many more new elements and radioactive isotopes and to study their chemical and physical properties. At the present, nuclear chemists are involved in trying to discover new elements beyond the 112 that are presently confirmed and to study the chemical properties of these new elements, even though they may exist for only a few thousandths of a second. 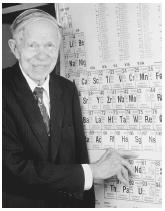 Nobel laureate Glenn T. Seaborg was among those who discovered many radioactive elements and isotopes.

As early as 1907 Bertram Boltwood had used the discovery of radioactive decay laws by Ernest Rutherford and Frederick Soddy to ascribe an age of over two billion years to a uranium mineral. In 1947 Willard Libby at the University of Chicago used the decay of 14C to measure the age of dead organic matter. The cosmogenic radionuclide, 14C, becomes part of all living matter through photosynthesis and the consumption of plant matter.Page 170  |  Top of Article Once the living organism dies, the 14C decays at a known rate, enabling a date for the carbon-containing relic to be calculated. Today, scientists ranging from astrophysicists to marine biologists use the principles of radiometric dating to study problems as diverse as determining the age of the universe to defining food chains in the oceans. In addition, newly developed analytical techniques such as accelerator mass spectrometry (AMS) have allowed nuclear chemists to extend the principles of radiometric dating to nonradioactive isotopes in order to study modern and ancient processes that are affected by isotopic fractionation. This isotopic fractionation results from temperature differences in the environment in which the material was formed (at a given temperature, the lighter isotope will be very slightly more reactive than the heavier isotope), or from different chemical reaction sequences.

The newest area in which nuclear chemists play an important role is the field of nuclear medicine. Nuclear medicine is a rapidly expanding branch of health care that uses short-lived radioactive isotopes to diagnose illnesses and to treat specific diseases. Nuclear chemists synthesize drugs from radionuclides produced in nuclear reactors or accelerators that are injected into the patient and will then seek out specific organs or cancerous tumors. Diagnosis involves use of the radiopharmaceutical to generate an image of the tumor or organ to identify problems that may be missed by x rays or physical examinations. Treatment involves using radioactive compounds at carefully controlled doses to destroy tumors. These nuclear medicine techniques hold much promise for the future because they use biological chemistry to specify target cells much more precisely than traditional radiation therapy, which uses radiation from external sources to kill tumor cells, killing nontarget cells 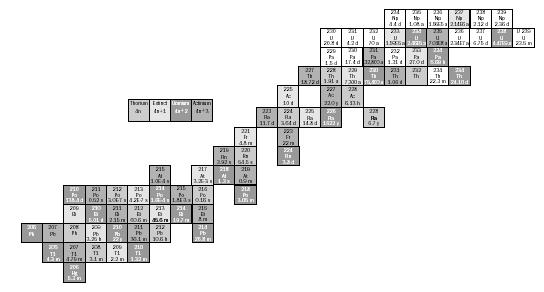 as well. Additionally, the use of nuclear pharmaceuticals containing the short-lived isotope 11C has allowed nuclear chemists and physicians to probe brain activity to better understand the biochemical basis of illnesses ranging from Parkinson's disease to drug abuse.

Division of Nuclear Chemistry and Technology of the American Chemical Society. Available from .

Society of Nuclear Medicine. Available from .