The Black Panther Party (BPP) came to represent the West Coast manifestation of Black Power as well as the angry mood within urban African American communities in the 1960s. The group's main influences were Malcolm X, especially after his 1964 break from the Nation of Islam, and Robert F. Williams, the then Cuban-based civil rights leader and advocate of armed self-defense. Philosophically, the organization was rooted in an eclectic blend of Marxist-Leninism, black nationalism, and the revolutionary movements of Africa and Asia.

The BPP was founded in Oakland, California, in October 1966 by Huey Newton and Bobby Seale. The name of the organization was taken from the Lowndes County Freedom Organization, which had used the symbol and name for organizing in the rural black belt of Alabama in 1965. The BPP was initially created to expand Newton's and Seale's political activity, 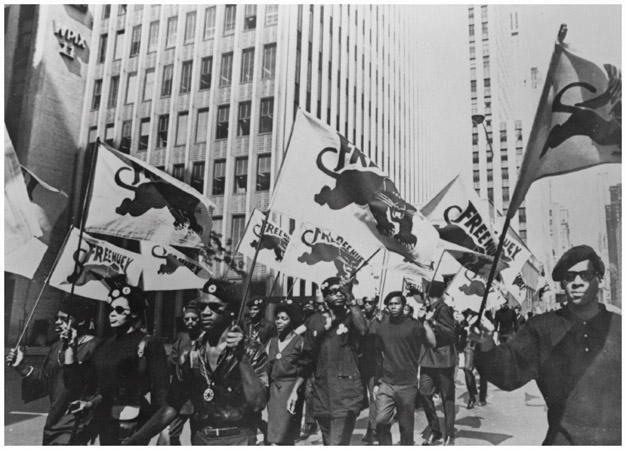 Black Panthers. Members of the Black Panthers march in New York in July 1968 to protest at the trial of Huey Newton. MPI/STRINGER/ARCHIVE PHOTOS/GETTY IMAGES.

particularly “patrolling the pigs,” which referred to monitoring police activities in black communities to ensure that civil rights were respected.

Tactically, the BPP advocated “picking up the gun” as a means to achieving liberation for African Americans. Early on, Newton and Seale earned money to purchase guns by selling copies of Mao Zedong's Little Red Book to white radicals on the University of California at Berkeley campus. The group's “Ten Point Program” demanded self-determination for black communities, full employment, decent housing, better education, and an end to police brutality. In addition, the program included more radical goals: exemption from military service for black men, all-black juries for African Americans on trial, and “an end to the robbery by the capitalists of our Black Community.” Newton, the intellectual leader of the group, was appointed its first minister of defense and Eldridge Cleaver, a prison activist and writer for the New Left journal Ramparts, became minister of information. Sporting paramilitary uniforms of black leather jackets, black berets, dark sunglasses, and conspicuously displayed firearms, the Panthers quickly won local celebrity.

A series of dramatic events earned the Black Panthers national notoriety in 1967. That spring, as a result of the Panthers' initial police surveillance efforts, members of the California state legislature introduced a bill banning the carrying of loaded guns in public. In response, a group of Black Panthers marched into the capitol in Sacramento carrying loaded weapons. Then, on October 28 of the same year, Newton was arrested on murder charges following an altercation with Oakland police that left one officer dead and Newton and another patrol officer wounded. The arrest prompted the BPP to start a “Free Huey!” campaign, which attracted national attention through the support of Hollywood celebrities and noted writers and spurred the formation of Black Panther chapters in major cities across the nation. In addition, Newton's arrest forced Seale and Cleaver into greater leadership roles in the organization. Cleaver, in particular, with his inflammatory rhetoric and powerful speaking skills, increasingly shaped public perception of the Panthers with incendiary calls for black retribution and scathing verbal attacks against African American “counterrevolutionaries.” He claimed the choice before the United States was “total liberty for black people or total destruction for America.”

In February 1968 former Student Nonviolent Coordinating Committee (SNCC) leader Stokely Carmichael, who had been invited by Cleaver and Seale to speak at “Free Huey!” rallies, challenged Cleaver as the primary spokesman for the party. Carmichael's Pan-Africanism, emphasizing racial unity, contrasted sharply with other Panther leaders' emphasis on class

struggle and their desire to attract white leftist support in the campaign to free Newton. The ideological tension underlying this conflict resulted in Carmichael's resignation as prime minister of the BPP in the summer of 1969 and signaled the beginning of a period of vicious infighting within the black militant community. In one incident, after the Panthers branded Ron Karenga—head of the Los Angeles–based black nationalist group US—a “pork chop nationalist,” an escalating series of disputes between the groups culminated in the death of two Panthers during a shootout on the University of California at Los Angeles campus in January 1969.

At the same time, the federal government stepped up its efforts to infiltrate and undermine the BPP. In August 1967 the FBI targeted the Panthers and other radical groups in a covert counterintelligence program, COINTELPRO, designed to prevent “a coalition of militant black nationalist groups” and the emergence of a “black messiah” who might “unify and electrify these violence-prone elements.” FBI misinformation, infiltration by informers, wiretapping, harassment, and numerous police assaults contributed to the growing tendency among BPP leaders to suspect the motives of black militants who disagreed with the party's program. On April 6, 1968, police descended on a house containing several Panthers, killing the party's seventeen-year-old treasurer, Bobby Hutton, and wounding Cleaver, who was then returned to prison for a parole violation. In September authorities convicted Newton of voluntary manslaughter. In December 1969, two Chicago party leaders, Fred Hampton and Mark Clark, were killed in a police raid.

By the end of the decade, twenty-seven members of the BPP had been killed, Newton was in jail (although he was released after a successful appeal in 1970), Cleaver had fled to Algeria to avoid prison, and many other Panthers faced lengthy prison terms or continued repression. In 1970 the state of Connecticut unsuccessfully tried to convict Seale of murder in the death of another Panther in that state.

By the early 1970s the BPP, which had been severely weakened by external attack, internal division, and legal problems, declined rapidly. After his release from prison in 1970, Newton attempted to wrest control of the party away from Cleaver and tried to revive the organization's popular base. In place of Cleaver's fiery rhetoric and support for immediate armed struggle, Newton stressed community organizing, set up free breakfast programs for children, and ultimately supported participation in electoral politics. These efforts, though, were undermined by widely published reports that the Panthers engaged in extortion and assault against other African Americans. By the mid-1970s most veteran leaders, including Seale and Cleaver, had deserted the party, and Newton, faced with a variety of criminal charges, fled to Cuba.

After his return from exile, Newton earned a doctorate, but he was also involved with the drug trade. In 1989 he was shot to death in a drug-related incident in Oakland. Cleaver drifted rightward in the 1980s, supporting conservative political candidates in several races. He died on May 1, 1998, as a result of injuries he received in a mysterious mugging. Seale continued to do local organizing in California.

In 1995 Mario Van Peebles directed the feature film Panther, which attempted to bring the story of the BPP to another generation. The Panthers are remembered today as much for their cultural style and racial posturing as for their political program or ideology.

In the 1990s the New Black Panther Party for Self Defense was formed, with the stated intention of reviving the fight for black power. Former members of the original group have been unsuccessful in stopping the new group from co-opting the Black Panther name. The Anti-Defamation League has called the new group “the largest organized anti-Semitic and racist black militant group in America.” Some members sport paramilitary uniforms of black jackets, black boots, and black berets, and they have been known to carry weapons. Some say the group was started by Dallas, Texas, talk radio show host Aaron Michaels in 1989 or 1990; others say it began with Michael McGee, a member of the original Black Panthers, in 1990.

The group attained national attention following the 1998 death of James Byrd Jr., a forty-nine-year-old African American killed in Jasper, Texas, by three white men who brutally beat him and dragged him by a chain attached to a pickup truck. The New Black Panthers have held protests, marches, boycotts, rallies, and press conferences and have become involved in a range of events that range from police shootings to gentrification of black neighborhoods. The members insist they are carrying on the legacy of the original Black Panthers, which was also associated with both violence and positive change.

Hilliard, David, and Lewis Cole. This Side of Glory: The Autobiography of David Hilliard and the Story of the Black Panther Party. Boston: Little, Brown, 1993.

Nelson, Alondra. Body and Soul: The Black Panther Party and the Fight against Medical Discrimination. Minneapolis: University of Minnesota Press, 2011.

Ongiri, Amy Abugo. Spectacular Blackness: The Cultural Politics of the Black Power Movement and the Search for a Black Aesthetic. Charlottesville: University of Virginia Press, 2010.

Pearson, Hugh. The Shadow of the Panther: Huey Newton and the Price of Black Power in America. Reading, MA: Addison-Wesley, 1994.

Spence, Lester K. Stare in the Darkness: The Limits of Hip-Hop and Black Politics. Minneapolis: University of Minnesota Press, 2011.