Despite the fact that Americans pride themselves on constitutional protections for free speech, there have been many attempts to limit speech in the United States. Beginning in 1798 with the First Sedition Act, Congress has passed laws banning diverse kinds of speech: criticism of the government, speaking out against war, associating with the Communist Party, obscenity, slander, libel, “fighting words,” and seditious speech that attempts to overthrow the government. None of these limits has been so controversial or so damaging as the attempt by Senator Joseph McCarthy in the 1950s to purge the United States of anyone remotely connected with the Communist Party. His unsubstantiated charges led to wrecked lives and careers in all walks of life.

The inherent irony of McCarthyism—the name given to the attempts to seek out and criminalize those suspected of sympathizing with communism—was that by the time of his “Red Scare,” American communism was all but dead. The lesson to be learned from his hysteria and the ensuing witch hunt is that even when speech is protected to the extent that it is in the United States, it is still vulnerable to attacks from those who wish to limit the right of others to disagree with them. Those lessons attained new relevancy after the terrorist attacks on the United States on September 11, 2001. On the grounds of fighting terrorism, the U.S. government made major inroads on American rights to privacy, taking particular aim at Arab Americans, academia, and the press.

THE RISE OF AMERICAN COMMUNISM

During the early days of industrialization in the United States, the country played host to a large, active Socialist Party. American workers began to join labor unions and engage in strikes. The surge of immigrants who brought with them a tradition of radicalism influenced native workers who felt exploited by low wages and long working hours to protest against the factory owners. By the 1930s the American Communist Party was in full swing; it came to be known as “the red decade,” and author Daniel Aaron dubbed it “a time of ‘smelly orthodoxies.’”

The 1930s began with worldwide depression and ended with storm clouds of war around the world. In the throes of economic famine, the country was vulnerable to differing visions and ideologies created by upheaval and despair. American intellectuals—introspective, disillusioned, and articulate—became 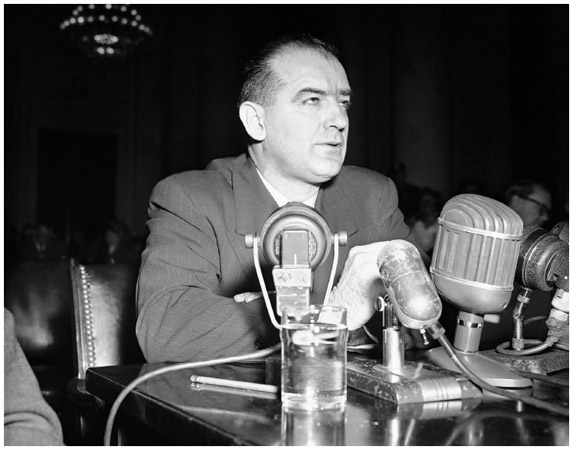 McCarthy Testifies. Wisconsin senator Joseph R. McCarthy appears before a Senate foreign relations subcommittee on March 8, 1950, in Washington, D.C., to testify about his allegations that communists had infiltrated the State Department. AP IMAGES.

the voice of a people whose world had ceased to be the expected bulwark against want, instability, and insecurity. American communists believed that Soviet communism could provide a model for economic stability and social justice. The heyday of the American Communist Party began with a party that was 70 percent foreign-born and ended with a party that was 44 percent professional and white-collar natives.

A large number of Americans joined the Communist Party for social as well as ideological reasons. Clubs, such as the John Reed Clubs, provided a home for fledgling writers and artists and for those who needed to belong to something in which they could believe. Speeches by Communist Party officials, which frequently focused on the defeat of fascism, had mass appeal to the disillusioned portion of the American population. Richard Crossman writes in The God That Failed that such individuals “had lost faith in democracy and were willing to sacrifice ‘bourgeois liberties’ in order to defeat Fascism. Their conversion, in fact, was rooted in despair—a despair of Western values.”

THE DECLINE OF AMERICAN COMMUNISM

However, as the 1930s progressed, many Americans began to reexamine their attraction to communism. A number of events influenced the decline in its popularity, including Joseph Stalin's purges within the Soviet Union and the Non-Aggression Pact he signed with Adolf Hitler in 1939. Alfred Kazin spoke for American communists as a whole when he cried: “It was wrong to make common cause with Hitler, wrong to expose the world to war.” Following World War II, the fear of communism became an entrenched element in American society as the Soviet-American alliance slowly deteriorated. In 1947 President Harry Truman signed an executive order that barred communists, fascists, and other totalitarians from the national payroll. Also included in the ban were individuals who were guilty of “sympathetic association” with undesirables or their organizations. The stage was set for McCarthy.

Joseph McCarthy (1908–1957) was born near Appleton, Wisconsin. He received a law degree in 1935 but was not a success as a lawyer. He handled only four cases in his nine months of practice, bragging that he supported himself by playing poker. While practicing law, McCarthy was accused of destroying judicial records. He won his first election by claiming that his sixty-six-year-old opponent was “seventy-three” or “eight-nine”

and was too old to govern. He joined the marines during World War II but left early to launch an unsuccessful bid for the Senate. He would later falsely claim that he had been wounded in action.

After winning an election to the Senate, McCarthy paid little attention to the early days of the so-called Red Scare. But as the Cold War escalated, Americans felt more vulnerable to the threat of communism. China fell to the communists, the Soviet Union exploded its first atomic bomb, and Alger Hiss and Julius and Ethel Rosenberg were accused of spying for the enemy. After being identified as the worst U.S. senator in a 1949 poll, McCarthy mentioned to supporters that he needed a cause to improve his image. He found it with the threat of communism and erroneously stated that 284 communists were employed by the State Department. Despite the fact that none of these individuals remained at the State Department, McCarthy declared on the floor of Congress that he had “proof” of widespread communist activity in the government of the United States.

Throughout the Red Scare, McCarthy never documented a single communist in a government job. However, he amassed enormous power with his false claims. He insisted that the past twenty years of democratic government had been “a conspiracy so immense, an infamy so black, as to dwarf any in the history of man.” In 1950 Congress passed the McCarran Internal Security Act, virtually outlawing communism in the United States. This was followed in 1954 with the Communist Control Act, forbidding communists from running for political office. Constitutional scholars acknowledge that both laws were clearly in violation of the First Amendment's protection of freedom of association. Limiting access to the ballot is always a distinctive threat to democracy.

Nonetheless, in Barenblatt v. United States in 1959, the Supreme Court insisted that its repeated refusal to view the Communist Party as an ordinary political party left it without First Amendment protections. Mandated loyalty oaths for government employees, including teachers, also violated protected freedom of association. Following the example of Congress, many states passed their own loyalty oaths. In New York State, hundreds of educators lost their jobs. Approximately 20 percent of those eventually called to testify before state and congressional investigating committees were college teachers and graduate students.

By 1954 a blacklist was in place in both the fields of education and entertainment. Few who lost their jobs in either field were ever reinstated. The political witch hunt promoted by McCarthy in the 1950s caused great harm and suffering. Beloved entertainers, such as Charlie Chaplin, were forced out of the United States because of the hysteria. Producers, actors, and writers were blacklisted. Without jobs, many were unable to support their families. Most of the people who McCarthy injured were just people who dared to question the capitalist status quo. Many scholars believe that McCarthy, motivated by a desire for personal recognition, was trying to overthrow the New Deal programs of Franklin D. Roosevelt and establish the Republicans as the majority party. In such an environment, policy makers of both parties were afraid to suggest alternatives to both foreign and domestic policy for fear of being charged with subversion.

McCarthy's tactics proved successful, and in 1952 Dwight D. Eisenhower was elected president, bringing with him a Republican-controlled Congress. Out of 221 Republicans in the House of Representatives, 185 asked to serve on the House Un-American Activities Committee. Richard Nixon used his Senate seat to fight communism and ended up with the vice presidency in 1952 and 1956. Once the Republican Party was in control, McCarthy could no longer rail against communist conspiracies in the government. So he turned his attention to the army, and that proved to be his downfall. Outraged Americans joined with the military and Johnny-come-lately politicians to denounce McCarthyism. McCarthy was censured in 1954 and died three years later, a bitter outcast. Despite this, he has become a cult hero to the New Right and would have felt vindicated by the renewed articulation of the communist threat under Ronald Reagan in the 1980s.

The U.S. Constitution and the First Amendment can only protect the rights of American citizens when they are willing to stand up for the right to engage in free speech, to openly criticize the government and its policy makers, and to demand the inherent democratic right to disagree with others. McCarthyism was able to gain a foothold in the United States only because people were afraid to challenge the loud voices who claimed that democracy was most vulnerable to outside forces. Democracy in the United States has always been most vulnerable to forces within who do not accept the right of dissent. This is the lesson to be learned from McCarthy and his cohorts.

Schrecker, Ellen. Many Are the Crimes: McCarthyism in America. Boston: Little, Brown, 1998.