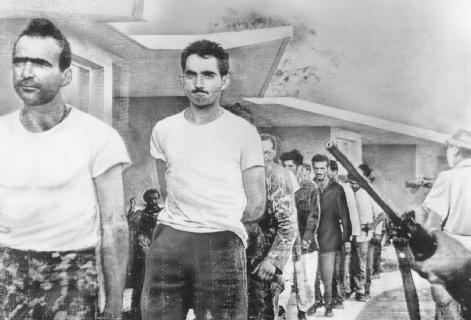 BAY OF PIGS INVASION (17 April 1961), the abortive attempt by Cuban exiles—organized, financed, and led by the U.S. Central Intelligence Agency (CIA)—to overthrow the revolutionary regime of Premier Fidel Castro in Havana. The landing by the 1,453 men of Brigade 2506 on the swampy southwestern coast of Cuba turned within seventy-two hours into a complete disaster as the Castro forces captured 1,179 of the invaders and killed the remaining 274. For the United States and for President John F. Kennedy, who had authorized the operation in his third month in the White House, the Bay of Pigs became a bitter political defeat as well as a monumental failure in a large-scale intelligence enterprise. The invasion led to an increase in Soviet aid to Cuba that climaxed with the installation of nuclear warheads in Cuba in 1962. The Cuban missile crisis that followed was one of the most dangerous moments in post–World War II relations between the United States and the Soviet Union.

The plans for the Bay of Pigs were conceived by the CIA during 1960, toward the end of the Eisenhower administration, on the theory—proved by events to have been totally erroneous—that a landing by the exiles' brigade would touch off a nationwide uprising against Castro. Kennedy's administration shared the Eisenhower administration's fear of Castro's leftward leanings, and Kennedy authorized the plan shortly after Soviet Premier Nikita Khrushchev publicly described conflicts in Vietnam and Cuba as "wars of national liberation" that merited Soviet support.

From the mistaken assumption that Cuba would rise against Castro to its poorly managed execution, the entire venture was marked by miscalculation. To prepare for the invasion, the CIA trained the force in secret camps in Guatemala for nearly six months. But long before the landing, it was widely known in the Cuban community in Florida (and, presumably, the information was also available to Castro agents) that such a landing was in the offing. Finally, the invasion failed because Kennedy refused to provide U.S. air support for the brigade. Castro's aircraft easily disposed of the exiles' tiny air force and proceeded to sink the invasion ships and cut down the men holding the Bay of Pigs beachhead. Twenty months later, in December 1962, Castro released the 1,179 Bay of Pigs prisoners in exchange for $53 million worth of medical supplies and other goods raised by private individuals and groups in the United States.

Kennedy came under criticism both from those who believed the invasion never should have taken place andPage 431  |  Top of Article from Cuban exiles, most notably José Miró Cardona, president of the U.S.-based National Revolutionary Council, who blamed the invasion's failure on Kennedy's refusal to authorize air support. The invasion forced the resignation of the CIA director, Allen Dulles, embarrassed the Kennedy administration, and contributed to decades of tension between the United States and Cuba.

Higgins, Trumbull. The Perfect Failure: Kennedy, Eisenhower, and the CIA at the Bay of Pigs. New York: Norton, 1987.