CUBAN MISSILE CRISIS. Often regarded as the most dangerous crisis of the nuclear age, the Cuban missile crisis of October 1962 was a culmination of several Cold War tensions that had been building for some time. As a result of Cuban leader Fidel Castro's turn toward Soviet-style communism in the early 1960s and the failed U.S.-sponsored Bay of Pigs invasion of April 1961, U.S. Cuban relations were openly hostile by 1962. In April and May 1962, the Soviet premier Nikita Khrushchev decided to deploy Soviet nuclear missiles in Cuba, just ninety miles from Florida. In an agreement with Castro, the weapons would be shipped and installed secretly, so that when they were operational, the West would be presented with a fait accompli.

During August and September 1962, U.S. intelligence found evidence of increasing Soviet military aid arriving in Cuba, including advanced surface-to-air missile installations, IL-28 Beagle nuclear-capable bombers, and several thousand Soviet "technicians." Refugee reports also suggested that Soviet ballistic missiles were on the island. Although U.S. intelligence could not confirm these reports, critics of President John F. Kennedy's administration used them in political attacks during the lead-up to the November congressional elections. In response, in September, Kennedy publicly warned that if weapons designed for offensive use were detected in Cuba, "the gravest consequences would arise."

On 14 October, a U-2 aerial reconnaissance flight over Cuba returned photographs of long, canvas-covered objects. As American photo analysts pored over the photos during the next twenty-four hours and compared their findings to their catalogs of known Soviet weaponry, it became clear that the Soviets were installing medium-range ballistic missiles (MRBMs) and launch pads in Cuba, where they would be within easy striking distance of much of the mainland United States.

Having just dealt with the civil rights riots at the University of Mississippi, the Kennedy administration again found itself confronted with a crisis. The president was informed of the discovery on the morning of 16 October and immediately convened a White House meeting of his top national security advisers, a body that later became officially known as the Executive Committee of the National Security Council, or ExComm. Kennedy decided not to confront the Soviets until he and the ExComm could consider and prepare courses of action. During this series of top secret meetings, several courses of action were considered, ranging from direct military strikes on the missile sites, a full-scale invasion of Cuba, a quid pro quo removal of American Jupiter missiles in Turkey, and a blockade of the island. Acutely aware that miscalculation by either side could spark nuclear war, Kennedy settled upon a blockade of Cuba in tandem with an ultimatum to the Soviets to remove the missiles, both to be announced during a special national broadcast on television during the evening of 22 October. In that broadcast, Kennedy declared that a naval quarantine of Cuba would go into effect on the morning of 24 October and would not be lifted until all offensive weapons had been removed. He also announced that he had ordered increased surveillance of Cuba and, ominously, that he had directed the armed forces "to prepare for any eventualities."

On 24 October, as U.S. strategic nuclear forces were placed on DEFCON 2, the highest alert status below actual nuclear war, the world waited anxiously for the Soviet response to the quarantine. Despite some tense moments, the deadline ultimately passed without serious incident, as several Soviet-chartered ships either changed course or stopped short of the quarantine line. On 25 October, the 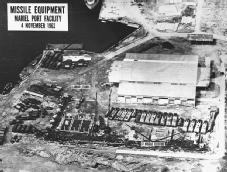 U.S. ambassador to the United Nations, Adlai E. Stevenson, famously confronted his Soviet counterpart, Valerian Zorin, with photographic evidence and said he would "wait until hell freezes over" for a Soviet explanation. At U.S. insistence, the Organization of the American States officially condemned the Soviet-Cuban action and thereby formalized Cuba's hemispheric isolation.

Over the next few days, U.S. intelligence reported that not only were the MRBMs nearing operational status, but there were also intermediate-range ballistic missiles (IRBMs) and tactical nuclear weapons on the island. While U.S. forces continued to mobilize, a series of letters between Kennedy and Khrushchev was supplemented by several secret unofficial channels, the most notable of which was Attorney General Robert F. Kennedy's secret meetings with Anatoly Dobrynin, the Soviet ambassador to the United States, and Georgi Bolshakov, the intelligence chief at the Soviet embassy.

On Saturday, 27 October, the crisis was at its peak. During the afternoon, reports came in of an American U-2 being shot down over Cuba by a surface-to-air missile. As tension mounted, the Joint Chiefs of Staff reported that they were ready to launch an invasion of Cuba within twenty-four hours. In communications on 27 and 28 October, Khrushchev formally capitulated by agreeing to dismantle the missiles and ship them back to the Soviet Union. In turn, Kennedy publicly announced that he had pledged to provide a noninvasion guarantee to Cuba conditional on the offensive weapons being removed and the implementation of effective international verification. Secretly, he also agreed to remove the American Jupiter missiles from Turkey.

Although the crisis had been largely defused peacefully, it was not over. Castro refused to allow UN inspectors onto Cuban sovereign territory, and Khrushchev initially refused to accept that the Soviet IL-28 Beagle bombers were offensive weapons. Intensive discussions through the United Nations finally led to Khrushchev agreeing on 20 November to remove the bombers in exchange for a lifting of the naval quarantine.

For many, the crisis demonstrated the dangers of the nuclear age. Subsequently, a telephone hotline was established linking the White House and the Kremlin and efforts were intensified to secure arms control agreements and détente.

May, Ernest, and Philip Zelikow, eds. The Kennedy Tapes: Inside the White House during the Cuban Missile Crisis. Concise ed. New York, Norton, 2002.