McCARTHYISM has been misnamed. Often identified with the bizarre antics of the Wisconsin senator Joseph McCarthy, the anticommunist political repression to which he gave a name had been in operation for years before he appeared at a Republican banquet in Wheeling, West Virginia, in February 1950. And it was to continue for several years after he self-destructed before the nation's television viewers at the Army-McCarthy hearings in the spring of 1954. There was nothing unique about McCarthy's charges of subversion in high places. Ever since the 1930s, conservative politicians and journalists had been attacking the New Deal administrations of Franklin Roosevelt and Harry Truman for being "soft on communism." But it took the Cold War to bring the originally partisan issue of anticommunism from the margins into the political mainstream.

Although McCarthyism came in many flavors, all its adherents agreed that it was essential to eliminate the danger of American communism. They differed, however, in their assessment of what that danger was. Right-wingers, hostile to everything on the left, attacked liberals 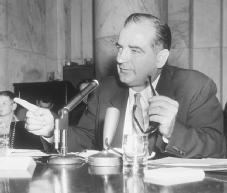 Senator Joseph McCarthy. The Wisconsin Republican's own actions in pursuit of communism in the early 1950s played only one part in the longer Cold War period of excessive zeal named for him. AP/WIDE WORLD PHOTOS

as well as communists, while moderates, who were willing to purge actual Communist Party members, tried to protect noncommunists from unfounded persecution. They did not always succeed. In the supercharged atmosphere of the early Cold War, the anticommunist crusade spun out of control, creating the most widespread and longest lasting episode of political repression in American history.

By the time that repression sputtered to an end in the late 1950s, thousands of men and women had lost their jobs, hundreds had been deported or sent to prison, and two—Ethel and Julius Rosenberg—had been executed. Most, but not all, of these people had once been in or near the American Communist Party. Because that party had been the most dynamic organization on the American left during the 1930s and early 1940s, thousands of activists gravitated into its orbit, attracted by its opposition to war and fascism and its support for the labor movement and racial equality. Most of these men and women were idealistic individuals who had not anticipated that their political activities would get them into trouble years later, when anticommunism came to dominate American politics.

What made McCarthyism so powerful was that so many different agencies and individuals took part in its operations. It functioned in accordance with a two-stage procedure. The supposed communists were first identified; then they were punished—usually by being fired. Most of the time, an official body like the Federal Bureau of Investigation or the House Un-American Activities Committee (HUAC) handled the first stage, while a public or private employer took care of the second. Because it was common to identify McCarthyism only with the initial identification stage of the procedure, many otherwise moderate and even liberal Americans were able to collaborate with it. Claiming to deplore the excesses of the congressional investigations, they nonetheless applied sanctions against the people McCarthy and his allies had fingered.

They now realize they were wrong. The sanctions imposed on thousands of school teachers, longshoremen, film directors, union officials, civil servants, automobile workers, and housewives during the late 1940s and 1950s seriously violated those people's constitutional rights. But at the time, most Americans believed that communists were Soviet puppets who might subvert the government, steal official secrets, or sabotage defense plants whenever their Kremlin masters gave the word. Since some American communists had spied for the Soviet Union during World War II, that demonized stereotype, though exaggerated, was quite plausible. The highly publicized cases of Alger Hiss and the Rosenbergs reinforced the stereo-type, convincing liberals and conservatives alike that communists were so dangerous they did not deserve the same rights as other Americans. That consensus made it possible for a wide range of government officials and private employers to punish people for their political views and affiliations.

Washington led the way. Not only did the federal government create and carry out some of the earliest anticommunist purges, but it also developed the ideological justification for them. The FBI and its militantly anticommunist director, J. Edgar Hoover, oversaw the process. Much of the information about communism that fed the loyalty-security investigations, criminal prosecutions, and congressional hearings that dominated the McCarthy era came from the FBI and reflected that organization's distorted view of the red menace. In addition, because Hoover and his men were so eager to eradicate American communism, they supplemented their normal operations with a wide range of unauthorized and even illegal activities, including wiretaps, break-ins, and leaks to right-wing journalists and politicians.

HUAC and the other congressional investigators were among the main recipients of those leaks. Not only did the committees identify specific individuals as communists, but they also helped disseminate the anti-communist scenarios that fueled the purges. Friendly witnesses told stories about their experiences in the Communist Party and identified its members, while unfriendly witnesses remained silent. Most of them would have been willing to talk about their own political activities, but they balked at describing those of others. However, because the Supreme Court did not protect people accused of communism during the late 1940s and early 1950s, witnesses who did not want to name names had to rely on the Fifth Amendment's privilege against self-incrimination and refuse to answer any question that might subject them to prosecution. Although they did not go to prison, most of these "Fifth Amendment" witnesses lost their jobs.

The most well-known unfriendly witnesses were the so-called Hollywood Ten, a group of screenwriters and directors who had defied HUAC on First Amendment grounds in 1947. Even before they went to prison, the Ten were on the street, early victims of an informal but highly effective blacklist that kept hundreds of men and women out of the entertainment industry during the 1950s. Similar blacklists emerged in other sectors of the economy, thus ensuring that most of the people who tangled publicly with an anticommunist investigation or were targeted by the FBI would lose their jobs. As the repression spread, unorthodox opinions or controversial activities could also invite dismissal.

The threat of unemployment was a powerful deterrent. People shrank from involvement in anything that could conceivably be linked to the left. Because of the stigma and secrecy that surrounds McCarthyism, it is hard to assess its impact. If nothing else, it narrowed the political spectrum, marginalizing if not silencing all critics of the status quo.

Schrecker, Ellen. Many Are the Crimes: McCarthyism in America. Boston: Little, Brown, 1998.