NATION OF ISLAM. The Nation of Islam (NOI), whose members are widely referred to as Black Muslims, was founded in Detroit in 1930 by Wallace D. Fard. An enigmatic figure with mysterious origins, Fard surfaced in the city in 1929 and attracted the attention of poor blacks as he walked the streets selling fabrics and expounding novel religious and political messages. Fard skillfully blended tenets of traditional Islam with anti-white preachments that resonated with the psychological and social needs of economically strapped blacks. This group, frustrated by the inability of traditional religions to generate change in their lives and keenly aware of the impact of racism on their opportunities, was drawn to Fard's message.

The cosmology of the NOI was exotic but carefully crafted to offer a millenarian vision to African Americans, promising a future apocalypse for the evil (whites) and salvation to the true believers (blacks or "Original People"). According to Fard's theology, an insane scientist, Yakub, who lived 6,000 years ago, grafted a new human species from the Original People. Over time, the grafted species mutated and became white. An angry God looked with disfavor on the manipulations of Yakub and decreed that the white race of people he created would rule for 6,000 years and then be vanquished. At that point, the Original People would inherit a world where true nirvana would reign.

Researchers in the 1990s who examined state and federal records concluded that Fard was born Wallace Dodd Ford on 25 February 1891. Despite the uneven quality of record keeping in the period, most researchers conclude that he was white. Public records reveal that he grew up in southern California and became involved in petty crime at an early age. In 1926 he was sentenced to serve time in San Quentin prison for selling narcotics to an undercover policeman. FBI records show that after his release from San Quentin in 1929 he headed east, spent a brief period in Chicago, then settled in Detroit.

As Fard began constructing his religious and political message, one of his most ardent followers was Elijah Poole. After repeated clashes with white officials in his hometown of Sandersville, Georgia, Poole joined the thousands of blacks who fled the South to search for greater freedom and economic opportunity. Elijah was a tireless and loyal lieutenant to Fard and slowly gained authority within the mosque. He established the South-side Mosque in Chicago in 1932, and in 1933, Fard granted Elijah the surname "Muhammad." 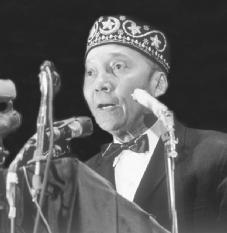 Elijah Muhammad. The longtime leader of the Nation of Islam in 1966, the year after the assassination of his former protégé Malcolm X. © CORBIS

The Muslims, with their antiwhite rhetoric, soon became prime targets for law enforcement. In 1933, Fard abruptly told his followers that God had preordained that he leave Detroit, and that he was passing on the mantle of leadership to his faithful student, Elijah. Despite Fard's claim of divine direction, evidence since disclosed suggests that the worsening relationship with Detroit police officers was the primary impetus for Fard's departure. Under Elijah Muhammad's direction, the NOI survived, but grew slowly in northern cities. Bitter contests over leadership and finances plagued the NOI's viability through the depression years.

After the bombing of Pearl Harbor in 1941, Muhammad was drafted into the army but refused to serve, citing his Islamic religious beliefs and expressing sympathy for the nonwhite Japanese. He was convicted of draft evasion and served three years in the federal prison at Milan, Michigan. His bold antigovernment stand earned him martyr status among the faithful and helped solidify his position in the Muslim community, where competition for standing was constant. While in prison, Muhammad noted that through inmate labor and cooperation, the facility was able to produce food to meet the needs of the prison population. Elijah expanded this insight into an economic strategy for the Nation of Islam. When released in 1946, Elijah returned to Chicago, and with enhanced personal authority he began rebuilding the NOI, which had languished during his detention. Consistent with the goal of racial self-reliance, Elijah established farms, dairies, retail food outlets, and a number of small Muslim-owned businesses.

In 1948, Malcolm Little, serving time in a Michigan prison for petty larceny, became attracted to the Muslim ideology and from prison began a correspondence with Muhammad. Shortly after his release in 1952, he visited the leader in Chicago; soon afterward he converted and was designated "Malcolm X." The frail and diminutive Muhammad was not a formidable presence on public podiums; however, he recognized Malcolm's talent as a spokesperson and organizer. Malcolm X's skill and unwavering dedication to Muhammad led to a swift ascent within the Muslim organization. In succession, he revitalized and headed mosques in Boston, Philadelphia, and New York. Malcolm was responsible for a slow but steady upsurge in membership. However, in July 1959, the television documentary The Hate that Hate Produced propelled the Nation of Islam and Malcolm X into America's consciousness.

The CBS network and the show's producers, Mike Wallace and Louis Lomax, calculated that sensational publicity about the antiwhite ideology of the Black Muslims would prompt hostile reactions in the black communities and arrest the development of the NOI. Instead, the show sparked a sharp upsurge of black interest in the Muslims and their eloquent spokesman, Malcolm X. Soon, Malcolm was a sought-after commentator on America's racial morass. The media cast him as counterpoint to the moderation of civil rights leaders. Essentially self-taught, Malcolm became skilled in public debate and held his own against political and intellectual adversaries on campuses and in broadcast studios. He consistently expressed views ridiculing civil rights leaders and their integrationist assumptions. Malcolm was contemptuous of nonviolence and distrustful of a constitutional system that had coexisted for centuries with bigotry and black oppression.

Malcolm X's effectiveness as a national spokesperson was key in the growth of the NOI to approximately 20,000 members by the early 1960s, though estimates vary. Importantly, the NOI founded a nationally distributed newspaper, Muhammad Speaks, that offered news and opinion consistent with the Muslim program. With a circulation of 600,000 (largely through street corner sales by members) by 1966, it was the most widely read black newspaper in the United States.

The most notable Muslim convert was the heavyweight boxing champion (1964–1967) Cassius Clay. Recruited by Malcolm X, Clay converted to the NOI in 1964, and Elijah gave him the name Muhammad Ali. The charismatic and loquacious celebrity gained fame internationally when, in 1967 at the height of the Vietnam War, he refused to be inducted into the army, claiming conscientious objector status. His lawyers argued unsuccessfully that as a Muslim minister he had the same rights as other religious leaders. In explaining his decision, Ali further politicized the dispute by remarking, "no Vietcong ever called me Nigger." Under pressure from congressional powers, U.S. boxing officials stripped Ali of his championship title. Thus, at the height of his pugilistic prowess he was effectively banned from the sport. The actions of officials generated broad sympathy for Ali among African Americans as well as among critics of the war. Ali's position was vindicated when in 1971 the Supreme Court overturned his 1967 conviction for draft evasion.

Tensions grew within the NOI between Malcolm X and the venerable Elijah Muhammad. In 1963, Muhammad disciplined Malcolm when he characterized the assassination of President John F. Kennedy as a case of "chickens coming home to roost." Malcolm accepted Muhammad's sanctions but bridled under what he thought were unnecessary niceties in the face of federal government inaction in the civil rights arena.

The conflicts exploded into violence when Malcolm X was assassinated in Harlem's Audubon Ballroom on 21 February 1965. Three men with ties to Elijah Muhammad's faction were arrested, tried, and sentenced to long prison terms. Speculations about the motives behind Malcolm X's murder centered on his increasingly public statements about his longtime mentor's morality. Elijah had fathered at least ten out-of-wedlock children with Muslim women.

The public perception of the NOI as a radical and aggressive group finds little support in its social and cultural practices. The group was fundamentally conservative in organizational structure, economic outlook, and political matters. Muhammad functioned as an autocratic leader, issuing direction from the top of a rigid hierarchy. Women's roles in the NOI were restricted and subordinated to those of men. The NOI was thoroughly capitalistic in economic matters, holding out hope that its small business initiatives could provide jobs and subsistence needed by poor African Americans. The failure of 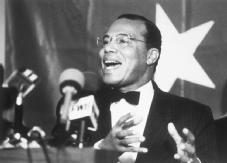 Louis Farrakhan. The fiery head of the new Nation of Islam and chief organizer of the 1995 "Million Man March." AP/WIDE WORLD PHOTOS
Page 521  |  Top of Article

an all-black group to actively participate in the black liberation struggles that were taking place in the United States helped reinforce the suspicions of many that the Muslims' antiwhite rhetoric was never coupled with action. Muhammad deferred to what he believed to be God's divine scheme and discouraged his followers from voting and taking any direct action on behalf of other blacks. Malcolm X cited the NOI's political passivity as a factor in his separation from the organization.

When Elijah died of heart failure on 25 February 1975, the group did not undergo the disruptive factionalism that NOI had experienced in the 1930s and 1960s. Muhammad had named his son Wallace Muhammad as his successor, and the Muslim faithful coalesced around his leadership. Wallace soon announced a new direction for the Nation of Islam, one more closely aligned with orthodox Islam. The organization downplayed the antiwhite theme that for years had been an important drawing card for NOI recruiters. Voting and political participation was endorsed. In 1976, Wallace changed the name of the group to the World Community of Islam in the West (WCIW).

In 1979, the minister Louis Farrakhan, leader of the New York Mosque, announced his departure from Wallace's WCIW and his plans to establish a group under his leadership, reclaiming the name "Nation of Islam." Farrakhan had become skeptical about the reforms instituted by Wallace and vowed that the new NOI would resuscitate the ideology of Wallace's father. Farrakhan's fiery public preachments reflected the style of Malcolm X and attracted the attention of many non-Muslims (especially young people) who admired his bold critiques. During the 1980s and 1990s, few African American leaders stepped forward to express the anger shared by millions of blacks suffering from racial oppression.

Farrakhan's comments about Jews led some critics to accuse him of anti-Semitism, but the charges had little impact on his core constituency. In 1995, Farrakhan spearheaded the drive for a "Million Man March" in Washington, D.C., to encourage black males to acknowledge and atone for past failings and rededicate themselves to social and family responsibilities. Contrary to the predictions of black and white officials, approximately one million black men participated in the demonstration and heard Farrakhan deliver the keynote address.

From the brief tenure of W. D. Fard though the Farrakhan period, the Nation of Islam rhetorically highlighted the drama of black racial identity in the United States. However, Black Muslims held that the tension could only be resolved by racial separatism and group self help—not civil rights and integration. Although the encompassing demands of formal membership in the NOI assured that the organization would remain small, the fusillades against white supremacy launched by figures like Malcolm X and the philosophy of group self-help earned Black Muslims the respect, if not allegiance, of millions of black Americans.

Gardell, Mattias. In the Name of Elijah Muhammad: Louis Farrakhan and the Nation of Islam. Durham, N.C.: Duke University Press, 1996.