TET OFFENSIVE. In the spring of 1967, the communist Vietcong leadership began planning a nationwide offensive aimed at destroying the South Vietnamese government and forcing the Americans out of the Vietnam War. The communists were concerned about the growing U.S. military presence in Vietnam and their own mounting losses. The Vietcong believed that South Vietnam was ripe for revolution and saw the Saigon government as the weak link in the Allied war effort. The Politburo in Hanoi, in conjunction with leaders of the Vietcong, developed a plan for an all-out attack to take place during the Tet holiday at the end of January 1968. The communists expected that a general offensive, aimed primarily at South Vietnamese military and government installations, would encourage a majority of the citizens to turn against the Saigon government. The combination of military action and popular revolution would sweep away the Saigon regime, put in its place a procommunist slate of leaders, and thus force the United States to withdraw from the war. The communists christened their attack the Tong Cong Kich–Tong Khia Nghia, or TCK–TKN (General Offensive–General Uprising) plan. 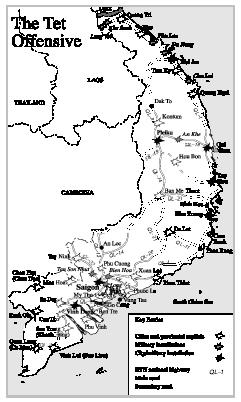 borders with Laos and Cambodia. These attacks were designed to draw allied forces away from urban centers in the eastern part of the country, and gave the communists more opportunity to infiltrate troops and stockpile supplies near dozens of key cities and towns. The allied leaders detected signs of an imminent enemy offensive that would likely take place around the Tet holiday but concluded that the thrust would be limited to the three northern provinces of South Vietnam.

In the early morning hours of 30 January 1968, the communists in the mid-northern section of South Vietnam began their offensive one day early, apparently the result of a miscommunication with Hanoi. They attacked nine cities, including Da Nang, Nha Trang, Pleiku, and Kontum, which gave allied forces partial warning before the main offensive began in the early morning hours of the thirty-first. The communists, however, still managed to achieve a large measure of tactical surprise. Approximately 84,000 communist soldiers attacked Saigon and five of the largest urban centers, thirty-six of forty-four 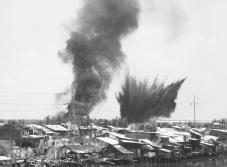 Tet Offensive. The Cholon area of Saigon is hit by two 750-pound bombs during the shelling of the South Vietnamese capital in early 1968. © CORBIS

provincial capitals, and at least sixty-four of 242 district capitals. The communists wreaked havoc and caused confusion, but were soon overcome by the weight of American firepower and the surprisingly able resistance of the South Vietnamese army. With the exception of the city of Hué and the marine base at Khe Sanh, two battles that persisted until March, the offensive collapsed within the first week. As many as 45,000 Vietcong and North Vietnamese army soldiers perished in the offensive, and the popular uprising failed to materialize. However, the offensive caused significant political turmoil in the United States and strengthened the hand of those who wanted to limit or extinguish the American role in Vietnam.