WATERGATE. The largest scandal of Richard M. Nixon's presidency unfolded with the burglary on 17 June 1972 of the National Democratic Committee headquarters in the Watergate apartment-office complex in Washington, D.C. The burglars were employees of the Committee for the Re-election of the President (CRP, called "CREEP" by Nixon's opponents) and were supervised by members of the White House staff. Watergate came to symbolize the efforts of the Nixon administration to subvert the democratic order through criminal acts; the suppression of civil liberties; the levying of domestic warfare against political opponents through espionage and sabotage, discriminatory income tax audits, and other punitive executive sanctions; and attempted intimidation of the news media. President Nixon's direct role in White House efforts to cover up involvement in the Watergate break in was revealed in a tape of a 23 June 1972 conversation with White House chief of staff H. R. Haldeman, in which Nixon discussed a plan to have the CIA pressure the FBI to cease investigation of the Watergate case by claiming that national security secrets would be threatened if the Bureau widened its investigations. It was after this so-called "smoking gun" tape was made public on 6 August 1974 that President Nixon resigned from office on 9 August 1974. 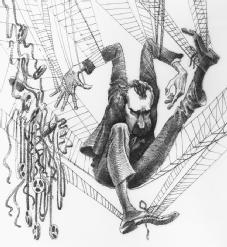 Trapped. In this 1974 political cartoon, President Richard Nixon is caught in a spider's web; tape recordings dangle at his side. LIBRARY OF CONGRESS

Watergate's roots can be traced to White House disappointment with the 1970 congressional elections. Fears that they foretold Nixon's possible defeat in 1972 were aggravated by massive antiwar demonstrations in Washington in 1971. These demonstrations were similar, the Nixon White House believed, to those that had brought down Lyndon B. Johnson's presidency. In an atmosphere of a state of siege, White House special counsel Charles W. Colson developed a list of enemies, including several hundred persons from various walks of life. To cope with the menaces it perceived, the administration recruited undercover agents and made plans for domestic surveillance.

After leaks to the press had led to news accounts, in May 1969, of secret American air bombing raids in neutral Cambodia, the telephones of reporters and of the staff aides of Henry A. Kissinger, then national security assistant to the president, were wiretapped. The White House was further jarred by the publication in June 1971 in the New York Times and other newspapers of the "Pentagon Papers," a confidential Defense Department study of decision making in the Vietnam War. In response, the White House increased the number of operatives trained in security and intelligence and established a "plumbers" unit to prevent "leaks." The Plumbers included E. Howard Hunt Jr., a former CIA agent, and G. Gordon Liddy, a former assistant district attorney in Dutchess County, New York. To secure information to prosecute or discred it Daniel Ellsberg, who had released the "Pentagon Papers," Hunt and other operatives in September 1971 broke into the office of Lewis Fielding, Ellsberg's psychiatrist, where they photographed records and papers.

In the first quarter of 1972, CRP raised unprecedented sums, from which various White House individuals, including Liddy, could draw directly. During the early presidential primaries the Plumbers and their hirelings engaged in espionage and sabotage against the candidacy of Senator Edmund S. Muskie, then considered the strongest potential Democratic presidential nominee. After Muskie's campaign foundered, similar activities were perpetrated against the two remaining leading candidates, Senator George McGovern, the eventual nominee, and Senator Hubert H. Humphrey. Liddy and others devised plans to disrupt the national Democratic convention and, through various contrived acts, to identify McGovern's candidacy with hippies, homosexuals, and draft evaders.

In January 1972 Attorney General John N. Mitchell, White House counsel John W. Dean III, and Jeb Stuart Magruder, an aide to White House Chief of Staff H. R. Haldeman and, in actuality, the chief administrator of CRP, attended a meeting held at the Justice Department. At that meeting Liddy presented a $1 million budgeted plan for electronic surveillance, photography of documents, and other activities for the approaching campaign. The plan was rejected as too expensive. At a second meeting in February, Liddy presented a revised plan and reduced budget. The approved plan centered on bugging 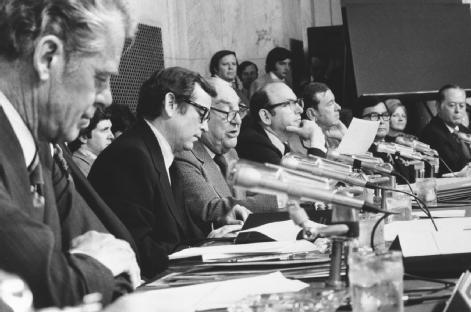 On the night of 27 May 1972 Liddy, Hunt, and James W. McCord Jr., another former CIA operative who had joined the Plumbers, along with a six-man group—chiefly Cuban exiles from Miami led by a former Hunt associate, Bernard L. Barker—taped doors leading to the Democratic headquarters, wiretapped the telephones in the offices, stole some documents, and photographed others. They subsequently monitored the bugs while making futile attempts to break into McGovern's Washington headquarters. Since one tap had been placed improperly in the initial break-in, a Plumbers team returned to the Watergate Democratic headquarters on 17 June. Frank Wills, a security guard at the complex, noticed that some doors had been taped open and removed the tape. When he later returned and found doors retaped, he summoned the Washington police, and the five burglars, including McCord, were arrested and booked. E. Howard Hunt's White House telephone number was found on the person of two of the burglars, the first indication of White House involvement in the burglary.

A cover-up began (and never ended) in order to destroy incriminating evidence, obstruct investigations and, above all, halt any spread of scandal that might lead to the president. In his first public statement concerning Watergate on 29 August, Nixon declared that White House counsel John W. Dean III had "conducted a complete investigation of all leads" and had concluded that "no one in the White House staff" was "involved." Dean in fact coordinated the cover-up.

Hunt and four of the burglars pleaded guilty to all charges; McCord and Liddy stood trial and were convicted(30 January 1973) in the U.S. District Court of Judge John J. Sirica. Throughout the trial Sirica indicated that he believed that more than the seven men were involved. On 23 March, Sirica released a letter to him from McCord, in which McCord stated that higher-ups in CRP and the White House were involved, that the defendants 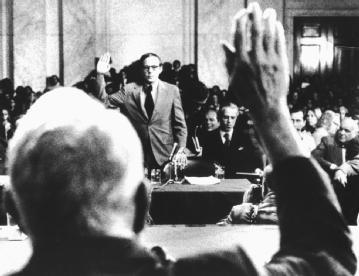 John Dean. The fired White House counsel (background) is sworn in by Senator Sam Ervin, the colorful Senate Watergate committee chairman, on 25 June 1973, before the start of five days of testimony that proved devastating to the president. © CORBIS

had been pressured to plead guilty, and that perjury had been committed at the trial. The president repeatedly professed ignorance of CRP and White House involvement in Watergate. However, his claims were eventually challenged when specific aspects of his own conduct were revealed in criminal trials of his associates, in investigations by the Senate Watergate committee (chaired by Senator Sam Ervin), in staff studies by the House Judiciary Committee, and in tapes of White House conversations.

In statements before the Senate Watergate committee, Dean revealed that the president had promised clemency to Hunt and had said that it would be "no problem" to raise the "million dollars or more" necessary to keep Hunt and other defendants silent. In an address on 30 April 1973 the president accepted "responsibility" for the Watergate events but denied any advance knowledge of them or involvement in their cover-up. A steady procession of White House aides and Justice Department officials resigned and were indicted, convicted (including Mitchell, Dean, Haldeman, and John D. Ehrlichman), and imprisoned. Nixon himself was named an unindicted coconspirator by the federal grand jury in the Watergate investigation, and the U.S. Supreme Court allowed that finding to stand. Relentless probing by Special Watergate Prosecutor Archibald Cox led Nixon to order his firing. Both Attorney General Elliot Richardson and Deputy Attorney General William Ruckelshaus resigned, refusing to carry out Nixon's order. Robert H. Bork, the new Acting Attorney General, fired Cox. Leon Jaworski, Cox's successor, and the House Judiciary Committee, which considered impeachment of the president, were repeatedly rebuffed in requests for tapes and other evidence.

The impeachment charges that were ultimately brought against the president asserted that he had engaged in a "course of conduct" designed to obstruct justice in the Watergate case, and that in establishing the Plumbers and through other actions and inaction, he had failed to uphold the law. On 9 August 1974, faced with imminent impeachment, Nixon resigned as president. On 8 September 1974 his successor, Gerald R. Ford, pardoned Nixon for all federal crimes he "committed or may have committed or taken part in" while in office.

From the time of his resignation to his death in April 1994 Richard Nixon devoted much of his energy to rescuing his reputation from the long shadow of Watergate. For many Americans, acceptance of Ford's pardon by Nixon brought the presumption of felony guilt. Nixon fought attempts to make public his papers as well as the Watergate tapes. In public forums after his resignation Nixon minimized the ethical and legal misconduct of his staff and himself, focusing attention instead on the political context that led to his resignation. In 1990 Nixon's benefactors opened the Richard Nixon Library and BirthplacePage 428  |  Top of Article in Yorba Linda, California, without the benefit of the president's official papers, which are held, by act of Congress, in the Maryland facilities of the National Archives and Records Administration. After Nixon's death the tapes were made public and revealed an extensive pattern of Nixon's personal involvement and criminal action in Watergate.

Kutler, Stanley I. The Wars of Watergate: The Last Crisis of Richard Nixon. New York: Knopf, 1990.