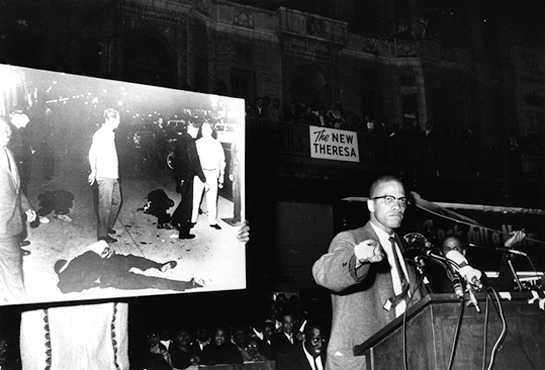 Born Malcolm Little, civil rights leader Malcolm X (1925–1965) advocated violence as a means for change. He later amended his position to include peaceful relationships with other races. © UPI/Corbis-Bettmann.

Malcolm Little was born to a father who was both a preacher and a follower of the black nationalist Marcus Garvey. His father died in mysterious circumstances when Malcolm was young, and after his mother was placed in a mental institution in Michigan, Malcolm, at age fifteen, dropped out of school to live with his half sister in Boston. After a criminal career on the streets on Boston and New York, he was arrested and was sentenced to ten years in prison for robbery.

While in prison Malcolm came into contact with the writings of the Honorable Elijah Muhammad, leader of the Nation of Islam, often called the Black Muslims. Malcolm was converted and replaced his "slave name" of Little with the letter X. After his release from prison in 1954 he joined Muhammad and quickly proved his ability as a preacher and an organizer. He was placed in charge of the New York mosque and within a short time became the most public figure in the Black Muslim movement. He first acquired national attention when he became the focus of a CBS television documentary on the Black Muslims, The Hate That Hate Begot (1959). In the civil rights struggle of the early 1960s Malcolm's black-militant racial separatism seemed a stark contrast to the nonviolent tactics and integrationist demands of Martin Luther King, Jr. As Malcolm attracted more public attention, he aroused the anger and jealousy of the inner circle of the Nation of Islam. He, in turn, was dismayed by the sexual misconduct of Muhammad and by the lavish living of the leader, his family, and close associates. In 1963 Malcolm was suspended by Muhammad for remarks made after the death of President Kennedy and then expelled from the Nation of Islam.

Malcolm then made a second trip to Saudi Arabia, this time completing his hajj, the pilgrimage to Mecca, and on his return announced his new recognition that Islam was not for blacks alone. He became more active in the civil rights movement, organizing the Muslim Mosque, Inc., and the Organization of African-American Unity. He was assassinated by followers of Elijah Muhammad while speaking to his own followers in New York in 1965.