By: Lyndon B. Johnson

In 1937, Franklin D. Roosevelt (served 1933–1945) estimated that 33 percent of the nation was "ill-housed, ill-clad, ill-nourished." To help alleviate suffering, Congress enacted a welfare program that made payments to widows with children. By 1956, the number of Americans living below the poverty line, a government standard of minimum subsistence based on income and family size, dropped to 23 percent.

Despite this decline, from 1950 to 1960 the number of children on welfare had increased from 1.6 million to 2.4 million. Moreover, statisticians made a direct correlation between low income and poor health. Government statistics revealed that 4 percent of middle class families were chronically ill. In contrast, 16 percent of poor families were unhealthy. In addition, the poor were disproportionately afflicted with mental illness, drug addiction, and crime.

In 1962, Michael Harrington wrote the influential book The Other America. Harrington argued that as middle class Americans moved out of urban America to the suburbs, poverty became "less visible." Furthermore, the poor had become alienated from mainstream society, no longer believing in the American dream and were on the verge of giving up. If the United States hoped to rescue the underclass, Harrington contended, the middle class had to become actively involved.

In order the assist the poor, President John F. Kennedy (served 1961–1963), as part of his New Frontier platform, proposed an array of new social programs, including federal money for education, medical care for the aged, urban mass transit, and a federal Department of Urban Affairs. For the most part, Kennedy's domestic agenda was stymied by congressional southern Democrats. After Kennedy's assassination, President Lyndon B. Johnson continued his predecessor's reform agenda.

The Great Society consisted of numerous programs passed between 1964 and 1967 that were designed to expand the social welfare system and eliminate poverty. A committed New Dealer, Johnson sought to create a record Page 227  |  Top of Article of domestic achievement comparable to Roosevelt's. Unlike the New Deal, however, the Great Society was launched amid a period of economic prosperity.

The most ambitious of Johnson's legislative agenda was the Economic Opportunity Act of 1964, which declared a "war on poverty." This act combined the progressive welfare state with the conservative notion of self reliance by giving the poor the opportunity to improve themselves. The act created the Job Corps, which provided the poor with vocational training.

Johnson also sponsored the Elementary and Secondary Education Act, which sought to improve education by providing federal funding to cash-strapped public school districts. The rationale behind the program was that children in city slums and impoverished rural areas were educationally deprived and therefore needed supplemental funding. In the related Head Start program, additional funding was directed toward preschool children. The program contributed to improving children's health by ensuring medical examinations and good meals.

In 1964, Congress appropriated $1 billion to the Great Society and another $2 billion the following two years. Afterward, funding was limited because fiscal resources were directed toward the Vietnam War (1964–1975).

The overall success of the Great Society was mixed. Whereas Head Start was a success, the Elementary and Secondary Education Act failed, as many districts funneled federal revenue to cover ordinary expenses and student performances did not significantly improve. The Job Corps was a dismal failure as training costs were high and relatively few trainees completed the courses. Medicare and Medicaid provided medical treatment for millions, but because the government picked up the tab, health care costs skyrocketed. Nevertheless, from 1963 to 1968 the proportion of Americans living below the poverty line dropped from 20 percent to 13 percent.

SYNOPSIS: On May 22, 1964, President Johnson gave his "Great Society" speech before eighty thousand people, the largest commencement ever attended at the University of Michigan. Johnson challenged students to build a Great Society "a place where the city of man serves not only the needs of the body and the demands of commerce, but the desire for beauty and the hunger for community." 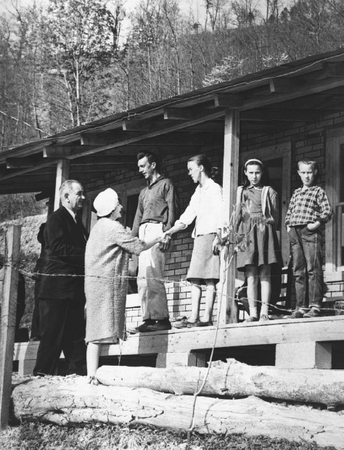 President Lyndon Johnson and Lady Bird Johnson meet members of the Fletcher family of Inez, Kentucky, in April 1964. Johnson declared a "War on Poverty" as central to building the Great Society. © BETTMANN/CORBIS. REPRODUCED BY PERMISSION.
Page 229  |  Top of Article

Harrington, Michael. The Other America: Poverty in the United States. New York: Macmillan, 1962.

Fumento, Michael. "Is the Great Society to Blame? If Not, Why Have Problems Worsened Since '60s?" Investor's Business Daily, June 19, 1992. Available online at http://www.fumento.com/greatsociety.html (accessed April 2, 2003).