The cell is the basic structural unit of a living organism. Cells are very tiny, visible only under a microscope. Some organisms such as bacteria are unicellular, consisting of a single cell. All plants, animals, algae, and fungi are multicellular organisms, organisms made up of more than one cell. A human, for example, consists of about 100 trillion cells. In multicellular organisms, cells differ in structure depending on their roles in the body; nerve cells, skin cells, and blood cells all have different characteristics.

There are two main types of cells, prokaryotes and eukaryotes. These terms also refer to the organisms that possess those types of cells. Prokaryotes do not have a nucleus or organelles wrapped in membranes. The nucleus is the portion of the cell that contains its DNA, or genetic code. An organelle is a small structure that performs a specific set of functions within the eukaryotic cell. Eukaryotes do have a nucleus and organelles. Eukaryotic cells are much bigger than prokaryotic cells.

The Structure and Function of Cells

Cell wall: A tough outer covering that surrounds the cell membrane of plant and fungus cells and bacteria.

Cilia: Short hair-like projections covering the surface of some cells.

Cytoplasm: The semifluid substance of a cell containing organelles and enclosed by the cell membrane.

Cytoskeleton: The network of filaments inside the cell membrane that provides structure to the cell.

DNA: Deoxyribonucleic acid, the molecule that contains the body’s genetic code, the instructions the body uses to build tissues and organs and run physical processes.

Enzyme: A molecule produced by living cells that begins and maintains a biochemical reaction.

Eukaryote: An organism whose cells contain a membrane-bound nucleus and organelles.

Flagellum: A whiplike projection on the surface of a cell used for movement; plural: flagella.

Membrane: A thin, flexible layer of tissue that covers, lines, separates, or connects parts of an organism.

Mitochondrion: An organelle that manufactures the energy a cell uses for its functions; plural: mitochondria.

Nucleus: The organelle that contains the DNA in a eukaryotic cell.

Organelle: A functional structure within the cytoplasm of a cell, usually enclosed by its own membrane.

Plasma membrane: Cell membrane; the thin, flexible, selectively permeable layer that contains the cell’s structures and allows substances in and out.

Prokaryote: A single-celled organism without a nucleus. 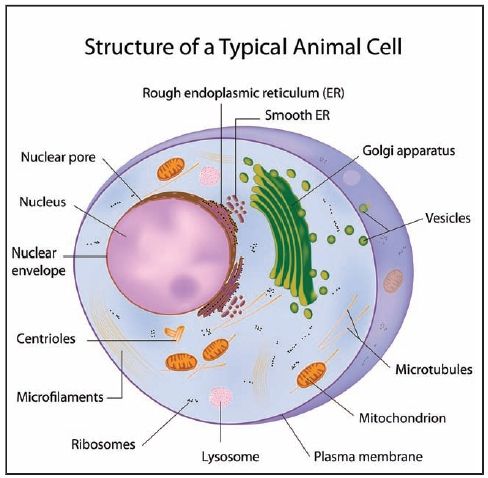 A diagram illustrates and labels the basic structures of a cell. © ALILA MEDICAL MEDIA/SHUTTERSTOCK.COM

The interior of both kinds of cells is called the cytoplasm. Within the cytoplasm of eukaryotes are embedded the cellular organelles. Both types of cells contain small structures called ribosomes that produce proteins, large molecules that are essential to the structure and functioning of all living cells. Ribosomes are not bound by membranes and are therefore not considered organelles.

The Structure of Prokaryotes

The Structure of Eukaryotes

Like prokaryotes, eukaryote cells are enclosed by plasma membranes. Unlike prokaryotes, their cytoplasm contains several organelles bound in membranes. The organelles found in eukaryotes include the membrane system, consisting of the plasma membrane, endoplasmic reticulum, Golgi body, and vesicles; the nucleus; the cytoskeleton; and the mitochondria. In addition, plant cells have special organelles not found in animal cells called chloroplasts, cell wall, and vacuoles. (See the drawing of a plant cell.)

The plasma membrane of the cell is selectively permeable, which means that some substances can pass through the membrane, but others cannot. For example, the products formed by the breakdown of foods can pass into a cell, and the waste products formed within the cell can pass out of the cell. Cells control this process by either adjusting the concentration of fluids inside and outside the membrane or by actively moving substances from one side of the membrane to the other.

The endoplasmic reticulum (ER) consists of flattened sheets, sacs, and tubes of membrane that cover the entire expanse of a eukaryotic cell’s cytoplasm. The ER looks something like a very complex subway or highway system. That analogy is not a bad one, because a major function of ER is to transport materials throughout the cell.

Cells contain two kinds of ER, rough ER and smooth ER. Rough ER contains ribosomes on its outside surface, giving it a rough or grainy appearance. Smooth ER does not. Rough ER is involved in the process of protein synthesis (production) and transport. Proteins made on the ribosomes attached to rough ER are modified, “packaged,” and then shipped to various parts of the cell for use. Some are sent to the plasma membrane, where they are moved out of the cell and into other parts of the organism’s body for use. Smooth ER has many different functions, including the manufacture of lipids (fatlike materials), the transport of proteins, and the transmission of nerve messages.

The Golgi body is named for its discoverer, the nineteenth century Italian scientist Camillo Golgi (1843–1926). It looks somewhat like a stack of pancakes. The Golgi body consists of a pile of membrane-bound, flattened sacs. Surrounding the Golgi body are numerous small membrane-bound vesicles (particles). The function of the Golgi body and its vesicles is to sort, modify, and package large molecules that are secreted by the cell or used within the cell for various functions.

Vesicles are small spherical particles that contain various kinds of molecules. Some vesicles are used to transport molecules from the endoplasmic reticulum to the Golgi body and from the Golgi body to various destinations. Lysosomes are vesicles that contain enzymes involved in cellular digestion. Some protists, for instance, engulf other cells for food. In a process called phagocytosis (pronounced FA-go-sy-t o-sis), the protist surrounds a food particle and engulfs it within a vesicle. This food-containing vesicle is transported within the protist’s cytoplasm until it is brought into contact with a lysosome. The food vesicle and lysosome merge, and the enzymes within the lysosome are released into the food vesicle. The enzymes break down the food into smaller parts for use by the protist.

The nucleus directs all cellular activities by controlling the synthesis of proteins. Proteins are critical chemical compounds that control almost everything that cells do. In addition, they make up the material from which cells and cell parts themselves are made.

The cytoskeleton is the skeletal framework of the cell. The cell’s skeleton consists of three kinds of protein filaments that form networks. These networks give the cell shape and provide for cellular movement. The three types of cytoskeletal fibers are microtubules, actin filaments, and intermediate filaments.

Microtubules are very thin, long tubes that form a network of “tracks” over which various organelles move within the cell. Microtu-bules also form small, paired structures called centrioles within animal cells. These structures are not considered organelles because they are not bounded by membranes. Centrioles are involved in the process of cell division (reproduction).

Some eukaryotic cells move about by means of microtubules attached to the exterior of the plasma membrane. These microtubules are called flagella and cilia. Cells with cilia also perform important functions in the human body. The airways of humans and other animals are lined with such cells that sweep debris and bacteria upwards, out of the lungs and into the throat. There, the debris is either coughed from the throat or swallowed into the digestive tract, where digestive enzymes destroy harmful bacteria.

Actin filaments are especially prominent in muscle cells, where they provide for the contraction of muscle tissue. Intermediate filaments are relatively strong and are often used to anchor organelles in place within the cytoplasm.

The mitochondria are the power plants of cells. Each sausage-shaped mitochondrion is covered by an outer membrane. The inner membrane of a mitochondrion is folded into compartments called cristae. The matrix, or inner space created by the cristae, contains the enzymes necessary for the many chemical reactions that eventually transform food molecules into energy.

Plant cells have several organelles not found in animal cells. These include plastids, vacuoles, and a cell wall.

Plastids are vesicle-type organelles that perform a variety of functions in plants. For example, amyloplasts store starch and chromoplasts store pigment molecules that give some plants their vibrant orange and yellow colors. Chloroplasts are plastids that carry out photosynthesis, a process in which water and carbon dioxide are transformed into sugars.

Vacuoles are large vesicles bound by a single membrane. In many plant cells, they occupy about 90 percent of the cellular space. They perform a variety of functions in the cell, including storage of organic compounds, waste products, pigments, and poisonous compounds as well as digestive functions.

All plant cells have a cell wall that surrounds the plasma membrane. The cell wall of plants consists of a tough carbohydrate substance called cellulose laid down in a medium or network of other carbohydrates. (A carbohydrate is a compound consisting of carbon, hydrogen, and oxygen found in plants and used as a food by humans and other animals.) The cell wall provides an additional layer of protection between the contents of the cell and the outside environment. The crunchiness of an apple, for instance, is attributed to the presence of these cell walls. 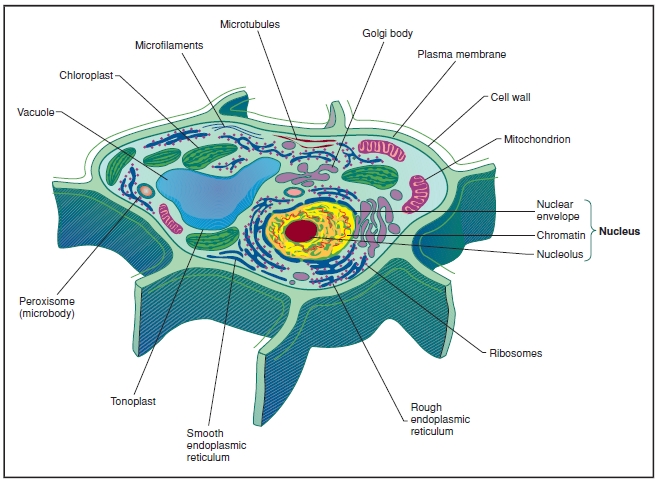