“Won't you be my neighbor?” Fred McFeely Rogers asked television viewers this question for more than three decades on Mister Rogers' Neighborhood, a children's show that helped create an entire genre of educational television with a focus on nurturing

children's self-worth. Few series have come close to maintaining the continuity and moral tenor of Rogers's long-running PBS series. Lacking the commercial development of nearly all the network's other children series, Rogers's program maintained an unwavering commitment to education.

Born in Pennsylvania in 1928, Rogers began work in television with variety programs such as The Voice of Firestone (1949–1959) and The Lucky Strike Hit Parade (1950–1959). In November 1953 he moved back to his roots in western Pennsylvania, where he began working at WQED, the nation's first community-supported public television station. Rogers began experimenting with children's programming while at WQED, including the award-winning Children's Corner, which contained the puppets and other details that would later been seen on Mister Rogers' Neighborhood. During this period, he also began studying child development and became an ordained Presbyterian minister. Each of these sensibilities infused his on-air persona.

After the 1966 release of Fred Rogers's MisteRogers Neighborhood, he renamed the program Mister Rogers' Neighborhood and it was released nationally in 1968. That same year he was appointed chairman of the Forum on Mass Media and Child Development of the White House Conference on Children and Youth. Rogers had become a leading spokesman on American education and, particularly, how the television medium would be used to help develop it. He steered the programming toward a noncommercial format that could be easily coordinated with classroom use. By 1971 he had created Family Communications, Inc., a company dedicated to children and providing educational support to the families and people who care for them.

Until his death in 2003, Rogers resisted the flamboyant staging of some children's programs for a conservative, unchanging appearance. Each show begins and ends in the living room of his “television house.” At the opening of each show, Mister Rogers invites the television viewer to be his neighbor and to enter his house. Then he hangs up his coat in the closet, slips into his cardigan sweater, and changes into his sneakers. From his living room, Rogers introduces the viewer to a new idea or object that becomes the focus of the show for the day or week. After the brief introduction, Mister Rogers visits other people in his neighborhood or places where everyday things are made—a balloon factory or a crayon factory, for example. 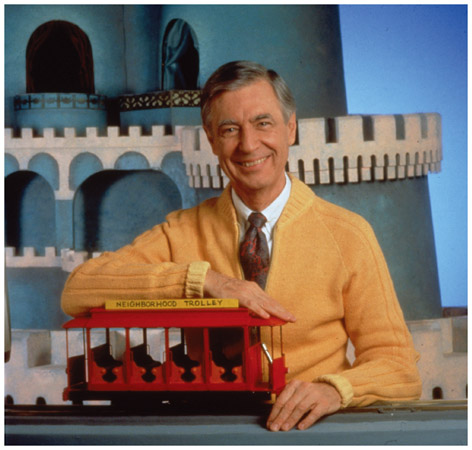 of Make-Believe,” a puppet kingdom ruled by puppets King Friday XIII and Queen Sara Saturday and inhabited by several other puppets as well as humans. To help children make a distinction between real and pretend, none of the characters in the Neighborhood of Make-Believe ever appear in Mister Rogers's “real” world. Despite advances in visual technology, the conveyor between the “real” world of Mister Rogers's living room and the imaginary world of make-believe remained a mechanical trolley.

The themes in the “Neighborhood of Make-Believe” often revolved around the management of feelings, and they were always consistent with the theme introduced by Mister Rogers at the beginning of the show. Puppets and humans used cooperative and constructive problem-solving in the Neighborhood of Make-Believe. While the puppets tried to understand and resolve their emotional troubles, the humans would mediate and help console them, often in song. Some of the songs included “What Do You Do with the Mad that You Feel When You Feel So Mad You Could Bite?” and “There Are Many Ways to Say I Love You.” Through his resistance to more modern technologies, supporters often said Rogers created a timeless program that appeals to any viewer from any era.