Impeachment is the principal power that Congress may use to remove presidents, Supreme Court justices, and certain other high-ranking federal officials for misconduct. Modern understanding of this power is based on its original meaning, its distinctive features, and the patterns and trends in impeachment practices throughout American history.

In fashioning the six clauses of the Constitution that set forth the procedures required for impeachment, the Framers deliberately distinguished the process from that which had existed in Britain and the colonies prior to the Constitution's drafting and ratification. Whereas the king was not subject to impeachment or removal, Article II, Section 4 explicitly makes the president, among others, subject to the impeachment process. Article II, Section 4 also narrows the range of people subject to the impeachment process from what it had been in England, where any citizen (other than a member of the royal family) could be impeached. In particular, this section limits impeachment to “[t]he President, Vice-President and all civil officers of the United States.” Article II, Section 4 also narrows the range of impeachable offenses to “Treason, Bribery, or other high Crimes or Misdemeanors.” Although the Framers discussed “high Crimes or Misdemeanors” only in abstract terms as referring to political crimes or “great offenses” or “breaches of the public trust,” they hoped to restrict the scope of impeachable offenses in order to deviate from the parliamentary practice, which recognized no limit to the grounds for which people could be impeached.

In Article I, Section 3 the Framers tried to make conviction more difficult than it had been in Great Britain, where the House of Lords could convict with a bare majority. In contrast, the Framers divided the impeachment authority between the House and the Senate. The House was given the “sole power to impeach,” which required majority approval, but the Constitution further provided that the Senate had the “sole power to try impeachments” and that “no Person shall be convicted [and removed from office] without the Concurrence of two thirds of the Members present.” The Framers vested trial authority in the Senate, because they believed that senators would be better educated, more virtuous, higher minded, and more resistant to majoritarian pressures than members of the House of Representatives. Moreover, the Framers vested the trial in the Senate, because senators would be well suited to handling the procedural demands of an impeachment trial, in which the Senate should, in Alexander Hamilton's words in Federalist, No. 65, “never be tied down by such strict rules, either in the delineation of the offense by the prosecutor, or in the construction of it by judges, as in the common cases serve to limit the discretion of courts in favor of personal security” ( 1961, 398 ).

Although the British Parliament could impose any punishment upon conviction, including death, Article I, Section 3, clause 7 limits punishment in the federal impeachment process “to removal from Office, and disqualification to hold and enjoy any Office of honor, Trust, or Profit under the United States.” Article II expressly forbids the president from pardoning an individual for the offenses committed, whereas the king could have pardoned any person convicted in an impeachment trial. In contrast to Great Britain, in which impeachment was understood to be a criminal proceeding, Article I, Section 3, clause 7 provides that “the Party convicted [in an impeachment trial] shall nevertheless be liable and subject to Indictment, Trial, Judgment and Punishment, according to law.” The Framers provided that Article III judges would have special tenure, namely, that they may serve “during good Behavior.” Additionally, the Framers added two requirements to be employed in presidential impeachment trials: They required the chief justice to preside over presidential impeachment trials to avoid the conflict of interest that the vice president, who usually presides over the Senate, might have in presiding over the trial of the one person who stands between him and the presidency. The Framers further required senators to be “on oath or affirmation” when sitting in presidential impeachment trials. As they saw it, both requirements would increase the solemnity of these proceedings.

Beyond fashioning these distinctions, the Framers left the scope of the federal impeachment power to be worked Page 54  |  Top of Articleout by Congress in practice. Since ratification, the House of Representatives has impeached seventeen officials, including two presidents and one Supreme Court justice.

Of these seventeen officials, the Senate has convicted only eight, all lower-court federal judges. In the course of these proceedings and other occasions on which the House has considered authorizing impeachment inquiries, Congress has faced two related constitutional questions. The first is whether impeachment is the exclusive means for removing judges and justices, and the second is whether Article III predicates judicial tenure on “good Behavior” and therefore allows judges or justices to be removed not only for “Treason, Bribery, or other high Crimes and Misdemeanors” but also any misbehavior, including bad or erroneous decisions. A minority of scholars and some members of Congress have persistently argued that the Constitution's “good Behavior” clause establishes both an alternative mechanism to impeachment and removal for disciplining judges and a standard for removing them separate from that of impeachment and removal. Pointing to the practices in some states prior to ratification and to the plain meaning of the “good Behavior” clause, they argue that the clause therefore allows judges and justices to be removed for any misconduct, including wrong or mistaken decisions. But most scholars and most members of Congress over the years have sided, on both these questions, with judicial independence. They maintain that a natural inference from the structure of the Constitution, backed by original meaning, is that the impeachment process is the exclusive means by which Congress may remove judges or justices, that the “good Behavior” clause vests judges and justices with life tenure and thus protection from political retaliation for their judicial decisions, and that impeaching and removing justices and judges for bad or erroneous decisions would completely undermine their judicial independence.

The principle of judicial independence was vindicated in the only impeachment of a Supreme Court justice to date. In 1804 the House, then controlled by Republicans, impeached Associate Justice Samuel Chase, a fiercely partisan Federalist, based on claims that he had rendered flagrantly partisan rulings in the trials of two Republicans charged with violating the Federalist-backed Alien and Sedition Act. A bare majority voted in the Senate to convict Chase but fell short of the required two-thirds for conviction and removal. In his book about the impeachment trials of Justice Chase and President Andrew Johnson, Chief Justice William Rehnquist suggests that Chase's acquittal was a seminal decision upholding the “complete independence of federal judges from removal because of their judicial decisions” ( Kazin 2011, 301 ).

Subsequently, impeachment resolutions have been introduced in the House of Representatives against two other Supreme Court justices, Chief Justice Earl Warren and Associate Justice William O. Douglas. In quickly dismissing inquiries against both justices, the House followed the principle initially laid down by Chase's acquittal. On one other occasion, President Richard M. Nixon's attorney general, John Mitchell, and other White House aides successfully managed in 1969 to force Justice Abe Fortas to resign from the Supreme Court. Fortas thereby avoided further public embarrassment and a possible impeachment inquiry because of a contract into which he briefly entered after joining the Court to provide legal counsel to a foundation run by a former client who had been subsequently convicted for securities fraud.

Early in his second term, Nixon had his own impeachment troubles. In the course of congressional inquiries into the White House's possible involvement in a burglary of the Democratic national headquarters, a White House aide revealed that Nixon had been secretly taping Oval Office conversations. When Nixon refused to comply with a judicial subpoena to turn the tapes over to a special prosecutor who was investigating the burglary, the latter asked the Supreme Court to intervene. In a unanimous ruling, the Court ordered Nixon to turn the tapes over to the special prosecutor. Shortly thereafter, Nixon complied with the order, and the House Judiciary Committee approved three articles of impeachment against him. In August 1974 Nixon resigned from office after congressional leaders assured him of certain impeachment by the House and conviction and removal from office by the Senate.

Almost twenty years later, the Supreme Court was invited to become even more involved in an impeachment controversy. In this case, Walter Nixon, a federal district judge, challenged the Senate's use of a trial committee to gather evidence and take testimony in preparation for a final vote of the full body on whether to convict and remove him from office. Judge Nixon argued that the constitutional provision vesting the Senate with “the sole power to try impeachments” required the Senate as a whole to be involved in every phase of removal proceedings. The Supreme Court unanimously agreed with Solicitor General Kenneth Starr that challenges to Senate impeachment trial procedures raised nonjusticiable, political questions that were committed by virtue of the text and original meaning of the Constitution to the sole, nonreviewable discretion of the Senate. In other words, the Court agreed not to decide the merits of the judicial challenge to the Senate's impeachment trial procedure, leaving them to the final discretion of the Senate. 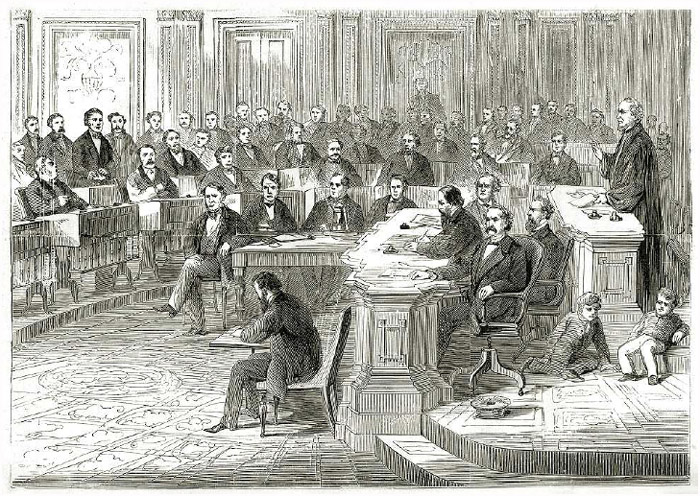 The Supreme Court's other noteworthy involvement in the federal impeachment process was in the person of the chief justice, who, pursuant to constitutional mandate, is required to preside over presidential impeachment trials. In 1867 the House of Representatives impeached President Andrew Johnson for illegally obstructing Reconstruction and the Tenure in Office Act, which required Senate approval prior to the president's dismissing any officials whom he had nominated and the Senate had confirmed. Chief Justice Salmon Chase presided over Johnson's impeachment trial with an iron hand. He declared at the outset his understanding that “the Constitution has charged the Chief Justice with an important function in the [impeachment] trial … of the President.” ( Kazin 2011, 303 ). In discharging that function, he helped to shape the rules adopted by the Senate to govern the president's impeachment trial. Those rules continue to this day, and they include the rule he favored that empowered him to rule initially on every procedural issue subject to override by a majority of the Senate. Subsequently, the Senate overrode his evidentiary rulings seventeen times. Most of his procedural rulings were upheld, however, even though they usually favored Johnson's defense, and the Senate eventually acquitted Johnson by a single vote.

In 1999 William Rehnquist became the second chief justice to preside over a presidential impeachment trial after the House of Representatives impeached President Bill Clinton for perjury and obstruction of justice. Whereas many senators had questioned Chief Justice Chase's impartiality (and suspected he wanted to use the proceedings to further his presidential ambitions), Chief Justice Rehnquist commanded the respect of all senators, and no senator ever challenged nor did the Senate overrule any of his procedural rulings in the trial. He had no apparent impact on President Clinton's acquittal in the Senate on both counts.

Since President Clinton's acquittal, one other historic impeachment proceeding occurred. In 2010 the House impeached and the Senate convicted and removed Thomas Porteous from a federal district judgeship in Louisiana. His Page 56  |  Top of Articleimpeachment and conviction were unusual because they were the first to be based in part on misconduct before he became a federal judge. He had failed to tell the Senate during his confirmation proceedings that he had committed previous misconduct as a state court judge. In addition, Porteous became only the third official in American history to be both removed from office and disqualified from ever holding another federal office. Porteous's removal and conviction are an important reminder of the continued potency and availability of the federal impeachment power as a check against the abuse of federal power. 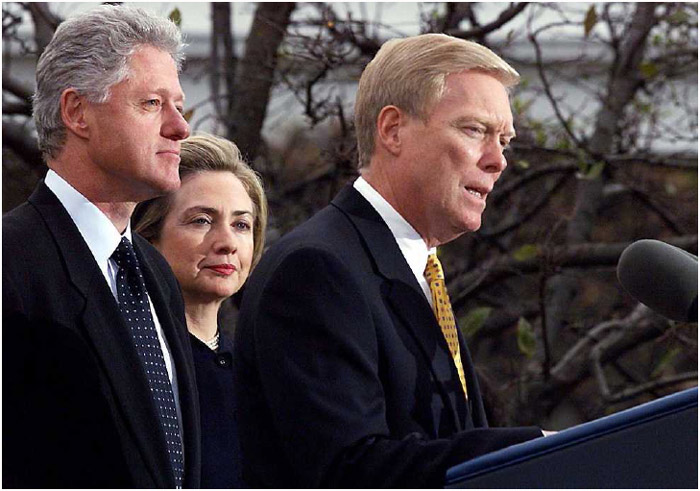