Capital punishment, widely referred to as the death penalty, is the supreme act of punishment that over the years has been imposed for major criminal offenses, such as murder, sexual assault, and treason. The most common method of execution in the United States today is lethal injection, but electrocution, the gas chamber, hanging, and the firing squad have also been used since the 1970s. From 1930 to 2008, the United States carried out a total of 4,900 executions (including 36 by federal authorities). Although a vast majority of the cases involved murder, less than 1 percent of homicides in America result in the death penalty.

In the culture wars, aside from the ages-old philosophical and moral debate, the death penalty has been controversial because of issues pertaining to race, the moral culpability of the mentally handicapped and juveniles, and wrongful convictions. Many of the U.S. Supreme Court cases on capital punishment have been split verdicts, indicative of political polarization that is part of the judicial wars. These cases have focused primarily on the issue of prohibiting “cruel and unusual punishment” as guaranteed by the Eighth Amendment to the U.S. Constitution and as applied to the states by the Fourteenth Amendment.

Supporters of capital punishment, including groups such as the Texas-based Justice For All (founded in 1993), view it as carrying out justice and bringing closure to the victim’s family. They also argue that the death penalty deters crime and costs less than lifetime incarceration. However, criminologists report a lower murder rate in states without the death penalty and note the legal costs of imposing a death sentence as dwarfing what is spent for long-term imprisonment. Those against the death penalty regard it as an archaic practice, rooted in primitive vengeance and out of step with the advances of modern jurisprudence. They further note that, as one of the last industrialized nations still clinging to the death penalty, the United States is in league with China, Saudi Arabia, Iran, and Pakistan, which together are responsible for 88 percent of the world’s executions (according to Amnesty International), while 135 other nations, including members of the European Union, have abandoned the practice. It could be argued that the Supreme Court decision in Kennedy v. Louisiana (2008)—a 5–4 ruling that limits the death penalty to crimes involving loss of life, and excluding even the rape of an eight-year-old girl—indicates a subtle shift in American legal philosophy. A majority of Americans favor capital punishment, but the number has been slipping (65 percent in 2006 versus 80 percent in 1994, according to Gallup). As of 2008, thirty-six states plus the federal government (and the armed forces) had laws sanctioning capital punishment. 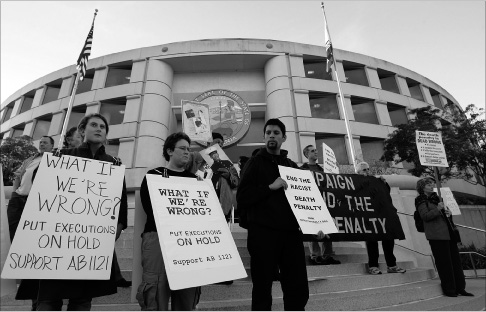 Opponents of the death penalty demonstrate against the execution of a prisoner in California in 2005. Capital punishment has remained one of the most contentious and enduring social issues in modern America. (Justin Sullivan/Getty Images)

The so-called modern era of capital punishment in the United States began with the 1977 execution of Gary Gilmore, who had robbed and murdered two people the previous year. His death by firing squad, the subject of Norman Mailer’s Pulitzer Prize–winning novel The Executioner’s Song (1979), was preceded by two landmark Supreme Court cases— Furman v. Georgia (1972) and Gregg v. Georgia (1976). The first decision, a 5–4 vote, overturned the death penalty on the grounds that its implementation was “freakish,” “random,” and therefore a violation of the prohibition against cruel and unusual punishment. The second decision, a 7–2 verdict, lifted the moratorium on executions following Furman, as a majority of the justices were convinced that the state of Georgia (along with others) had remedied the earlier constitutional concerns with corrective legislation. The Gregg decision explicitly ruled that capital punishment, if applied fairly, is not cruel and unusual but “an extreme sanction, suitable to the most extreme of crimes.” Some states, in an effort to avoid arbitrariness, automatically mandated the death penalty for certain crimes, an approach overruled by the high court in Woodson v. North Carolina (1976). From Gilmore’s death through February 2009, a total of 1,151 executions were carried out nationwide. A vast majority occurred in “red states,” including Texas (431), Virginia (103), Oklahoma (89), and Florida (67). Kansas, New Hampshire, and the armed forces did not carry out any executions during this period, despite having the legal authority. Most of the fourteen states that do not have the death penalty are “blue states.”

Questions of Fairness and Decency

The anti–death penalty movement has largely been represented by the American Civil Liberties Union (ACLU) and the National Coalition to Abolish the Death Penalty, the latter of which was founded in 1976 and is headquartered in Washington, D.C. These organizations have been joined by the National Association for the Advancement of Colored People (NAACP) Legal Defense Fund, which since the 1960s has made race an issue in the debate on capital punishment. Although African Americans constitute about 14 percent of the total U.S. population, they represented some 42 percent of the 3,263 individuals on “death row” in 2007. Of the total executions in the period 1976–2007, 34 percent were black. Supporters of the death penalty argue that race is not an issue if a person has in fact committed a capital crime; critics point to studies showing that blacks tried for murder are more likely to receive the death penalty than whites in the same legal situation. Statistics also Page 71  |  Top of Articleshow that cases involving white murder victims are more likely to result in the death penalty than those of black murder victims. This issue was considered in McCleskey v. Kemp (1987), with the plaintiff arguing that capital punishment is a violation of “equal protection under the law” as guaranteed by the Fourteenth Amendment. In that 5–4 decision, the majority of the high court determined there was no proof the jury in Georgia had exercised racial discrimination, even though that justice system was reportedly eleven times more likely to seek the death penalty in cases involving blacks.

Other controversies have focused on the moral culpability of offenders who are juveniles or mentally handicapped. In Supreme Court cases beginning with Thompson v. Oklahoma (1988) and Stanford v. Kentucky (1989), culminating with Roper v. Simmons (2005), it was ruled that executing a minor for a capital offense (or an adult for a capital offense committed when he or she was a minor) represents cruel and unusual punishment. The question of the mentally handicapped was brought to the fore with the Johnny Penry case, involving an individual who was found to be mentally retarded (mild to moderate) after his arrest for raping and murdering a woman in Texas in 1979. The Supreme Court ruled in Penry v. Lynaugh (1989) and again in Penry v. Johnson (2001) that mental retardation is a mitigating factor that must be taken into consideration in capital cases. Finally, in a similar case involving a 1996 robbery and murder in Virginia, the high court ruled 6–3 in Atkins v. Virginia (2002) that the execution of the mentally ill is unconstitutional because it culturally represents cruel and unusual punishment. While all of these cases involved a changing standard for what constitutes “decency,” many supporters of the death penalty believe that any person, whether minor or mentally handicapped, who is able to function well enough to take another person’s life ought to be made to face the full extent of the law.

A more recent debate on the topic of cruel and unusual punishment has focused attention on the most common method of carrying out executions: lethal injection. Critics maintain that death by lethal injection—which involves the intravenous administration of a series of toxic chemicals—is cruel because it paralyzes the body while that person is experiencing acute pain. They see this form of execution as on par with the electric chair, which also had originally been intended as a humanitarian and painless solution to carrying out the death penalty. In Bases v. Rees (2008), the Supreme Court ruled, 7–2, that lethal injection does not constitute cruel and unusual punishment, declaring that some pain, whether accidental or as part of the death process, is permissible.

Some people have turned against the death penalty because they have lost confidence in the justice system due to the many reports of wrongful convictions. In February 1997, the American Bar Association passed a resolution calling on states to desist from carrying out death sentences until ensuring that capital cases “are administered fairly and impartially” in order to “minimize the risk that innocent parties may be executed.” From 1973 to 2008, a total of 129 people had been released from death row after being acquitted, having charges against them dropped, or receiving a governor’s pardon based on newly discovered evidence. The average person experiencing a wrongful conviction spent nearly ten years in prison. In sixteen of these cases, DNA evidence brought exoneration. Most dramatically, in 2000, Illinois governor George Ryan cleared the state’s death row of 164 inmates and imposed a moratorium on executions, citing his concern about the state’s thirteen wrongful convictions. Prior to leaving office in 2003, Ryan commuted all the death sentences to life in prison. In the meantime, Congress passed the Justice For All Act of 2004, which contains a provision to expand post-conviction testing of DNA evidence to address the problem of wrongful convictions.