Indian education in the modern era shows the influence of two traditions, British and native Indian. Remnants of the British education system in the modern Indian system show the durability of British influence, but while independent India has preserved much of the British educational system, "national education," initiated by Indian nationalists and reformers in the latter half of the twentieth century, has left its own legacy. It seeks to revive the glorious heritage of knowledge and culture originating in India itself.

Ancient Indian civilization required an elaborate system of education for the transmission of its cultural heritage. Scriptures of great length were not written down; instead, the text was learned by heart. Each generation of Brahmans was thoroughly trained in this way. Sanskrit words had to be pronounced faultlessly, as mistakes were believed to cause spiritual harm. The main educational institution was the gurukul ("family of the teacher"), a term used in ancient and medieval times, but revived by Hindu reformers in the twentieth century. Students lived with the teacher for twelve to sixteen years, joining him as young boys and leaving him as young men ready to establish a household of their own. While the boys stayed in the gurukul, they had to observe chastity and lead a disciplined life.

This education was available only to the higher castes, and women and the lower classes were excluded. The teachers were mostly Brahmans. In addition to religious lore, the Brahmans transmitted worldly knowledge of law, political science, mathematics, astronomy, and medicine. Brahmans also invented the zero and introduced algebra, designed calendars, and even taught martial arts. Students specialized in such subjects and continued the tradition of their teacher. With the advent of Muslim invasions of India (beginning c. 1000 CE), schools devoted to the Page 18  |  Top of Article 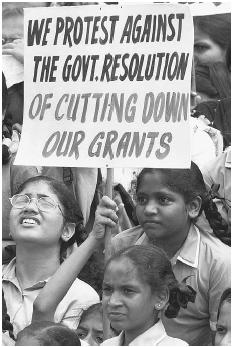 Indian schoolchildren and their parents in Mumbai in July 2001 protest a government decision to cut tuition grants for students attending English-language schools. (AFP/CORBIS)
Muslim tradition sprang up, and the Hindu and Muslim systems of education coexisted side by side for centuries. Interaction between the two systems of education was limited. Muslim schools taught the Qurʾan and texts on science and mathematics of Arab and Persian origin. Hindu schools reflected a variety of different traditions with their specific sacred texts and specializations in astrology, astronomy, mathematics, etc.

Indian Education under the British

Under British rule (from 1858) a new system of education was introduced in India; it too was not aimed at mass education. The highest educational institution became the college. Entrance qualifications often were obtained by means of private tuition. Wealth replaced caste distinction as the key to educational success, although Brahman families with little wealth still secured education for their sons, so as to get them positions in government service. The Hindus showed greater interest in British education than did the Muslims, who feared that it would affect their religion. Thomas Babington Macaulay, who served on the Supreme Council in India, wrote in his "Minute on Education" (1835) that the British should aim to educate gentlemen—Indian in blood only, British in every other respect. He also deprecated all Asian learning, although he knew little about it. At the time there was a debate in British circles in India on how to spend the limited funds available for Indian education. Those who wished to spend it on teaching of Arabic, Persian, and Sanskrit, etc. were called Orientalists; their adversaries, who favored English education, were termed Anglicists. Macaulay settled the debate in favor of the latter. Later generations of Indians, who knew more about English literature and philosophy than did the British, actually made Maucaulay's words come true to such an extent that the British felt threatened. Although British civil servants in India were selected after completing their studies at Oxford or Cambridge, they often could not match the English literary erudition of the most brilliant Indians.

In 1858 three universities were established in Mumbai (Bombay), Calcutta, and Madras as examining institutions. These universities were initially not teaching institutions; rather they determined the syllabi and curricula and controlled the examinations of affiliated colleges throughout India. This standardization produced large numbers of educated Indians imbued with the same ideas and values, and able to contribute to a common discourse.

Under the British administration in the nineteenth and early twentieth centuries, hundreds of primary, middle, and secondary schools were established. These schools were most commonly run by Christian missionaries, who received some financial support from the provincial government. The schools were important in teaching basic literacy and numeracy.

British higher institutions focused primarily on the liberal arts, law, and medicine, with little emphasis on engineering and technology. The Victoria Jubilee Institute in Mumbai, which trained Indian spinning and weaving masters for the cotton textile industry, and a school of civil engineering at Roorkee in northern India were the only exceptions. When the great industrialist Jamsetji Nasarwanji Tata (1839–1904) donated a large sum of money for the establishment in 1907 of the Indian Institute of Science in Bangalore, the British did not take kindly to the idea, believing that no one would want to employ Indian scientists. Because of the obstacles to its founding, the institute came into being only after Tata's death. It was a testament to Tata's vision, but India had very few wealthy visionaries of this kind.

There were several attempts to set up national institutions of education in the twentieth century, for example, Gurukul Kangri at Haridwar and the university set up at Shantiniketan by poet and Nobel laureate Rabindranath Tagore (1861–1941). There were many varieties of "national education" that focused on indigenous rather than English traditions. For example, Gurukul Kangri intended to revive ancient Indian education by teaching Sanskrit texts whereas at Shantiniketan the emphasis was on contemporary Indian literature and art. Mohandas Gandhi sponsored a scheme of basic education closely linked to his idea of constructive work in villages. But such institutions had a basic flaw—they did not confer degrees recognized by the government and, thus, could not help people to find employment.

Independent India preserved the British educational heritage. No attempts were made to revive the initiatives of "national education." Shantiniketan survived as a central university, with government funding. The only new departure was a proliferation of engineering colleges, including the five Indian Institutes of Technology (IIT), one each in Chennai (Madras), Kanpur, Kharagpur, Mumbai (Bombay), and New Delhi. These elite institutions select their students from hundreds of thousands of applicants. Their graduates are highly qualified—about 50 percent of each class secures a job in the United States. Many of those who remain in India acquire an additional Master of Business Administration degree (MBA) so as to qualify for administrative posts in the private corporate sector, which are better paid than those in production or research and development. Management positions were more attractive because until the end of the twentieth century, Indian industry mostly worked with imported technology and therefore invested very little in research and development.

The most neglected sector of education is still primary schooling. Official statistics show about one hundred million pupils in primary schools, but there are high dropout rates. Approximately half of the population of India is illiterate. There are frequent complaints that village schoolmasters take their jobs as sinecures and therefore do not teach regularly. This deficiency at the primary level has had serious consequences. At the end of the twentieth century, suicides occurred among peasants grieving crop losses in southern India. Not knowing to get the soil examined, they had shifted to cotton cultivation, although the soil was unsuitable. The fruition of Mohandas Gandhi's quest for combined primary and practical education at the village level is still unrealized.