The education system of Iran was patterned on the French system and evolved during the twentieth century to its present configuration. Although some preprimary schooling is available, the first educational cycle for most students is primary school (debestan) beginning at age five. This is followed by a three-year middle school (doreh-e rahanamaii) in which students are tested and evaluated for future educational tracking and at the end of which they receive a certificate of general education. Depending on their middle school experience, they may continue to a four-year intermediate school (dabirestan) whose diploma entitles them to proceed to college, to a two-year vocational school, to an agricultural secondary school that awards a trade certificate, or to a four-year technical secondary school that awards a terminal second-class technician's certificate. Women who have earned a diploma may enter a two-year normal school preparing primary teachers for rural areas. Higher education is furnished by universities offering bachelor's, master's, and doctor's degrees, institutes of technology, and one-year teacher training colleges.

Traditional education in Iran was for centuries conducted in maktabs, private schools conducted by Muslim clergy for boys aged seven to twelve. Located in every city and virtually every village, these free schools inculcated basic literacy in Persian and Qur'anic Arabic, as well as the fundamentals of arithmetic.

Almost as numerous were the madrasahs (religious schools) attached to the mosques. In these, older boys studied Arabic and Persian literature, the Qur'an, theology, philosophy, law, and other subjects suited to pursuing a religious vocation. The students who took advantage of these schools were almost always the children of the well-to-do. If their families wanted them to pursue an education broader or deeper than this curriculum provided, they were given tutors or sent abroad to study, many of them to Britain or France. In 1851, the first state-sponsored school appeared: the College of Science in Tehran, founded to provide higher studies in business, technology, and military science. Apart from some Western-style secondary schools under German, French, or English auspices, this was the only alternative to Islamic religious education until the end of the nineteenth century.

Twentieth-Century Education before the Islamic Revolution

In 1899, publicly supported elementary and secondary schools, most of them modeled after French institutions, were established in the major cities, and in 1911, the Ministry of Education was created to develop a national system of primary schools. By 1925, there were approximately 3,300 public schools enrolling over 100,000 students.

The modernization of Iran under the Pahlavi dynasty (1925–1979) demanded the creation of an educated secularized middle class with technological and commercial expertise. Although the education system was crucial to the effort, its expansion was relatively 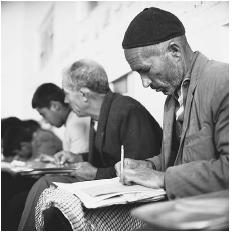 Older men attending a literacy class in Iran. (PAUL ALMASY/CORBIS)
Page 103  |  Top of Article slow. By the 1960s, Iranian schools offered five years of primary instruction and seven years of secondary, including both terminal and college preparatory curricula. Six universities, located in Tehran, Tabriz, Esfahan, Mashhad, Shiraz, and Ahvaz, enrolled about seventeen thousand students. To accelerate the pace of education reform, Iran created in 1963 a "knowledge corps" utilizing military inductees with secondary diplomas to teach villagers to read. When the dynasty fell in 1979, enrollment in elementary schools had reached three-quarters of the elementary-age group, but high school enrollment lagged behind at less than half of the secondary-age group.

Education after the Revolution

The 1979 revolution brought to power a government of ayatollahs (religious leaders) to whom educational secularization was anathema. They purged teachers and texts that were perceived to be antireligious and introduced religious coursework into the curriculum. The university students resisted, often violently, and so universities were closed for four years while their curricula and personnel were reorganized. They reopened with much smaller student bodies. Although the postrevolutionary government has acted to counter this impact, the situation remains difficult, the problems many. At the end of the twentieth century, education spending had reached nearly 6 trillion rials, which was about 6 percent of the gross national product (GNP) and 18 percent of government expenditure (as compared with about 500 million rials or 7.5 percent of the GNP and 16 percent of government expenditure in 1980). More than 3,300 preprimary schools enrolled nearly 200,000 children. About 92 percent of the boys of elementary school age and 87 percent of the girls—nearly 10 million students—attended school; 79 percent of the boys of secondary school age and 69 percent of the girls—over 7.5 million students—attended school. Teacher-student ratios were 1 to 32 at the elementary level and 1 to 30 at the secondary level. Yet adult literacy was a disappointing 72 percent, unevenly distributed among males (78 percent) and females (66 percent). In 1997, a cross-national program testing mathematics and science ranked Iranian students thirty-eighth of forty-one nations studied in eighth-grade math performance and thirty-seventh in eighth-grade science. It ranked Iranian students twenty-fifth of twenty-six nations studied in both fourth-grade math and science. At all education levels, fewer women than men are enrolled, a disparity that is fairly constant over time. Higher education has not bounced back from its purging and reorganization under the revolution. The nation's thirty general universities, thirty medical universities, twelve specialized universities, and two distance-learning universities enrolled only half a million students. This enrollment drop was caused largely because the secularized economic and political elites were sending their children to university abroad in increasing numbers in the 1980s, to the detriment of Iranian universities. As if this were not bad enough, the fraction of those studying abroad who elect not to return to Iran after their studies has constituted a serious brain drain that renders national development more difficult.