The modern education system in the Philippines has been strongly influenced by the colonial past and by a strong government lead in raising standards of education during the 1980s and 1990s. In terms of primary and secondary school enrollment, the Philippines traditionally was considered among the top countries in Southeast Asia. The country established a relatively strong education system to meet the demands of its young and rapidly growing population and of the rapidly growing national economy.

Education in the Sixteenth through Nineteenth Centuries

During the precolonial era, many Philippine traders used Arabic script in daily life, and some historical evidence suggests that many urban settlers could read and write. With Spanish colonization and the arrival of Spanish missionaries in the early sixteenth century, the education system in the Philippines developed under a strongly Spanish influence. Missionaries established and ran a number of religious schools, and in the early seventeenth century the first Western-style higher education institutions were established to meet the commercial and administrative needs of the colony. In 1611 the Spanish opened Santo Tomas College, which attained university status in 1644, becoming the oldest university in the Philippines and one of Page 500  |  Top of Article 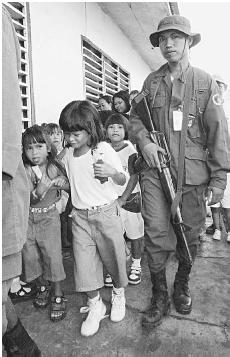 A police officer guards children at an elementary school in the southern Philippines in June 2000. Fighting between Muslim separatists and government forces have raised fears about the children's safety. (AFP/CORBIS)


the oldest in the region. During the Spanish era, however, education was a privilege of the upper class, rich individuals, and the nobility.

With U.S. occupation of the Philippines in 1899, the situation changed dramatically. In 1900 the new colonial administration introduced universal primary education, making the Philippines one of the first countries in Asia to adopt such an educational regime. This contributed to a rapid rise in the number of public and private primary schools as well as highereducation institutions. Importantly, the Philippines had more private higher institutions than public universities in the 1930s. According to various estimates, the literacy rate doubled, from around 25 to 30 percent at the beginning of the twentieth century to around 50 percent in the 1930s, but there was a huge regional disparity in school admissions, and the government was too slow to move toward eliminating mass illiteracy. World War II halted social and economic development in the Philippines archipelago, as it brought large-scale destruction during the Japanese occupation and the United States–led liberation of the country in 1945.

The Philippines became an independent republic in 1946, and the new government launched a series of national development plans in the field of education, with the target of total elimination of illiteracy in the country. Between 1946 and 2001, primary school enrollments rose from 4 million to 12.8 million, while secondary school enrollments rose from 0.5 to 5.4 million. By the late 1990s, more than 95 percent of primary school–age children were enrolled in public or private schools, and the Philippines became one of the highest-ranked nations in Asia in terms of school enrollments. The adult literacy rate reached 94.8 percent; it was even higher in the major urban areas of Luzon Island, but lower in many areas of Mindanao Island and the Eastern Visayan.

General primary education is mandatory and free, and citizens have the right to receive free tertiary education on a competitive basis. The Ministry of Education, Culture, and Sports regulates the national system of education and sets the national standards. Filipino and English are the two major languages of instruction, but the state provides support for education in the languages of other ethnic groups, including ethnic minority groups. The major problems in relation to providing quality education are the scattered nature of the Philippine archipelago; the presence of cultural minority (including Muslim) groups and small indigenous groups, speaking eight major Philippine languages and several minor languages; and the escalation of conflict in the southern Philippines in the late 1990s.

Primary and Secondary Education Presently, children at the age of six begin a four-year compulsory primary education program; for the first two years, the vernacular language used in the school's locality is the auxiliary medium of instruction, but only as a means of facilitating the students' understanding of concepts in either English or Filipino. At the age of ten, children enroll in a two-year intermediate education program, and at the age of twelve, they enter a four-year secondary education program. On completion of secondary school, pupils receive a high school diploma.Page 502  |  Top of Article There are several compulsory subjects, including English, Filipino, mathematics, practical arts, science, social studies, youth development training, and citizens' army training.

According to official figures, in 1997 there were 6,362 pre-primary educational establishments, attended by 452,000 children, with 9,644 teachers. Approximately 37,640 primary schools, with 342,000 teachers, provided education for 12 million pupils, and 5,880 secondary schools with 154,700 teachers provided education for approximately 5 million students. The official statistics state that the Philippines achieved 100 percent enrollment of relevant agegroup children at primary schools.

Tertiary Education After completing secondary school, students may continue their education at a non-university-level institution (i.e., technical or vocational) or at a university. As a prerequisite for university entry, secondary school graduates must take the National Secondary Aptitude Test. Most education programs at tertiary level are conducted in Filipino and English; students are required to take three courses in Filipino and three in English as part of the general education curriculum during their first two years. Students must study for four years and acquire between 120 and 190 credits to obtain a bachelor's degree.

Students may continue their education at a postgraduate level, but to do so they must achieve at least the score of 85 or a B grade at the bachelor's level. A master's degree takes between two and four years of study. Alternatively, students may undertake diploma or certificate courses of various durations. Upon completion of their master's degree, students may enter a three to four-year doctorate program, which combines course work and a dissertation.

Official figures for 1997 listed approximately sixty universities throughout the Philippines, both private and publicly owned, which were attended by approximately 260,000 students, and seventy-three private institutions, attended by approximately two million students. Private universities charge between $1,500 and $5,000 per academic year (1999–2000 academicyear estimates). Traditionally, a large number of middle-class and upper-middle-class families send their children to study at various universities abroad, with the United States and Canada the most popular destinations. However, many students (estimated at 12–18 percent) choose to remain in their host countries upon completing their education.

During the 1990s, there was serious concern about the quality of the education system in the Philippines and about regional disparities in educational services. There is a high percentage of dropouts from intermediate and secondary schools. Some problems were related to limited government expenditure on education. According to the United Nations Development Report (2000), between 1985 and 1997 the government significantly increased its expenditure on education—from 10,500 million to 100,000 million pesos (or from 1.94 percent to 4.0 percent of gross national product). However, this increase was offset by the rapidly growing population (36.87 percent of the population is below the age of fourteen, according to 2002 estimates) and by inflation.