John Donne (1572-1631), English metaphysical poet, Anglican divine, and pulpit orator, is ranked with Milton as one of the greatest English poets. He is also a supreme artist in sermons and devotional prose.

John Donne's masculine, ingenious style is characterized by abrupt openings, paradoxes, dislocations, argumentative structure, and "conceits"—images which yoke things seemingly unlike. These features in combination with his frequent dramatic or everyday speech rhythms, his tense syntax, and his tough eloquence were both a reaction against the smoothness of conventional Elizabethan poetry and an adaptation into English of European baroque and mannerist techniques. Since Donne's times such poetry has been unaptly called "metaphysical"—a term more appropriate for the philosophical verse of Lucretius.

Son of a prosperous ironmonger of Welsh ancestry, Donne was born between Jan. 4 and June 19, 1572, and was bred a Londoner and a Roman Catholic. His mother, a great niece of Sir (later St.) Thomas More, came from a cultured, devout family: her father, John Heywood, wrote interludes; her brother Jasper was a Jesuit; and her son Henry, John's brother, died in 1593 of a fever caught in Newgate Prison, where he was incarcerated for harboring a Roman Catholic priest. Donne's father died when John was 4, and his mother married a prominent physician.

After some years at Oxford (from 1584) and possibly Cambridge, Donne studied law at Lincoln's Inn (1592-1594) and became one of the first to write in English formal verse satires in the classical mode. It was also in the 1590s that he wrote many of his amatory poems. Most of them are dramatic monologues expressive of attitudes toward love, ranging from cynical fleshly realism to platonic idealism. It is sounder to see them not as autobiographical but as exposing the extremes of carnal and spiritual love and as putting in a favorable light love in which they are complementary. He also composed verse letters, elegies, epithalamia, and epigrams; they were published after his death as Songs and Sonnets.

Donne partook in the Earl of Essex's expeditions against the Spanish in Cadiz and the Azores in 1596-1597 and reflected this military experience in his poems "The Storm" and "The Calm." By 1597-1598, when he became secretary to Sir Thomas Egerton, the lord keeper, he had dissociated himself from Roman Catholicism. In 1601 he blasted the promise of a successful career by secretly marrying Lady 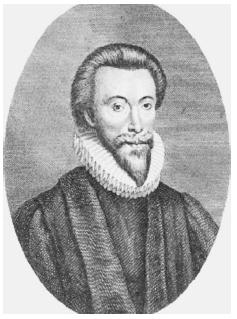 Page 61  |  Top of Article Egerton's niece, Ann More. He was dismissed from his post and temporarily imprisoned, and for about a decade he and his ever-increasing family were largely dependent on relatives and patrons.

During this middle period Donne wrote Biathanatos, a treatise on instances of justifiable suicide which may have been intended as a satire on casuistry; it was published by his son in 1646. His Pseudo-Martyr (1610) accused Roman Catholics of fostering false martyrdom for secular ends. Ignatius His Conclave (1611) was popular in both English and Latin versions: it brilliantly satirized the Jesuits but is interesting today because it reflects the then new astronomy of Galileo and toys with the notion of colonizing the moon.

Donne continued to write secular poems and, about 1609-1610, a powerful series of "Holy Sonnets," in which he meditated on sickness, death, sin, and the love of God. In 1611 he composed two companion poems, The Anniversaries, on the Idea of woman, the decay of the physical universe, the vanity of this world, and, in contrast, the permanence of God and spiritual values. These commemorated the death of little Elizabeth Drury and won him the patronage of her father, with whom Donne traveled to France and Germany. He briefly served as a member of Parliament in 1601 and again in 1614.

About 1606 Thomas Morton offered Donne a benefice if he would take Anglican orders. But it was not until 1615, after long pious and practical hesitations, that he was ordained a priest. Appointed a royal chaplain in the same year, he also received a doctor of divinity degree from Cambridge. In 1616-1622 he was reader in divinity at Lincoln's Inn, where he preached regularly. He was desolated in 1617 by the death of his wife: she had borne him 12 children, 5 of whom died. He preached frequently at court and in 1619 was an embassy chaplain in Germany. In 1621, on James I's nomination, he became dean of St. Paul's Cathedral, attracting huge congregations with his brilliant oratory. A serious illness in 1623 gave rise to his Devotions, those moving meditations on sickness, death, and salvation from which Ernest Hemingway derived the title For Whom the Bell Tolls.

On Feb. 25, 1631, Donne left his sickbed to preach his last and most famous sermon, "Death's Duel." On March 31 he died. An effigy of him wrapped in funeral shrouds which survived the burning of St. Paul's in the Great Fire of 1666 is preserved in the present cathedral, built by Sir Christopher Wren. The effigy is that of an old, seasoned man who has thought and suffered greatly but has achieved some peace of soul. His youthful portraits show black hair, clear skin, intense eyes, an ample brow, and a pointed, bearded chin. His later pictures reveal the same intensity and alertness.

Donne's was a complex personality, an unusual blend of passion, zeal, and brilliance; God and women were his favorite themes, but his subject matter otherwise ranged over the pagan and the pious, the familiar and the esoteric, the cynical and the sincere, the wittily bright and the theologically profound.

Largely because of Izaak Walton's charming but somewhat unreliable Life of Dr. John Donne (1681) and because of the risqué elements in Donne's secular poetry, a myth grew up contrasting a youthful Jack Donne the rake with a pious and repentant Dr. John Donne, Dean of St. Paul's. That in his younger days he was an attractive conversationalist, socialite, and courtier is undeniable, but his works reveal that he was always a serious student and a seeker after truth; and there is no sound evidence to support the myth. Certainly after his ordination he dedicated his remarkable genius wholeheartedly to the service of God and thus became one of the most brilliant stars in that hierarchy of extraordinary Anglican priests—among them, Robert Herrick, George Herbert, and Robert Burton—whose exceptional literary genius was dedicated to the glory of God and the welfare of man.

Biographies of Donne written before 1960 are unreliable. Robert C. Bald's definitive John Donne: A Life (1970) supersedes all previous biographies. The frequently reprinted work by Izaak Walton, Life of Dr. John Donne (many editions) should be read as great literature, more imaginative than accurate. Edward LeComte, Grace to a Witty Sinner: A Life of Donne (1964), is written for the general reader.