The fugitive slave Anthony Burns was born and reared in northern Virginia, where he taught himself to read and write, converted to the Baptist faith, and became a preacher to other slaves. From boyhood he was annually hired out and, during one such hire, accidentally broke his right hand. Although the break healed, Burns feared he would be sold south and put to some new kind of work that he would perform so poorly as to be mistreated. So he decided to escape. While hired as a stevedore on the Richmond docks, he enlisted the aid of a sailor who stowed him aboard his Boston-bound ship, but his owner learned of his whereabouts and federal marshals arrested him in Boston on May 24, 1854.

The arrest prompted Boston's Vigilance Committee to stage a mass protest meeting in Faneuil Hall that the abolitionists Wendell Phillips and Theodore Parker addressed. At its midpoint, some militants in the audience interrupted the proceedings to lead an armed attack to rescue Burns, who was being held in the nearby municipal courthouse. A biracial assault force of fourteen rioters failed to gain entry when the expected reinforcement from the Faneuil Hall audience did not back them, but during the struggle, they stabbed to death a specially deputized guard. The government later prosecuted the rioters and speakers Phillips and Parker for obstructing federal officers, but discontinued (nol-prossed) the case because of a defective indictment.

The next morning, Burns's owner, Colonel Charles F. Suttle, agreed to sell Burns to some Bostonians, whose leader, black minister Leonard A. Grimes, had raised the purchase money. The group would then free Burns. But United States Attorney Benjamin F. Hallett, citing the killingPage 366  |  Top of Article of the guard as justification, stopped the sale until after the case was decided. To guard the prisoner from any more rescue attempts, Hallett also assembled some 180 soldiers and marines and 120 armed civilians known as the "marshal's guard." Anticipating Burns's likely return, he persuaded the mayor with the suggestion of probable federal payment to call out approximately 1500 militiamen to keep the peace while the federal soldiery marched their prisoner to the wharf. President Franklin Pierce not only approved these actions but also sent to Boston the adjutant general to coordinate the regulars and militia and a U.S. revenue cutter to carry Burns back to Richmond, if necessary. The federal government paid the city $14,165.78 for their costs of an estimated $40,000 for the nine-day affair.

Although defense counsel Richard Henry Dana, Jr. emphasized the defects in the record, Judge Edward G. Loring, the commissioner appointed by the federal courts to decide fugitive slave cases, used Burns's replies to his master on the night of his arrest to identify him and issued the certificate for his removal. While church bells tolled dirges at Boston and throughout the state, an estimated 50,000 persons lined the one-third mile route to witness the rendition; later Burns quipped that "there was lots of folks to see a colored man walk through the streets."

Back in Virginia, Burns was punished with four months solitary confinement until sold. Luckily, Bostonians learned of his whereabouts and arranged to buy his freedom from his new owner, David McDaniel, who defied a southern mob to sell the notorious fugitive for $1,300 raised by Grimes. Now a freedman, Burns decided to study for the ministry and was helped by a benefactress to attend the Preparatory Department of Oberlin College intermittently from 1855 to 1862. He became pastor of a black Baptist church in Indianapolis, but soon left the state in part because of Indiana's racially discriminatory Black Laws. He moved to St. Catharines, Canada West (now Ontario), and became pastor of its fugitive slave community. There he died of tuberculosis in July 1862.

The coincidental timing of Burns's case, with the passage of the Kansas-Nebraska Act and the Sherman M. Booth fugitive slave rescue case earlier that year, contributed to the rise of antislavery parties throughout the North, including Massachusetts, where the secret American or Know-Nothing order was elected to office for the next three years. This nativist, antislavery party promptly disbanded all five Irish militia companies because of their participation in the rendition. Massachusetts joined seven other states in enacting new personal liberty laws that withdrew state support from fugitive slave rendition. The resentment against Commissioner Loring's decision resulted 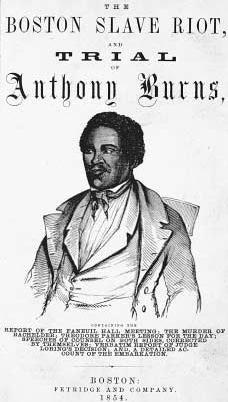 Cover of The Boston Slave Riot, and Trial of Anthony Burns, 1854. The account chronicles the efforts of an abolitionist mob to rescue Burns, an escaped slave and Baptist minister, from the hands of federal marshals at a Boston prison. Although he was returned to Virginia and punished with four months solitary confinement, Burns was eventually purchased and freed by a group from Boston. HULTON ARCHIVE/GETTY IMAGES

in social ostracism for Loring and the loss of his Harvard Law School professorship and state probate office. After Burns's rendition, no owner ever again chanced fugitive slave recovery in Boston.

Throughout his ordeal, Anthony Burns demonstrated his intelligence and resourcefulness, courage and humor, honesty and integrity. As the victimized protagonist, of the most dramatic and famous such case, he became "the fugitive." He originally had discouraged the legal defense urged on his behalf, telling his lawyer that he would farePage 367  |  Top of Article worse if he lost, for his master was "a malicious man if crossed." And so he was returned, punished, sold, and celebrated as "the Boston Lion."