Conquest. The Mongols were pastoral nomads who lived in a tribal society in Mongolia in the eleventh century. Superb horsemen and warriors, they frequently came into conflict with the Tatars, their neighbors to the West. When the Mongols began to develop an ethnic consciousness, Temujin exploited this political situation. In 1206 he claimed the title Genghis Khan (meaning “Universal Ruler” or “Khan from Ocean to Ocean”) and began to invade China in 1211. He died in 1227 during the campaign, and thereafter the Mongol Empire was divided between his sons and grandson. Kublai Khan, Genghis Khan’s grandson, becoming Great Khan in 1260, transferred the capital to Beijing in 1264 and adopted in 1271 a Chinese name, Yuan, as the title of his dynasty. When the last Song loyalists were defeated at sea in 1279, the Mongols became the first nomadic conquerors to rule all of China.

Adaptation. Under the influence of the Chinese, the Mongols carried out less-harsh policies toward the conquered people and began to adopt certain institutions of Chinese origin. Yelu Chucai, a descendant of the Khitan aristocracy, was the major designer of the Mongols’ conversion to Chinese administrative methods. He worked hard to fashion a centralized administration along Chinese lines but achieved only partial success. He divided China into large-scale and loosely controlled military commands that later evolved into the large provinces in the Ming dynasty (1368-1644). He freed Chinese scholars from captivity and appointed them as tutors to Mongol nobles. In 1229 postal relays were created for the first time, a system of property taxes was set up, and public granaries were built. Seven years later paper money was first issued, and translation offices were established in order to produce Mongol versions of the Chinese classics and official histories of the preceding dynasties. Meanwhile, Kublai Khan personally developed the pattern of Mongol rule over China, retaining many superficial characteristics of the Song administration, such as the secretariat and the six ministries and the traditional division between the civil, military, and censorial branches of government. He also incorporated Chinese court ceremonial and Confucian rites into his government.

Distrust. Although the Mongols adopted native institutions, they still did not trust former Chinese officials; a significant number of Muslims, many of whom came from Central Asia, occupied important government positions. Directing the state financial administration from 1262 until his death in 1282, the Muslim Ahmad played a prominent role in Kublai Khan’s reign. The Mongols occupied all posts of command, and the administration of the finances was given to men from the Islamic areas of Central Asia and the Middle East. Assisted by Mongol military detachments, Muslim merchants, grouped in associations, practically established a monopoly in the profitable business of collecting taxes.

Military Campaigns. Kublai Khan’s ambitions were not confined to China proper. He launched two military campaigns against Japan in 1274 and 1281, but both failed. By sending his fleets to invade Java in 1281 and 1292, he forced the natives into ritual submission but failed to expand the Yuan empire’s territory. In the meantime Kublai Khan and his successors concentrated on securing Mongolia. Despite their success on China’s inner Asian frontier, the Mongols failed to dominate Central Asia.

Collapse. The reasons for the collapse of the Yuan dynasty were many and were mutually related to each other: 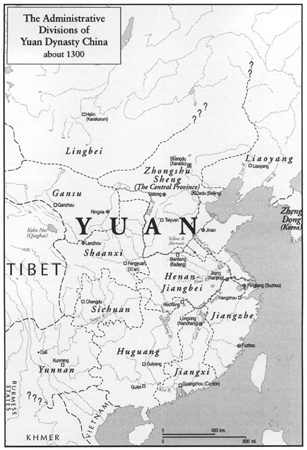 Map of China Proper at the height of the Mongol Empire (from F. W. Mote, Imperial China, 1999) 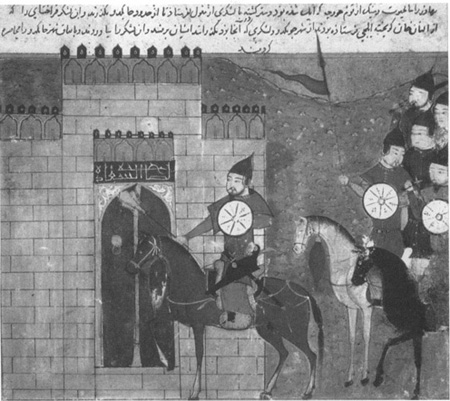 disorder in the government; greed of the Mongol and Muslim officials; skyrocketing inflation; corruption of the Tibetan monks who controlled all of the Chinese clergy and interfered in political affairs; the growing poverty of the peasantry; and rebellions in many provinces.

Military Weakness. After the conquest of China, the Mongols divided all the military forces into four parts: the Mongol army; associated nomadic army; Chinese and Qidan army from North China; and the Chinese army from the South. The first three armies were given lands and slaves. They were exempted from taxation and were required to be self-sustaining. This military system was created to repress internal disturbances. Since many slaves ran away, Mongol households could not cultivate their lands. In the 1290s there was impoverishment and a decline in military standards. By the 1340s many Mongol military households became poor and the garrison system began to collapse.

Government Weakness. Since the Mongols lacked a tradition of orderly succession to the throne, the Yuan dynasty had begun to weaken by the fourteenth century. In only forty years after Kublai Khan’s death, several emperors came to the throne through violent means. Rulers succeeded each other rapidly in the midst of internal troubles, plots, and usurpations. There were four emperors between the years 1320 and 1329 alone. Great ministers and high officials were the masters in the capital, and local authorities, who became more and more corrupt, acted as they wanted. 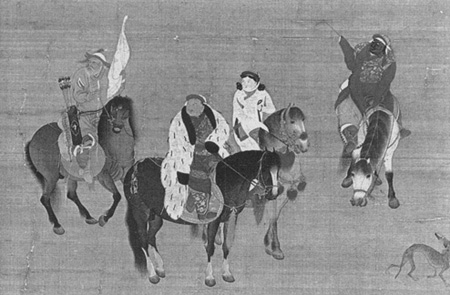 disappointed with the Yuan policy of military supremacy over civilian authority.

Yellow River Problem. The Yellow River broke through its dikes, flooded, and began to change its course in the 1340s. One part of the river flowed North to the Shandong Peninsula, while another branch emptied into the Grand Canal. This change resulted in great dislocation and suffering for the inhabitants of the affected areas and threatened the economic survival of the court by interrupting shipments of grain from the South to Beijing. The central government had to reestablish control over the river or over the sea route. In doing so, under the direction of a Chinese engineer, the dynasty employed 150,000 civilians and 20,000 troops. The Yellow River problem was solved, but the cost was high, exhausting the state financial resources. The consequence was great inflation, which added its toll to the hardship of the peasants already suffering from government exactions.

Downfall. Along with the flooding of the Yellow River, other crises emerged in the 1340s. Peasant revolts flared up in the countryside, and pirates threatened the shipment of grain to the capital by sea. In 1351 the emperor called upon Toghto, an experienced professional who had previously served as chancellor. After returning to office, Toghto carried out new policies to increase revenue, control the floods, and put down the rebels. He at first was successful in handling the situation. He began a great project, employing thousands of peasants as laborers, to reopen the Grand Canal, which had silted up. Yet, his project aroused a new and greater rebellion. In 1355, under pressure from Chancellor Toghto’s opponents, the emperor removed him, and his dismissal marked the end of the Yuan dynasty. Thereafter, the emperor controlled only the capital and the surrounding regions, while other parts of the empire were held by independent commanders. As the insurrection grew, a civil war broke out among the Yuan supporters. In 1368 the court fled to Manchuria, and the Yuan dynasty finally collapsed.

White Lotus Society. The deteriorating situation incited people to look for religious salvation. Although the imperial government forbade and persecuted secret societies, they continued to spring up. Some of these organizations were more obviously religious than political in their aims. The White Lotus Society, a sect dedicated to the worship of the Buddha Amitabha, was founded in the twelfth century. The teachings of the White Lotus Society appealed to many people placing their faith in the coming of Maitreya (Mi-le), the redemptive Bodhisattva, who would end all suffering and injustice in society. Led by someone who claimed descent from the Song imperial line, the society attracted the miserable: dismissed clerks, laborers from the Yellow River project, peddlers, outlaws, the idle, and the displaced, who believed in the imminent restoration of the Song dynasty (960-1279). It also appealed to many poor peasants who hated to pay heavy taxes or to carry out compulsory labor.

Red Turbans. Another important secret organization was the Red Turbans, so called for the headdress adopted by its members. These people once revolted during the Song period and turned to open rebellion again in 1352. The Yuan court, under Toghto’s leadership, was determined to put down this challenge, but the Red Turbans evaded the Page 265  |  Top of ArticleMongol armies and established a special base in Sichuan, an isolated province that had a tradition of semi-independence.

Debate. Traditional interpretations of the downfall of the Yuan dynasty emphasize the persistent Chinese hatred of the Mongols who failed to modify their rule to meet Chinese expectations. It was therefore only a matter of time until a combination of dynastic decline and rebellion would bring an end to the dynasty. In recent years scholars pro-posed a rather different explanation: a series of disastrous events occurring between the 1350s and 1360s ruined the empire, even though, under Kublai Khan and his immediate successors, the Mongols devised an effective and acceptable means of ruling the Chinese. In other words, Mongol rule might have lasted much longer without these events.