In 1591 the Songhai Empire of West Africa is defeated by the Moroccan Saadi Empire, which captures and sacks the Songhai city of Timbuktu and the capital, Gao.

Dominicus Corea (1565–1596), king of Kotte and Sitawaka in present-day Sri Lanka, is executed by the Portuguese for rebelling against their control in 1596.

In 1598 Martín García Óñez de Loyola (1549–1598), Spanish governor of Chile, is attacked and killed by Mapuche cavalry in the Battle of Curalaba. His death sparks revolt across Chile, leading to the end of European influence there until the late nineteenth century.

Giordano Bruno (1548–1600), an Italian Dominican friar and scientist who theorized that the sun is merely a star and that there are many stars in the universe, is found guilty of heresy for these beliefs and burned at the stake in Rome in 1600.

The Choson Dynasty was a long-standing kingdom on the Korean Peninsula. Founded in 1392 after the overthrow of the Goryeo Dynasty, the Choson Dynasty lasted until 1897. During the late sixteenth to the seventeenth century, the Choson Dynasty experienced extreme threats from its neighbors, including the Jurchens from Manchuria; the Japanese to the east; and later, the Qing Dynasty of China.

Before the fall of China's Ming Dynasty in 1644, the Choson and Ming dynasties experienced close relationships, both political and economic. Both dynasties had emerged after the Mongol powers lost most of their control of Asia in the fourteenth century. The Choson paid tribute to the larger Ming Dynasty. In addition, these dynasties faced common threats from the Jurchens and the Japanese.

The Japanese threat to the Choson materialized in the form of Toyotomi Hideyoshi (1536–1598). During the mid-sixteenth century, Hideyoshi, a man of lowly birth, had joined the Oda clan. He rose to the rank of general with hard work and his keen negotiation skills. Under Oda Nobunaga (1534–1582), a powerful clan leader, Hideyoshi gained much political and military influence. After Oda's death, Hideyoshi began to consolidate his power by conquering Japanese provinces and insinuating his entrance into the Japanese imperial court.

Hideyoshi also sought to establish diplomatic and economic relationships with Japan's neighboring powers, the Choson and Ming. Both dynasties refused: The Choson Dynasty did so on the grounds that it was already a tributary state to China; the Ming Dynasty rejected Hideyoshi's offer because viewing Japan as an equal was an insult. Rejected by the two dynasties, Hideyoshi prepared an invasion force with the goal of conquering both the Choson and Ming dynasties. Hideyoshi sent out his force of more than 150,000 men in 1592.

Despite news of the Japanese invasion force amassed by Hideyoshi, many Choson military leaders were skeptical of a war with Japan. Some assumed that Hideyoshi merely wanted passage through Korea to Ming China, but Admiral Yi Sun-shin (1545–1598) believed that the Choson military should be prepared. Yi began developing stronger fortifications and implementing more discipline among his troops. He also began designing the Turtle Ship.

Turtle Ships proved extremely effective in naval engagements. Typically, they held crews of fifty to sixty sailors and marines. On each side, there were ten slots for oars and twelve cannon portholes. The bow of the ship was headed by the infamous dragon head, which was sometimes fitted with cannon, an incendiary device, or the capability to emit poisonous or screening smoke. One of the unique and distinguishing features of the Turtle Ship was that it had a covered deck to protect its crew from arrows, guns, and incendiary attacks. Some historical accounts argue that the cover was ironclad, although there is insufficient evidence to support this assertion. However, it is certain that the covering was fortified with iron spikes to discourage the enemy from boarding.

The Turtle Ships were heavily fortified, fast, and maneuverable. The ability to turn on its own radius allowed the Turtle Ship to move directly into its enemies for attack. This strategy was developed by Yi. Deploying no more than five Turtle Ships in a battle, he would use them to move among the enemy and ram or attack broadside with cannon.

In May 1592 the Japanese invasion force landed its first troops in Korea. Hideyoshi's initial invasion force was successful in taking all of central and southern Choson in a series of minor battles. His forces captured the capital city, Seoul, and turned northward. To sustain his invasion efforts and continue on to Ming China, however, Hideyoshi needed to maintain control of the seas, specifically the Korea Strait between Korea and Japan.

In June 1592 Yi set off to engage the Japanese in naval combat. Taking eighty-five ships into battle, Yi destroyed forty-two Japanese vessels, suffering no losses. In August of the same year, Yi added the readied Turtle Ships to his fleet and continued the offensive naval engagements. During that summer and fall, Yi successfully sank or took 375 Japanese ships. These successes were due to the naval genius of Yi and the fact that Japanese ships were far less advanced than their Korean counterparts.

Yi's early victories forced the Japanese navy to reconsider its engagement strategies. Open sea battle was to be avoided, because of the fierce maneuvering capabilities of the Korean navy on open sea. Yi's efforts greatly affected the land conflict as well. By guarding the west coast of Korea and his own fortifications, Yi was able to protect the northern cities and the major production of rice.

After Yi's initial victories, the Choson Dynasty called on its Ming allies for assistance. In 1593 the combined Chinese and Korean forces pushed the Japanese military back to the coast. The war had reached a stalemate with the Koreans unable to force the Japanese troops out. Hideyoshi wanted to Page 215  |  Top of Article eliminate Yi. The Japanese attempted to lure Yi into a trap by leaking false information to the Choson leaders. Yi recognized the bait, and when ordered to follow up on this false information, he refused. This refusal resulted in his dismissal from duty for insubordination in 1596. 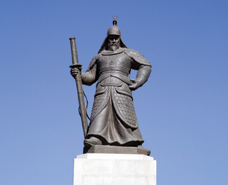 In 1597 Yi's replacement, Admiral Won Gyun (1540–1597), and the Choson fleet entered into battle with the Japanese navy. Won was defeated and died during the battle. Yi was reinstated as commander of the navy. Yi took twelve ships and continued his offensive strategy. He brought his small force within sight of the Japanese fleet of 133 ships and lured the Japanese into the narrow Myeongnyang Strait. He sank thirty-one Japanese vessels there with no losses on his side.

Chinese reinforcements continued to come to the aid of the Choson Dynasty. In 1598 Chinese admiral Chen Lin (1543–1607) combined his forces with Yi. Hideyoshi died that year and upon his deathbed ordered all troops to return home. Most troops were able to leave the coastal strongholds, but some could not leave and were going to face a strong naval resistance from Chen and Yi. The Japanese navy came to the rescue of these troops and engaged in one last naval battle. Both sides sustained heavy losses—Japan lost two hundred ships. China and Choson both lost many ships, and they also lost Yi. He was struck in the neck by a bullet and died in December 1598. This final battle marked the end of the Japanese invasion efforts of Choson.

Yi's successes prevented the Choson Dynasty from falling to the Japanese. After the Japanese invasion, the Korean Peninsula was left greatly weakened. Jurchen tribes from Manchuria, under the leadership of Nurhachi (1559–1626), carried out numerous attacks on Choson Korea. Nurhachi was simultaneously carrying out raids on northern Ming China.

Choson became a tributary state to the Qing Dynasty. Diplomatic relations remained strained, and the Choson Dynasty became increasingly isolationist. Korea later developed into a hermit kingdom, or a state that willingly cuts itself off from the rest of the world. This tradition continued in the early 2000s in present-day North Korea.

Yi's innovations did not persist after his death. Although his Turtle Ships became legend, such armored ships did not appear again until the nineteenth century with the emergence of ironclad warships by both the British and U.S. navies. Yi himself became a Korean hero who continued to be celebrated and commemorated.