Demographics is the study of the characteristics of human populations, such as population size, growth, and decline; vital statistics; and spatial distribution. Although humans have long been interested in population growth and change, the origin of demography is attributed to work that came out of England during the mid-1600s. John Graunt (1620–1674) is considered to be the founder of demography, and his Natural and Political Observations Made upon the Bills of Mortality (1662) represented the first major effort to systematically analyze trends in mortality in England during the 17th century (Rowland, 2006). A successful merchant, Graunt studied data published by church parishes regarding deaths in London due to plague outbreaks and other causes and used these data to categorize mortality differences across age, gender, and space.

From these beginnings demography evolved to being a valued and essential social science. Demographers can be found in most countries of the world and their analyses of population characteristics and trends are of use to all sectors. Public-sector actors use the work of demographers to plan for needed infrastructure investments or public service expansions and to understand patterns of growth in decline. Private firms use demographic analyses to determine the demand for their products and assess changing market conditions. Lastly, nonprofit groups use demographic data to advocate for a wide range of issues, such as immigration policy reform, health care investments, and educational initiatives aimed at lowering birth rates and combating disease in developing countries.

Fundamental to an understanding of demography is the concept of vital statistics, which are data on key life events for populations, including birth, death, and Page 204  |  Top of Articlefamily changes, such as marriages, civic unions, and divorces (Smith, Tayman, & Swanson, 2001). In most countries of the world the national government collects and tracks data on these life events and makes these data available for review and analysis. In particular, information on deaths is invaluable to public health professionals, health researchers, and public policy analysts because it can be used to target policy and resources to combat health threats or evaluate the effectiveness of policy interventions.

A second key concept for understanding population and population change is the demographic balancing equation, which summarizes the ways a population can change. This equation is often represented as follows: 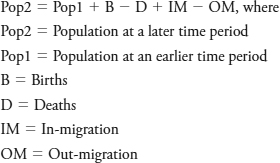 The interplay of fertility and mortality are central to a core theory that has been determined to be useful for understanding population change over time in both the developed and developing world: demographic transition theory. This theory holds that over time human populations within a society transition from a period of high birth and death rates to a period of low birth and death rates. In the pretransition there are high birth rates in the population yielding large household sizes, in part because people die at younger ages and life expectancy is lower. Industrialization, modernization, and urbanization have combined to yield improvements in health care, water and sewerage systems, and food security, all contributing to lower mortality rates and longer life expectancies. In response, societies typically experience a lagged, but similar decline in birth rates that eventually result in much smaller household sizes and fewer births per woman on average. For example, the average household size in the United States in 1900 was 4.6 people, but this metric fell to 2.6 people per household by 2010.

Beyond cementing the understanding of attributes of populations and tracking population changes over time, demographers have also provided insight into major trends that have shaped and will continue to shape the planet over the next century. These trends will have huge impacts on resource needs, changing economic markets, public policy initiatives, and development patterns in urban and rural areas.

A major contributor to massive global population growth has been the rise in life expectancy for the human population. A combination of improvements in health care and vaccination against disease, infrastructure investments that have improved sanitation, and technology that enhances safety have seen worldwide life expectancies more than double between 1900 and 2000, and many countries have reached life expectancies of 80+ years for their populations (Central Intelligence Agency, 2013). Life expectancies are generally longer for women in almost all countries, in large part because males have greater rates of high-risk behaviors (drinking, drug use, and use of guns) and typically work in more dangerous work environments.

Concurrent with this rise in population has been a trend toward urbanization. Countries in the developed world have long been urbanized, with a majority of residents living in central cities and their suburbs and not in rural settings. Within the last several decades though, this urbanization trend has taken root in the developing world as well. Large cities in Africa, Asia, Central America, and South America have seen their urban populations grow immensely in the last few decades, bringing challenges related to land ownership, employment opportunities, potable water availability, and squatter settlements to places such as Mexico City, Mexico; Jakarta, Indonesia; Mumbai, India; and Lagos, Nigeria. By 2009 it was estimated that for the first time in Page 205  |  Top of Articlehistory more humans were living in urban settings than in rural settings, making Earth an urban planet (United Nations, 2009).

Another prominent international demographic trend is the diversification of national populations around the globe, a trend that is particularly pronounced in Europe, South America, the United States, and Australia. This trend has been labeled a “diversity explosion,” and these changes are bringing both opportunities and challenges to the countries that are experiencing them (Frey, 2014). In many countries the flow of international immigrants from the developing world provides low-cost labor to markets, but it can also cause friction when natives clash with newcomers due to language or cultural differences and competition for employment.

There is another pronounced trend in many developed countries such as Germany, Japan, Spain, and the United States. Because of a massive international baby boom during the post–World War II era there was a wave of older residents that began entering their elderly years (aged 65 years and older) in 2010. This phenomenon is known alternatively as the Baby Boom, the Silver Tsunami, or the Grey Wave. In several of these countries the large older population and lower birth rates have combined to yield a trend toward natural decrease, where the native-born population is in decline because of a greater number of deaths than births. In some of these countries population growth is driven entirely by international migration and much higher birth rates among the immigrant populations.

Taken as a whole, these trends point to a future in which the human population will continue to grow and centralize in urban centers. Within many countries the combination of older native-born populations and increased international migration will yield greater racial, ethnic, and cultural diversity, as well as conflict between natives and immigrants. In the developing world large urban centers will continue to grow and the existing urban and natural systems will be stressed further by this ongoing influx of immigrants, many of whom will arrive with little wealth, rural-oriented skill sets, and limited local connections.

The field of demographics has provided clear signals of this complex, diverse, and fascinating future and helps emphasize the need for international policy and privatesector initiatives to address concerns over food security, climate change and sea level rise, and opportunity for all the world's citizens. The field's humble beginnings in understanding patterns of mortality in London have grown over the centuries into a core social science, one that is fundamental to growing economies, protecting the environment, and promoting an improved quality of life for all.