A landlocked nation of 252,000 square miles in South Asia with a population in 1950 of some 8.2 million people. Afghanistan borders Iran to the west; Turkmenistan, Uzbekistan, and Tajikistan to the north; China to the northeast; and Pakistan to the east and south. This geographically forbidding nation, almost half of which is more than 6,500 feet in elevation, with extensive desert regions and mountains exceeding 16,000 feet, is no stranger to international intrigue.

Afghanistan became a center of the so-called Great Game, an imperialist rivalry between Britain and Russia, in the nineteenth century. The struggle Page 60  |  Top of Articleended before the turn of the century, however, with the establishment of an independent Afghanistan that divided the regional ethnic groups in the area between Russia, British India, and Afghanistan. As elsewhere in the world, artificial borders mandated by European empires left residual problems that festered throughout the twentieth century.

After 1933, Afghanistan's King Muhammad Zahir had tried to enhance his position by dealing with the Soviets as a counter to the British in India. After World War II, the United States displaced Britain as the Western force in Asia, and Afghanistan continued to court the Soviets as a counter to Western imperialism. An agreement with the Soviets in 1950 provided Afghanistan with substantial economic support and promises of oil shipments, albeit interrupted by disputes over the Pashtun border with Pakistan.

At the time, proponents of containment envisioned an interlocking system of alliances to surround the communist world. NATO was the first in 1949 to secure Western Europe. In 1954 CENTO and SEATO surrounded the southern and eastern flanks of the communist bloc. Never fully realized, the idea was to link the three through multilateral collective security guarantees. CENTO included Pakistan, Iran, Iraq, and the linchpin Turkey, which was also a part of NATO. Pakistan was also a member of SEATO and thus tied to NATO through Turkey. Afghanistan was not included in any of these mechanisms.

In 1953 Mohammad Daoud Khan, a member of the Afghan royal family, became prime minister. Daoud secured a Soviet economic development loan of $3 million in 1954 that preceded a 1955 visit by Soviet leaders Nikita Khrushchev and Nikolai Bulganin, who promised another $100 million. The United States refused military aid to Afghanistan but did assist in improving the Qandahar Airport. The Soviets then promised military aid and a military aircraft facility at Mazir-e-Sharif. For a time, it seemed that Afghanistan was the fortunate beneficiary of Cold War rivalries.

Daoud's tenure ended in 1963 when Zahir resumed direct rule. The details of Daoud's fall are not entirely clear, although several factors were involved including inflation, continued tensions with Pakistan, popular opposition to Daoud's secular government, and the king's desire to broaden participation in government. The king ruled directly for a decade, during which time a leftist political opposition movement gained momentum, led by Babrak Karmal of the People's Democratic Party of Afghanistan (PDA). Political unrest and a severe drought resulted in a military coup in 1973 that placed Daoud back in power, now as head of a republic with support from Karmal.Page 61  |  Top of ArticleDaoud, a moderate leftist, surprised many by seeking U.S. financial aid through the shah of Iran. The Soviets were also providing aid; Daoud visited the Soviet Union in 1974 and again in 1977.

Daoud continued to play both superpowers against each other and in the meantime developed closer ties with Iran and Saudi Arabia. By 1978, Daoud lost Karmal's support on the Left and the Islamist fundamentalists’ support on the Right. That same year, Daoud's government was overthrown. Karmal and Nur Muhammad Taraki now led a new government with strong ties to the Soviets. The two Afghan leaders soon split, however, and in 1979 the Soviet Union sent troops to support Karmal. 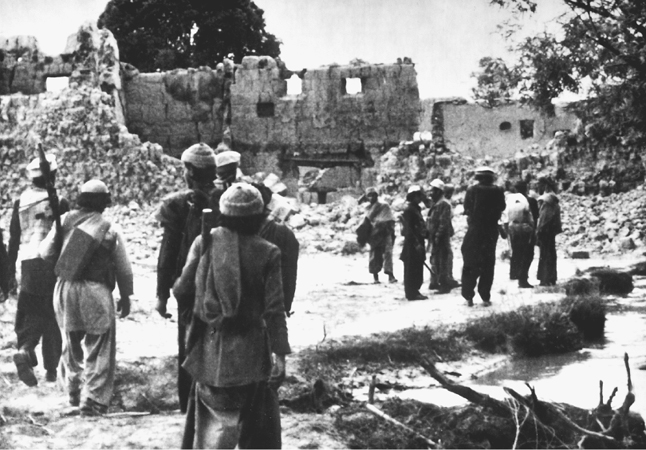 Afghan resistance fighters return to a village that has been destroyed by Soviet forces, 25 March 1986. (U.S. Department of Defense)

Meanwhile, local tribal leaders took advantage of the turmoil, as did Islamic fundamentalists who feared that Soviet rule would result in a wholly secular regime. This dynamic forced the Soviets to back Karmal's regime with 150,000 troops and massive military aid. Sensing Soviet vulnerability, the United States provided arms and covert aid to the Afghan mujahideen (guerrilla insurrectionists). The parallel to Vietnam is not without merit. In Vietnam the communist power provided sufficient aid to the North Vietnamese and their Viet Cong allies to keep the United States bogged down in Page 62  |  Top of Articlea protracted struggle until 1973. In Afghanistan, the United States supplied aid to keep the Soviets pinned down until 1989, when they gave up and withdrew.

In neither case was the outcome predictable, however. The North Vietnamese united Vietnam but then gradually moved closer to the United States. Afghanistan was plunged into a long civil war that ended in 1996 when the repressive Taliban regime came to power, cultivating ties to the terrorist al-Qaeda movement. Ironically, the Taliban and al-Qaeda had received training and arms from the United States during the Afghanistan War. Ultimately, Afghanistan became a tragic victim of the Cold War, with implications that went far beyond the end of the Cold War in 1991.