War that destroyed the U.S.-Soviet détente of the 1970s; inaugurated a new, dangerous stage in the Cold War; and badly weakened the Soviet military and economic establishments. The Soviet-Afghan War represented the culmination of events dating to April 1978, when Afghan communists, supported by left-wing army leaders, overthrew the unpopular, authoritarian government of Mohammad Daoud and proclaimed the People's Democratic Republic of Afghanistan. Although the extent of Soviet involvement in the coup remains unclear, Moscow certainly welcomed it and quickly established close relations with the new regime headed by Nur Mohammad Taraki, who was committed to bringing socialism to Afghanistan.

With the ambitious, extremely militant foreign minister Hafizullah Amin as its driving force, the Taraki regime quickly alienated much of Afghanistan's population by conducting a terror campaign against its opponents and introducing a series of social and economic reforms at odds with the religious and cultural norms of the country's highly conservative, Muslim, tribal society. Afghanistan's Muslim leaders soon declared a jihad against “godless communism,” and by August 1978 the Taraki regime faced an open revolt, a situation made especially dangerous by the defection of a portion of the army to the rebel cause. 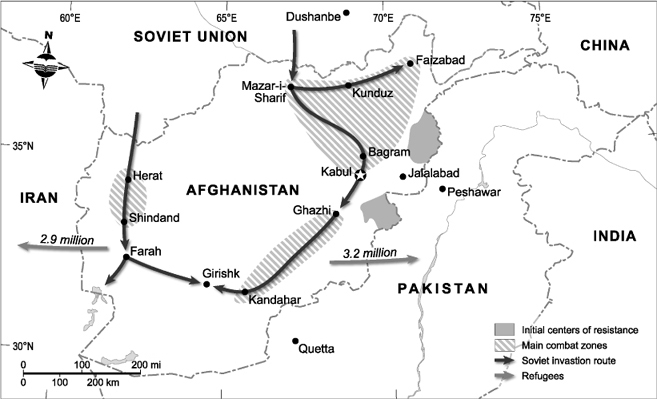 As Afghanistan descended into civil war, Moscow grew increasingly concerned. Committed to preventing the overthrow of a friendly, neighboring communist government and fearful of the effects that a potential Islamic fundamentalist regime might have on the Muslim population of Soviet Central Asia, specifically those in the republics bordering Afghanistan, the Soviets moved toward military intervention. During the last months of 1979, the Leonid Brezhnev government dispatched approximately 4,500 combat advisors to assist the Afghan communist regime while simultaneously allowing Soviet aircraft to conduct bombing raids against rebel positions. Although Soviet Deputy Defense Minster Ivan G. Pavlovskii, who had played an important role in the 1968 Soviet invasion of Czechoslovakia, counseled against full-scale intervention in Afghanistan, his superior, Defense Minister Dmitry Ustinov, convinced Brezhnev to undertake an invasion, arguing that only such action could preserve the Afghan communist regime. He also promised that the Soviet presence there would be short.

Brezhnev ultimately decided in favor of war, the pivotal factor arguably being the September 1979 seizure of power by Hafizullah Amin, who had ordered Taraki arrested and murdered. Apparently shocked by Amin's act of supreme betrayal and inclined to believe that only a massive intervention could save the situation, Brezhnev gave approval for the invasion. Beginning in late November 1979 and continuing during the first weeks of December, the Soviet military concentrated the Fortieth Army, composed primarily of Page 64  |  Top of ArticleCentral Asian troops, along the Afghan border. On 24 December, Soviet forces crossed the frontier, while Moscow claimed that the Afghan government had requested help against an unnamed outside threat. 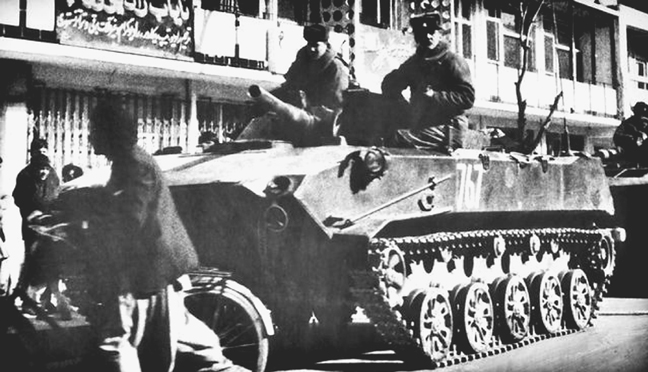 Relying on mechanized tactics and close air support, Soviet units quickly seized the Afghan capital of Kabul. In the process, a special assault force stormed the presidential palace and killed Amin, replacing him with the more moderate Barak Kemal, who attempted, unsuccessfully, to win popular support by portraying himself as a devoted Muslim and Afghan nationalist. Soviet forces, numbering at least 50,000 men by the end of January 1980, went on to occupy the other major Afghan cities and secured major highways. In response, rebel mujahideen forces resorted to guerrilla warfare, their primary goal being to avoid defeat in the hopes of outlasting Soviet intervention.

Moscow's invasion of Afghanistan had immediate and adverse international consequences, effectively wrecking détente that was already in dire straits by December 1979 thanks to recent increases in missile deployments in Europe. Having devoted much effort to improving relations with Moscow, U.S. President Jimmy Carter believed that he had been betrayed. He reacted swiftly and strongly to the Afghan invasion.

On 28 December 1979, Carter publicly denounced the Soviet action as a “blatant violation of accepted international rules of behavior.” Three days later, he accused Moscow of lying about its motives for intervening and declared that the invasion had dramatically altered his view of the Soviet Union's foreign policy goals. On 3 January 1980, the president asked the U.S.Page 65  |  Top of ArticleSenate to delay consideration of SALT II. Finally, on 23 January, in his State of the Union Address, Carter warned that the Soviet action in Afghanistan posed a potentially serious threat to world peace because control of Afghanistan would put Moscow in a position to dominate the strategic Persian Gulf and thus interdict at will the flow of Middle East oil.

The president followed these pronouncements by enunciating what soon became known as the Carter Doctrine, declaring that any effort to dominate the Persian Gulf would be interpreted as an attack on American interests that would be rebuffed by force if necessary. Carter also announced his intention to limit the sale of technology and agricultural products to the USSR, and he imposed restrictions on Soviet fishing privileges in U.S. waters. In addition, he notified the International Olympic Committee that in light of the Soviet invasion of Afghanistan, neither he nor the American public would support sending a U.S. team to the 1980 Moscow Summer Games. The president called upon America's allies to follow suit.

Carter also asked Congress to support increased defense spending and registration for the draft, pushed for the creation of a Rapid Deployment Force that could intervene in the Persian Gulf or other areas threatened by Soviet expansionism, offered increased military aid to Pakistan, moved to enhance ties with the People's Republic of China (PRC), approved covert CIA assistance to the mujahideen, and signed a presidential directive on 25 July 1980 providing for increased targeting of Soviet nuclear forces.

Carter's sharp response was undercut to a certain extent by several developments. First, key U.S. allies rejected both economic sanctions and an Olympic boycott. Second, Argentina and several other states actually increased their grain sales to Moscow. Third, a somewhat jaded American public tended to doubt the president's assertions about Soviet motives and believed that he had needlessly reenergized the Cold War.

Ronald Reagan, who defeated Carter in the November 1980 presidential election, took an even harder stand with the Soviets. Describing the Soviet Union as an “evil empire” that had used détente for its own nefarious purposes, the Reagan administration poured vast sums of money into a massive military buildup that even saw the president push the development of the Strategic Defense Initiative (SDI)—labeled “Star Wars” by its critics—a missile defense system dependent on satellites to destroy enemy missiles with lasers or particle beams before armed warheads separated and headed for their targets. The Soviet response was to build additional missiles and warheads.

The mujahideen resorted to guerilla warfare, their primary goal being to avoid defeat in the hopes of outlasting Soviet intervention.

Meanwhile, confronted with guerrilla warfare in Afghanistan, the USSR remained committed to waging a limited war and found itself drawn, inexorably, into an ever-deeper bloody quagmire against a determined opponent whose confidence and morale grew with each passing month. To make matters worse for Moscow, domestic criticism of the war by prominent dissidents such as Andrei Sakharov appeared early on, while foreign assistance in the form of food, transport vehicles, and weaponry (especially the Stinger antiaircraft missile launchers) from the United States began reaching the mujahideen as the fighting dragged on.

Neither the commitment of more troops, the use of chemical weapons, nor the replacement of the unpopular Kemal could bring Moscow any closer to victory. Accordingly, by 1986 the Soviet leadership, now headed by the reformist General Secretary Mikhail Gorbachev, began contemplating ways of extricating itself from what many observers characterized as the “Soviet Union's Vietnam.”

In April 1988, Gorbachev agreed to a United Nations mediation proposal providing for the withdrawal of Soviet troops over a ten-month period. One month later the departure of Soviet military forces, which had grown to an estimated 115,000 troops, commenced—a process that was finally completed in February 1989.

Although the Soviets left Afghanistan with a procommunist regime, a team of military advisors, and substantial quantities of equipment, the nine years’ war had exacted a high toll, costing the Soviets an estimated 50,000 casualties. It seriously damaged the Red Army's military reputation, further undermining the legitimacy of the Soviet system, and nearly bankrupted the Kremlin. For the Afghans, the war proved equally costly. An estimated 1 million civilians were dead, and another 5 million were refugees. Much of the country was devastated.