Southeast Asian nation located on the Indochinese peninsula. About the size of the U.S. state of Oklahoma, Cambodia encompasses 69,900 square miles. It is bordered to the northwest by Thailand, due north by Laos, to the east and southeast by Vietnam, and to the southwest the Gulf of Thailand. An overwhelmingly Buddhist nation, Cambodia had a 1945 population of approximately 3.5 million people.

Few countries endured conflict and suffering during the Cold War more than Cambodia. Through the legacy of colonialism, the struggle for independence, untenable neutrality, civil war, genocide, and occupation, Cambodia witnessed some of the worst horrors in modern history.

From ancient times, Cambodia was always at the center of conflict in Southeast Asia. Once the seat of the magnificent Khmer Empire, by the early nineteenth century Cambodia was little more than a tributary state, contested between the Siamese (Thai) and Vietnamese. In 1863 Cambodian rulers agreed to the establishment of a French protectorate, at least in part to rid themselves of Siamese and Vietnamese influences. Rebellions against French rule began almost immediately, culminating with a national uprising in 1884. France, however, maintained control until World War II.

With the fall of France in June 1940, Indochina came under the rule of the collaborationist Vichy government. In August 1940 it was forced to allow access to Japanese troops. By the end of 1940 Vichy Indochina was at war with Thailand, which took advantage of French weakness to reclaim “lost” territory in Cambodia and Laos. The Franco-Thai War was ended by Japanese mediation in February 1941 but had significant effects on Indochina. First, France was humiliated and its rule fundamentally undermined. Second, Thai aggression greatly angered Cambodians. Third, by intervening, Japan demonstrated support for anticolonial movements in Southeast Asia. All of these factors naturally invigorated Cambodian nationalism.

The Japanese did not, however, endorse Indochinese nationalisms as originally hoped. Rather, they allowed the Vichy government to suppress them. Only in March 1945, with the war decidedly against them, did the Japanese take formal control of Indochina, encouraging declarations of independence in Vietnam, Laos, and Cambodia. Cambodia's independence Page 354  |  Top of Articledeclaration came on 13 March 1945, made by twenty-three-year-old King Norodom Sihanouk. By August, however, French rule had been restored. Anti-French guerrillas, the Khmer Issarak (Free Khmer), assembled a government-in-exile in Thailand, while other Cambodian nationalists joined the Viet Minh, fighting against French rule in neighboring Vietnam.

Weakened by World War II and facing enormous difficulties restoring its empire in the region, by 1949 France moved slowly toward Indochinese independence. Sihanouk took control of the nationalist movement, but in fact Cambodians were deeply divided over their future rule. There was an array of political parties, each with a different approach to independence. The Krom Pracheathipodei (Democratic Party) attracted intellectuals, many of whom had joined the Khmer Issarak. They considered Sihanouk a traitor and a French collaborator. The Kanaq Sereiheap (Freedom Group or Liberal Party) was particularly strong among the conservative commercial elite and favored the status quo and the retention of the monarchy. Communism, represented by guerrillas operating under the banner of the Khmer People's Revolutionary Party (KPRP) and controlled by the Viet Minh, also had its appeal.

Amid this divisive confusion, Sihanouk emerged as the only plausible solution, and in early 1953 he began a world tour to generate support for Cambodian independence. When that failed, he dramatically offered his life in exchange for nationhood. When negotiations with the French proceeded too slowly, he went into voluntary exile. With France's war in Vietnam going poorly, the French finally agreed to limited Cambodian autonomy in October 1953.

Cambodia was granted full independence under the terms of the 1954 Geneva Accords. This, however, did not bridge Cambodia's political divisions. In fact, these became more acute once the French were gone. Encouraged by his early success and yet frustrated by opposition, Sihanouk decided to abdicate the throne in March 1955 and stand for election. Victorious, “Citizen Sihanouk” dominated Cambodian politics until 1970 but was never able to mend Cambodia's fractures, especially as the war next door in Vietnam spilled over into Cambodia.

Sihanouk's party, the Sangkum Reastre Niyum (Sangkum, or Popular Socialist Community), was, in effect, Cambodia's only political party. It revolved exclusively around him and, based on his popularity, won every seat in the National Assembly in the 1955, 1958, and 1962 elections. However, Sihanouk's domination was ultimately Sangkum's downfall. Fissures emerged within the party as the 1960s unfolded, mostly over Cambodia's neutrality in the Vietnam War. By 1967, those on the far Left criticized Sihanouk for not supporting the Vietnamese revolution against Western imperialism, and many defected to join the KPRP. At the same time, those on the Right asserted that Sihanouk's neutrality had become hopelessly compromised by North Vietnamese communists using Cambodia as a sanctuary in their fight against the Americans and the South Vietnamese. Prominent critics on the Right included the Cambodian military, which by 1970 had decided to topple Sihanouk.

The army coup came in March 1970 while Sihanouk traveled abroad. It coalesced around General Lon Nol, Sihanouk's prime minister, with the Page 355  |  Top of Articleblessing of the U.S. government, which had lost patience with Sihanouk and his compromised neutrality. Sihanouk fled to the People's Republic of China (PRC), where he formed an opposition government-in-exile. This put him in a loose alliance with Cambodian communists, many of whom had left the KPRP to join the more radical Communist Party of Kampuchea (CPK), better known as the Khmer Rouge (Red Khmer). The Khmer Rouge had been founded in 1960. Sihanouk had ruthlessly suppressed the movement, and it remained divided and weak throughout most of the 1960s. But the Khmer Rouge, supplied by North Vietnam, began an insurgency in 1968 that intensified after Lon Nol's coup. Bombings of eastern Cambodia and incursions by U.S. and South Vietnamese forces against communist sanctuaries there galvanized Khmer Rouge support. In addition, Lon Nol's government was notoriously corrupt and inefficient, and many Cambodians deeply resented it. By 1973, when the United States withdrew its troops from Vietnam, Lon Nol was already in serious trouble. Even large-scale bombings of Khmer Rouge positions by the Americans could not prevent the collapse of his government.

Lon Nol's government came to an end in April 1975, just two weeks before the North Vietnamese seizure of Saigon. Almost immediately after taking control of Phnom Penh, the Khmer Rouge and its leader, Pol Pot (Saloth Sar), implemented one of the most monstrous regimes in history. Adopting an ultranationalist, radicalized communism, the Khmer Rouge attempted to eradicate from Cambodia any vestiges of its colonial past.

The country was renamed Democratic Kampuchea (DK). In place of the monarchy, the mysterious, distant, and authoritarian Angkar Loeu (Upper Organization) of the Khmer Rouge elite ruled. Sihanouk returned to the country in late 1975 but had no power. Increasingly uneasy in the midst of Khmer Rouge radicalism, he again left for exile in early 1979. Under the Khmer Rouge's brutal rule, millions of Cambodians were forcibly moved from towns and cities into the countryside to work on collective farms. Urban centers, considered obstacles to the so-called people's revolution, were all but abandoned. Severe food shortages caused by the move led to widespread malnutrition and disease, which claimed many lives. Offers of foreign aid were declined, adding to the misery. Private property, money, businesses, and religion were all banned. People who wore glasses or had fair skin were deemed to be capitalists and were severely punished. 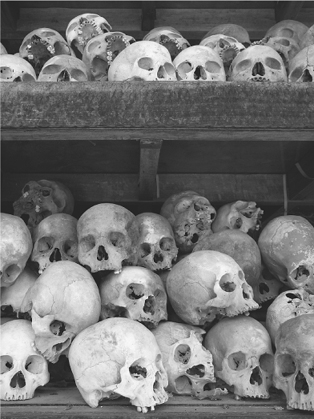 Piles of skulls and bones memorializing as many as 2 million victims of the Khmer Rouge killing fields. (iStockPhoto.com)

Family ties and even individual personalities were considered counterrevolutionary. Wholesale executions were commonplace, especially among former government officials, the military, bureaucrats, intellectuals, business-people, and members of the Buddhist clergy. Many Cambodians simply disappeared, their bodies dumped in Cambodia's infamous killing fields. During the period of Page 356  |  Top of ArticleKhmer Rouge rule between 1975 and 1978, it is estimated that nearly 2 million Cambodians were killed, or approximately one in six Cambodians, making it one of the worst genocides in modern history.

Systematic executions of ethnic Vietnamese in Cambodia and heated border disputes were the final sparks that led to war.

The end of Khmer Rouge rule came in December 1978 when Vietnamese forces invaded Cambodia. Communism could not overcome centuries-old tensions between the two nations, and their differences over the Sino-Soviet split had only aggravated matters. Systematic executions of ethnic Vietnamese in Cambodia and heated border disputes were the final sparks that led to war. Internal divisions, which had plagued the Khmer Rouge from the outset, prevented it from mobilizing any real opposition. Moreover, the Cambodian people had suffered so much that there was little resistance. Within two weeks, DK was occupied, and the Khmer Rouge returned to the jungles and guerrilla warfare. Their hopes were briefly lifted when in February 1979 Chinese and Vietnamese forces clashed along their common border, ostensibly over control of Cambodia. When the Chinese withdrew after just a few weeks, however, the Khmer Rouge's best chance of restoring its rule faded.

Vietnamese forces occupied Cambodia for nearly fifteen years. They supported a puppet government led by former Khmer Rouge officials who had fled or had fallen out with the Pol Pot clique. Throughout this period the Khmer Rouge launched attacks against the government from bases in western Cambodia, supported clandestinely by China and Thailand. A coalition of other noncommunist opposition groups also fought the occupation, most under the symbolic leadership of Sihanouk—with the blessing of many Western governments. Internationally sponsored peace talks led to the withdrawal of Vietnamese forces beginning in early 1992. But for Cambodia this was only a small step toward peace. Disarming the various factions and establishing a new government were gargantuan tasks. Today, Cambodians are confronting their bloody past and rebuilding a nation ripped apart by the convulsions of the Cold War.

Becker, Elizabeth. When the War Was Over: Cambodia and the Khmer Rouge Revolution. New York: Public Affairs, 1998.