On 25 December 1978, Vietnamese armed forces invaded Cambodia, ushering in an occupation lasting nearly thirteen years. This incursion marked the first and only extended war between communist regimes and led to a brief but bloody border war between Vietnam and the People's Republic of China (PRC). Moreover, the occupation added to the tremendous suffering that Cambodia endured during the Cold War and greatly affected Southeast Asia.

The origins of the Vietnamese-Cambodian conflict are complex and reach far back into history. The Vietnamese and Khmer (Cambodian) Empires had been bitter rivals for centuries. By the early 1800s, much of Cambodia had come under Vietnamese rule or was forced to pay tribute to it. This gave rise to deep-seated animosities that survived decades of French colonial rule, Japanese occupation during World War II, and two Indochinese conflicts spanning nearly thirty years.

Communist rhetoric and ideology masked these tensions but could not overcome them. Vietnamese and Cambodian communists cooperated in the fight against American-sponsored regimes in Saigon and Phnom Penh. In fact, Vietnamese support was essential to the 1975 communist Khmer Rouge (Red Khmer) victory in Cambodia. However, common ideology did not bridge their historical and ethnic divisions. The Khmer Rouge feared that a unified Vietnam, even if communist, would again dominate Cambodia. Leaders in Hanoi worried that the Khmer Rouge was too dependent on Beijing and feared the extension of Chinese power in Southeast Asia.

These anxieties were inextricably linked to international developments. During the 1960s the Sino-Soviet split widened, and the Democratic Republic of Vietnam (DRV, North Vietnam) aligned itself more with the Soviet Union, alienating the PRC. After reunification in 1975, Vietnam purged its ethnic Chinese minorities and relied even more on Soviet aid. In this light, the PRC came to consider Vietnam a rival in Southeast Asia and an extension of Soviet power. The United States also played an important role, particularly through détente with the Chinese. Thus, by the late 1970s a bizarre diplomatic arrangement emerged in the region, pitting the Americans and Chinese, formerly fierce enemies in the Cold War, against the Soviets and Vietnamese.

Within this complicated international context, local tensions resurfaced soon after both the Vietnamese communists and the Khmer Rouge seized power in 1975. Hanoi denounced the regime in Phnom Penh as reactionary for its infamous genocide in the killing fields. The Khmer Rouge demanded that Vietnam return historically disputed lands and leveled allegations that Hanoi was plotting to divide Cambodia via the country's ethnic Vietnamese population.

Cross-border raids by poorly equipped Khmer Rouge forces into Vietnam and atrocities committed against ethnic Vietnamese living in Cambodia worsened the situation between the two countries. Paranoid Khmer Rouge leaders may have believed that war with Vietnam would galvanize Cambodians behind their regime, but the exact opposite happened. When Vietnam Page 358  |  Top of Articlelaunched its invasion on 25 December 1978, the Cambodian people offered no resistance. Indeed, after three years of terror under the Khmer Rouge, many Cambodians welcomed the Vietnamese as liberators. Three Cambodian regiments, equipped by the Vietnamese and made up mostly of those who had fled the Khmer Rouge, took part in the invasion. 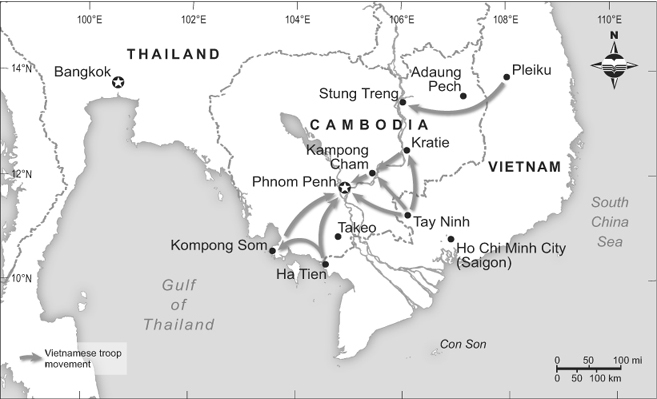 Some speculate that the Vietnamese invasion was originally designed to stop at the Mekong River, but meeting only sporadic resistance, Hanoi decided to push on. Phnom Penh fell on 7 January 1979, and Khmer Rouge forces withdrew to the west. Operating from the remote jungles bordering Thailand, they carried out guerrilla warfare against the Vietnamese and their puppet Cambodian government led by Heng Samrin.

Alarmed by the prospect of a Vietnamese-dominated Indochina, the Chinese decided to take action. On 17 February 1979, 120,000 Chinese troops attacked Vietnam. After pushing 25 miles into Vietnam, PRC forces then halted. By 16 March, Beijing withdrew, claiming that it had taught Hanoi a lesson. In fact, Vietnamese forces had inflicted considerable punishment on the invading Chinese.

Hanoi maintained that its invasion was humanitarian in seeking to overthrow the genocidal Khmer Rouge, but except for the Soviet bloc Vietnam was condemned by the international community. The United States and the PRC led the condemnations. Together with Thailand, the two powers began supporting Cambodian resistance movements. One, the noncommunist Khmer People's National Liberation Front (KPNLF), was led by former Page 359  |  Top of Articlegovernment minister Son Sann. The other, the Front Uni National pour un Cambodge Indépendant, Neutre, Pacifique, et Coopératif (FUNCINPEC), pledged allegiance to deposed Cambodian King Norodom Sihanouk and postured as the government-in-exile of Cambodia. The U.S. government extended military assistance to these noncommunist groups, but in fact much of the aid reached the Khmer Rouge.

Although these two groups operated independently, they were part of a de facto alliance with the Khmer Rouge, and the three maintained a fierce resistance well into the 1980s. Chinese support of the Khmer Rouge was a key factor in the insurgency. In June 1982, intermediaries from the Association of Southeast Asian Nations (ASEAN) helped negotiate the tripartite Coalition Government of Democratic Kampuchea (CGDK). The arrangement made the noncommunist groups the public face of Cambodian resistance, while the Khmer Rouge retained mostly military power.

Substantial Vietnamese forces were committed to fight the CGDK, but from bases in Thailand its guerrillas operated largely beyond reach. Frustrated, in 1985 the Vietnamese tried clearing the jungle and building barriers along the Thai border. They also mined the area and began shelling refugee camps believed to be guerrilla safe havens. There were even clashes between Vietnamese and Thai forces during the late 1980s. 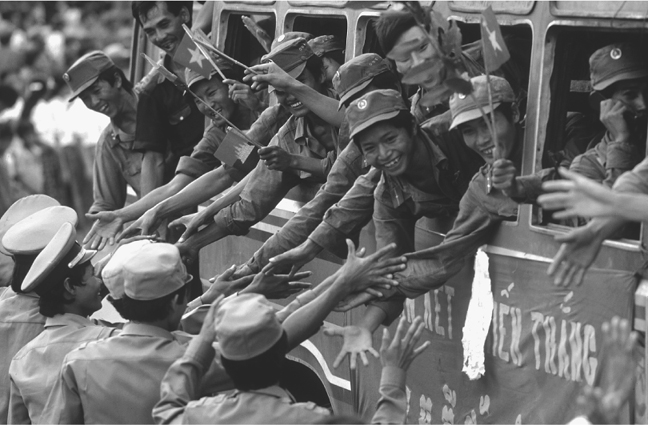 By 1989, however, Hanoi had developed other priorities. The occupation of Cambodia was not only a financial and military drain but was also a Page 360  |  Top of Articlediplomatic liability. Indeed, diplomatic isolation had seriously handicapped economic development, and Soviet support declined as communism in Eastern Europe collapsed. Improving relations with the United States and the PRC, deemed essential to Vietnamese security, became Hanoi's focus, and this necessitated a withdrawal from Cambodia.

In September 1989, following almost three years of gradual withdrawal, Hanoi announced the removal of all Vietnamese forces from Cambodia. Despite Khmer Rouge claims to the contrary, most experts agree that by the beginning of 1990 Vietnam made good on the promise. This paved the way for international negotiations that resulted in the October 1991 signing of the Paris Agreements, which provided for the United Nations Transitional Authority in Cambodia (UNTAC). Its difficult mandate involved disarming all factions and securing the country ahead of national elections. Since 1992 Cambodia has struggled under the weight of its internal divisions, trying to cope with its tragic history.