Central African nation. Known as the Republic of Congo-Kinshasa until 1960, the Democratic Republic of the Congo during 1960-1971 and Zaire during 1971-1997, the Republic of the Congo-Kinshasa covers 905,963 square miles and borders on the Central African Republic to the north, Sudan and Uganda to the east and north, Burundi and Tanzania due east, Zambia to the southeast, and Angola to the southwest and has access to the Atlantic Ocean to the far east. The nation had a 1945 population of approximately 11 million people, some 34,000 of whom were Europeans.

The Congo entered the Cold War era as part of the Belgian colonial empire but gained its independence on 30 June 1960. Hopes for a peaceful transfer of power faded as the divisions among the new political leaders manifested themselves in violence and the country descended into civil war. When Katanga and South Kasai, which contained the copper mines that provided Congo's main export, seceded only weeks after independence, President Joseph Kasavubu appealed for international help, and the United Nations (UN) sent in a peacekeeping force in July 1960. By 1965 the seceded provinces had been restored, but disagreements between Kasavubu and the newly elected prime minister, Moise Tshombe, threatened the fragile peace. Stating his determination to bring order to the Congo, General Joseph-Désiré Mobutu, commander in chief of the armed forces, seized power in November 1965.

Fearing that a power vacuum might develop that would provide fertile ground for further Soviet expansionism in Africa, the United States declared its support for the Mobutu junta, as did most other African countries. Mobutu proclaimed himself “Father of the Nation” and consolidated his hold on power by eliminating the office of prime minister in 1966 and by abolishing all political parties except the newly formed Popular Movement of the Revolution (MPR) in 1967. Although elections took place beginning in 1970, the single-party state plus the fear engendered by the brutality of Mobutu's regime ensured his victory in every election until his overthrow in 1997. In May 1967 he announced the fundamental doctrines that would govern policy: authenticity, nationalism, and revolution. African authenticity came from eliminating the remnants of colonialism, particularly from geographical and personal names. In 1971 the Congo became Zaire, for example, and by the following year the capital, Leopoldville, was Kinshasa; Katanga was Shaba; and the president renamed himself Mobutu Sese Seko.

Nationalism meant, in particular, economic independence. Mobutu began in 1967 with a stabilization plan that nationalized the copper industry and Page 475  |  Top of Articlebrought the economy under state control. In November 1973 he took economic nationalism to its extreme with the policy of Zairianization, designed to remove all foreign influences and return control of the economy to Zairians. All land, businesses, and industry were initially taken over by the state and then were made available for purchase by Zairian citizens. However, favoritism and corruption governed the reallocation process, and often the new owners engaged in asset stripping, increasing their personal wealth to the detriment of the country. In November 1975 Mobutu attempted to address the problem by allowing foreign ownership again, but with little success. Instead of demonstrating economic independence, Zaire became more reliant on foreign aid and international loans to prevent economic collapse.

Mobutu publicly proclaimed that revolution signified international independence, but he maintained a special relationship with the United States, which valued Zaire's mineral wealth and strategic location. Although Mobutu's dictatorship and abysmal human rights record often tested the relationship, he was expert at playing the Cold War game to ensure continued American support by threatening to align instead with the Soviet bloc. The importance of the Cold War to Mobutu's foreign policy strategy was highlighted when civil war broke out in neighboring Angola in 1975. While most African nations supported the Popular Movement for the Liberation of Angola (MPLA), Zaire joined the United States in opposition because of the involvement of the communist bloc on the side of the MPLA.

The brutality of Mobutu's dictatorship guaranteed opposition to his rule, and his insecurity was exacerbated by the weakness of the Zairian Army (FAZ), a weakness glaringly apparent when MPLA forces drove the army from Angola in chaos. When in March 1977 the Front for the National Liberation of the Congo (FLNC) invaded Zaire's Shaba province, intent on ousting Mobutu, he feared that the army was incapable of protecting his position. Asserting that the communist-backed MPLA had trained and armed the FLNC, Mobutu demonstrated his competence at playing the Cold War game by successfully appealing for international assistance. The Americans took the lead in providing military aid, while Morocco sent combat troops. In May 1977 a joint Moroccan-Zairian force regained control of Shaba but allowed the FLNC to withdraw to Angola and regroup. A year later, the FLNC invaded Shaba a second time, succeeding in seizing the key mining center of Kolwezi. Again Mobutu received international aid. Troops from Morocco, France, and Belgium helped to repel the invasion, and Morocco agreed to maintain a peacekeeping force in Zaire to deter further attempts.

During the 1980s Mobutu retained U.S. support for his regime, particularly by invoking the Reagan Doctrine, which pledged support to those resisting communism in the developing world, but internal dissent was increasing and, as the Cold War drew to a close, international opposition also intensified. With Soviet expansionism no longer a concern, Congress expressed concern about the human rights record of the Mobutu regime and terminated all but humanitarian aid to Zaire in 1990. With the economy on the brink of collapse and with increasing violence from protesters, Mobutu agreed to political reforms in December 1990, including multiparty elections. 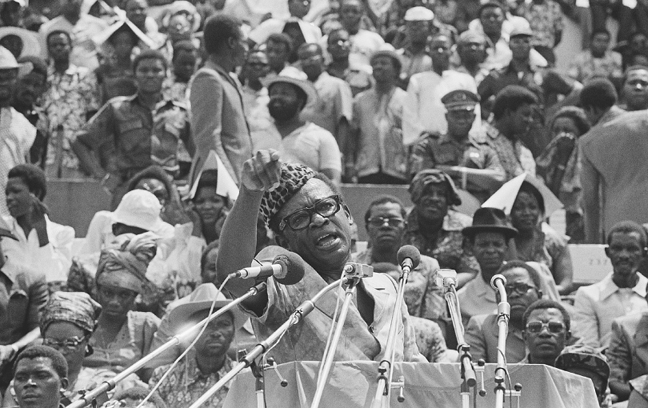 Thus Zaire entered the post-Cold War era among rumors of democracy, but Mobutu's control deteriorated, and he was ousted in May 1997.