The involvement of the United States and the Soviet Union with opposing factions in the Congo Civil War transformed a nationalist struggle for control in the newly independent country into a Cold War battleground. The conflict began in July 1960 and comprised three main phases. The first was the secession of the Katanga and South Kasai provinces and the ensuing struggle to restore them to the nation. The second phase was the battle for control between the opposition governments of Joseph Kasavubu and Patrice Lamumba, and the third was the fight for power between Kasavubu and Moise Tshombe. Throughout the five-year conflict, the United States supported Kasavubu, while the communist bloc provided assistance to his main opponents. The interlocking conflicts were finally resolved when army chief of staff General Joseph Désiré Mobutu (Mobutu Sese Seko) seized power, with American support, on 24 November 1965, presenting the Americans with a perceived victory.

Hopes of an orderly transfer of power from Belgian colonial rule ended when dissatisfaction throughout the Congo turned violent. An army mutiny on 5 July 1960 was followed by the secession of two provinces: Katanga (Shaba) on 11 July and South Kasai on 8 August. As rioting spread, Belgium sent in troops to protect the lives and property of its citizens. Faced with the disintegration of their country and an unauthorized foreign intervention, President Kasavubu and Prime Minister Lumumba appealed to the United Nations (UN). On 14 July 1960, a UN resolution called for the withdrawal of Belgian troops and organized a UN military force to restore order. Although the United States supported the UN action, there was increasing concern that Lumumba's leftist political orientation might provide an opportunity for communist infiltration. Thus, President Dwight D. Eisenhower authorized covert action to oust Lumumba and cultivate pro-Western leaders, such as Kasavubu and Mobutu.

On 5 September 1960 Kasavubu dismissed Lumumba as prime minister, initiating the next phase of the war. Asserting that this action exceeded Kasavubu's constitutional authority, Lumumba, in return, dismissed the president. As conflict loomed, Mobutu took control and ordered Lumumba's arrest. In response, Antoine Gizenga, as leader of the Lumumbists, established an alternative government at Stanleyville (Kisangani) in November. By the end of 1960, the Congo was divided into four warring regions: Katanga under Tshombe's leadership, South Kasai led by Albert Kalonji, the western Congo under Mobutu's control, and the eastern regions under Gizenga. 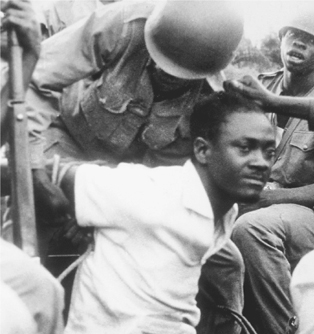 His arms roped behind him, ousted Congolese Premier Patrice Lumumba is captured by troops of strongman Colonel Mobutu Sese Seko in 1960. Lumumba was killed in early 1961 under mysterious circumstances, exacerbating the violence that began shortly after independence and continued for years under Mobutu's dictatorship. (Bettmann/Corbis)

When the world learned in February 1961 of Lumumba's death while in government custody, protests erupted against Mobutu's regime. The USSR formally recognized Gizenga's government, while the United States declared its support for Mobutu's government in Leopoldville Page 480  |  Top of Article(Kinshasa). By the summer of 1961, with direct UN action and indirect U.S. action, Mobutu defeated Gizenga's rebel regime and ended the Kasai secession. Civilian control returned in July when an agreement was reached for the formation of a coalition government containing representatives from all three factions. Kasavubu resumed the presidency, with Cyrille Adoula as prime minister.

Tshombe, however, refused to join the coalition government, continuing to assert Katanga's independence. His recalcitrance encouraged the Lamumbists, and the coalition began to collapse. Gizenga left the government, joined forces with Tshombe, and by November 1962 directly threatened Adoula's rule. When the Soviets offered Adoula military aid, the United States urged the UN to act. On 28 December 1962 Belgian troops supplied and financed by the Americans led the UN operation to restore Katanga to the Congo. On 21 January 1963 Tshombe, realizing defeat was inevitable, surrendered, ending the Katanga secession.

Gizenga, however, continued to oppose the Kasavubu-Adoula regime with support from the communist bloc and by the summer of 1964 controlled more than half of the Congo's territory. Fearing that Kasavubu was not strong enough to withstand the Lamumbist advance, the United States stabilized the government by pressuring Kasavubu to accept Tshombe, a staunch anticommunist, as prime minister while persuading Belgium to provide military support for the Congolese Army, enabling it to defeat the Lumumbist insurgency.

Although 1965 began with a seemingly unified Congo, a power struggle developed between Kasavubu and Tshombe, both of whom wanted executive control. When they attempted to oust each other, civil war again threatened. But on 24 November 1965, Mobutu, allegedly with U.S. support, dismissed all the politicians and assumed power, thereby ending the Congo Civil War.